RUSH: I gotta get a call here first because this is something that I saw while I was out that I had near the top of the Stack today. So we’re gonna go to Raleigh. Paul, glad you called, sir. Welcome to the EIB Network. Hello.

CALLER: My question for you is, does your percentage of being right go up when you call Meet the Press, Meet the Depressed, with the news out of NBC and the psychologist checking out David Gregory.

RUSH: You know, is this not the most amazing story? I mean, I’ve got a Stack here today that I could call everything in it, is it not the most amazing thing you’ve ever heard? There’s four or five of ’em in the Stack. I don’t know which one’s more amazing than the other. My accuracy rating ought to go up, you’re absolutely right. I’ve been calling the show Meet the Depressed for years. Paul, what have you heard about this? I’m gonna be up to speed with the latest ’cause you’ve been out there consuming the news on it. What’s the latest you’ve heard on this? What do you think you know about this story?

CALLER: I don’t know how accurate I have it, but NBC hired a psychologist to check out David Gregory and his family and friends.

RUSH: Yeah, but why?

CALLER: Because of the ratings.

“Friends of Gregory and even his wife were interviewed by a psychologist commissioned by NBC to find out how the host of the flagship Sunday morning show might relate to audiences better.”

Hey, this is so simple. It’s not Gregory; it’s liberalism. If you get somebody to host the program that knows there is a Missouri and a Nebraska and a Texas and doesn’t think you need a visa to get into ’em, you’ve got half the problem solved. Find out how they might relate to audiences better. I don’t have that problem. I haven’t needed any psychological analysis here.

“The Washington Post reported, ‘Last year, the network undertook an unusual assessment of the 43-year-old journalist, commissioning a psychological consultant to interview his friends and even his wife.’

‘The idea, according to a network spokeswoman, Meghan Pianta, was “to get perspective and insight from people who know him best.” But the research project struck some at NBC as odd, given that Gregory has been employed there for nearly 20 years.'”

Exactly right. What do they not know about the guy?

“The days of ‘Meet the Press’ ruling Sunday mornings seem a long time ago — now it is in third place. During the first three months of this year, the NBC program finished behind rivals ‘Face the Nation’ on CBS and ‘This Week With George Stephanopoulos’ on ABC. In the final quarter of last year, viewing of ‘MTP’ among people ages 25 to 54, the preferred group for TV news advertisers, fell to its lowest level ever. ‘I get it,’ Gregory told the Washington Post, ‘Do I want to be number one in the ratings? Every week I want to be number one, and we fight like hell to get there. And itÂ’s tough right now. ItÂ’s a fight.’

Look. This is not hard. If you view half the country with disdain, if you view the way over half the country thinks with derision, you are going to produce a program that reflects that. Now, who in the world wants to watch a program where what they think and what they believe and what they cherish and what they hold dear is gonna be laughed at, mocked, and made fun of every Sunday? Meet the Press long ago ceased being a news program. When Tim Russert passed away and passed the torch, it ceased being a news program. It became an agenda arm of the Democrat Party. The old audience of Meet the Depressed didn’t view it that way. This really is a mind-boggling thing. Why wouldn’t you fire the guy and go hire somebody the audience likes?

If you don’t want to fire him because that would look bad for the news and look bad for liberalism, just like firing Dan Rather would, reassign him to something. You know, put him somewhere where the audience likes him. Give him the Moscow bureau assignment or whatever. Send him over to North Korea, let him shine some light there. He could relate to people there, I guess. Send him to Beijing. I don’t know. Maybe Havana, try to open a new pathway. But this is just mind-boggling. (laughing) Are they telling us that there’s nobody that’s better psychologically prepared at NBC to host this show?

Hell, I could do it. I could bring the ratings of this show back to where they were inside of a month, with no guests! Inside of a week, with no guests! That’s the problem. They’d make me do guests. I mean, it’s Meet the Press. That reminds me. I may have mentioned this to you people once. Back in Sacramento, oh-ho, what a story this is. I swear to you it’s the truth. I’m standing across the glass from a guy who knows the guy who did this and could attest to it if it ever came to that. The manager of the station came to me one day and said, “You know what? You seem out of sorts. You just don’t seem happy. You seem sort of down in the dumps. Are you feeling a little bit depressed?”

I thought the guy was being compassionate and supportive. I said, “Well, no, I’m just adjusting to the move.”

I said, “You want to send me to a mental rehab joint for the sole purposes of me admitting I’m depressed so that when I come out I can tell this audience what a great bunch of people at this clinic are who got me un-depressed?” 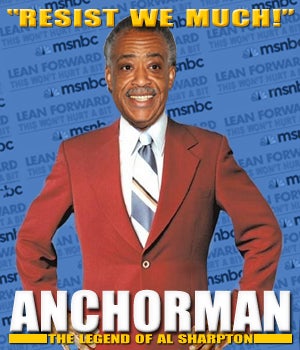 Honest. That’s the closest anything like this has ever happened to me. I refused to do it when I realized what was going on. The guy actually tried — you should have seen this. He actually came to me as one of the most caring, “You know, you really seem down in the dumps. I love you, man. I mean, you have every reason in the world to be happy.” And the reason was that I had established at that time this ability. Anyway, that’s the closest I’ve come to anything like this. But I saw this story, I still can’t get over it. This story tells me how much, not just broadcasting, but how much our culture is changing than any other story I’ve seen. It’s hard for me to comprehend this. And Gregory seems unfazed. I would be so profoundly embarrassed. I’d go hide in a hole. I would be doing anything I could.

RUSH: Maybe they could send David Gregory over to MSNBC and send Al Sharpton over to moderate Meet the Press. Who knows. Shake things up.

RUSH: I don’t want to make a big deal. I just can’t understand, you’ve got a host that nobody wants to watch and you get a psychiatrist, psychologist to go talk to him and his wife and his friends to figure out how to make him more likable? In the old days you’d just replace him and reassign him. “Maybe it’s a new world, Mr. Limbaugh, and they just don’t fire people anymore.” Well, I know that’s not true. People get fired left and right. It’s different, and it may be nobody wants to admit that anybody made a wrong decision putting the guy in there, but I have never heard of anything like this.

It may have gone on before and nobody ever knew about it, but I think NBC ought to be doing psychological tests on their executives, if they really want to get to the root of what’s wrong, because it isn’t David Gregory. I mean, what in the world, what kind of psychological mess explains MSNBC, and NBC News overall.

From the Washington Post story on this. “Despite the failing ratings, Gregory renewed his contract in 2013 and network executives said as recently as March that they are committed to improving the show with him as host.” That’s just insane. You got all this evidence that it isn’t working, and you re-up. It’s a different world out there.