RUSH: Here’s Joe in Chicago. Joe, great to have you on the EIB Network. I’m glad you waited to appear. Hello.

CALLER: Oh, you’re welcome. And it’s a big thrill. Thanks for all you do, Rush.

CALLER: We love you here.

CALLER: So, Rush, the sad thing about the Sterling affair from the way I see it is it shows how uncivilized we’re becoming, and I think it’s proof to your political motivation theory. For example, the use of the term “racist”, you know, that really refers to someone who commits violence against other group or really wishes another group harm. This man was definitely prejudiced. I didn’t hear anything that was racist. I heard he’s a bigot. Maybe he’s a bigot. That’s kind of a stronger word. But why has the media jumped out and gone right to the word “racist”?

CALLER: It’s in all the news reports and it just proves your point, Rush, that it’s being done for political purposes, and it’s just despicable.

RUSH: Well, it is, but, look, arguing over the definition of “racism” here isn’t gonna change anybody’s thinking on this. I mean, all you have to do to be racist is criticize somebody. Criticize a minority, you’re racist, that’s all you have to do.

CALLER: Right. To jump to the extreme definition for use to silence any opposition, like, you know, your theory about the owner of — is it in Florida, the DeVos family?

CALLER: Over gay marriage. That’s why we love what you do, Rush. You give us insight. You really figure this stuff out for us.

RUSH: Well, I appreciate that. What that is, that is fascism. That is fascism. And, by the way, it is being eagerly applauded by a lot of people in this country. This totalitarian use of force, this authoritarian use of power to punish, silence anybody that says something you don’t agree with or you don’t like. They don’t have to do anything. All they’ve gotta do is talk or write or say something that you happen to disagree with.

Look at the global warming crowd. There are actual attempts here to criminalize opposition to global warming, put people in jail for it around the world. It’s not just a domestic thing here. But I’m telling you that the facilitating agent for all of this in this country is the Democrat Party. The Democrat Party is the home. Every one of these people that we’re talking about, including Sterling, votes Democrat. Everybody involved, everybody making a big deal, everybody in the media, everybody all hopped up about this, they’re all Democrats. They all vote for Democrats. 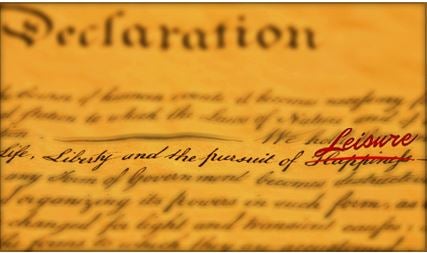 Practically every virtue and every tradition that went into building this country is under assault right now. And that’s what we find ourselves in the middle of. You can say it’s always been there, and it’s been effervescing and bubbling up and finally now it’s boiled over. But why has it boiled over it if it’s always been there? Why did nobody tamp it down? In order to keep the peace, why have efforts been made to victimize people and punish — well, no. Why has the Democrat Party willfully, eagerly, happily put people in groups, made them victims, put them on the welfare rolls, made their existence barely a subsistence? Why has there not been any effort to tamp down some of this animosity in the country and try to turn it into love?

Why has there not been an overall effort to inspire people to exercise the opportunity this country provides everybody today to be the best they can be? Where has that gone? Why is that missing? Why is now everybody a victim? Why is everybody owed something? Why is everybody a victim of the immoral, unjust founding of this country? It’s been a movement that’s been around since the beginning of the country. And rather than tamp it down, the Democrat Party has inspired it; the Democrat Party has promoted it.

It is the single source of their power: aggrieved, miserable, angry, unhappy people looking for the people they’re mad at to be gotten even with. Looking for the people they are mad at to be dealt with. Looking for the people that they’re mad at to be punished. And when it happens, they’re all happy, whether it improves their lives or not. And in most cases it doesn’t. But they don’t care because they’ve been conditioned to believe that somebody being punished, either taxes being raised or any other form of punishment, that’s justice. And the Democrat Party is the agent of that justice. The Democrat Party’s facilitating all this. That’s where its home is. None of this would be working if there were not a significant political power base propping it up as a foundation.