RUSH: I mentioned yesterday before the program — (interruption) wait a minute. What’s this? Oh, yeah, yeah, somebody just sent me a gentle reminder note that I was going to talk about this. I put it at the stop of the stack at the break at the top of the hour. Washington Post story. It’s actually a column by a far left fanatic by the name of Harold Meyerson. Does that name ring a bell? It should. He dates back to the Clinton years and he’s at some think tank, or was. He’s now a columnist at the Washington Post. He’s one of these Occupy Wall Street types. He may not be an actual Occupier.

“CaliforniaÂ’s Bid to Tax Companies Who DonÂ’t Share the Wealth — Last week, a committee of the California Senate not only talked about economic inequality — everybodyÂ’s doing that — but actually did something about it. By a 5-to-2 vote, it recommended to the full Senate a bill that would cut the stateÂ’s taxes on companies with lower ratios between their chief executivesÂ’ pay and the pay of their median workers, and raise taxes on companies with the kind of insanely high gap between chief executive and median worker pay that has become the norm in American business.

“To the best of my knowledge, the bill — SB 1372 — is the first in the nation that seeks to mitigate economic inequality through corporate tax reform. At a time when all the traditional institutions that enabled workers to win raises have broken down, it offers a way forward for those whoÂ’d like to see workers make a fair dayÂ’s pay for a fair dayÂ’s work. … The proposed legislation wouldnÂ’t exactly plunge CEOs into poverty. It would reduce, on a sliding scale, CaliforniaÂ’s corporate taxes — currently set at 8.84 percent of net income — for any company paying its chief executive less than 100 times the pay of its median worker, and raise them, also on a sliding scale, for any company paying its CEO more. (Under the terms of the Dodd-Frank financial reform act, the Securities and Exchange Commission is required to publish the CEO-median worker pay ratio for every publicly listed company. The SEC is expected to begin this practice this year.)”

Did you know that was part of Dodd-Frank? I had forgotten it. Meyerson is a proud socialist. If you’re still scratching your head over who this guy is, he’s a very proud card carrying socialist. Now, they tried this. Go back to the first term of the Clinton administration. If you’ll recall, and I need to bring this up because I need to ask everybody, why didn’t this work? The same subject, income inequality. It’s one of the things the Democrats constantly go back to when they need turnout. Minimum wage. War on women. Republicans are racist. They’re all Donald Sterlings. This kind of thing. That’s what income inequality is. 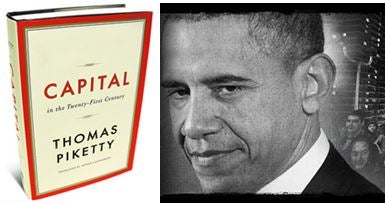 Do you realize there never has been any income equality in the history of the world? Not really. The closest that you get to it is communist countries where everybody’s poor and totally dependent on the government. That’s the closest you ever get to income equality. The Chi-coms are trying it. Cubans have pulled it off. Vladimir Putin is trying to reconstitute the Soviet Union for the same reason. But you’ll always notice that in those places where they try income equality there’s always an oligarchy, bazillionairs that lead everybody.

Let’s go back, just to remind you, back in 1993, ’94, part of Clinton’s first big tax act, they put a limit on the tax deductibility of corporate CEOs. That limit was $1 million a year. So a business could deduct, as a legitimate business expense, only $1 million of the salary paid to its CEO. And people applauded. “Well, that’s fair, man. That punishes all companies, that is really good. Now we’re talking.” All right, fine. So why don’t we have income equality because of that now? Why are we talking about it? That was 22 years ago. Why don’t we have income equality? How come the CEOs are still, in fact, doing better than they were back then?

Here’s what happened. Have you ever heard of stock options? (laughing) Have you heard of stock options? You have? Do you know how they came to be? They came to be right after Bill Clinton limited the tax deductibility of CEOs salary to $1 million. Boards of Directors still needed to hire the best people they could find, and when you’re in the market for the best it’s going to cost you because everybody wants the best. Everybody serious about their business wants the best. If you are judged to be the best at what you do, there’s going to be a lot of people pulling for you. So you need to be very creative as you offer work to the best.

So these crafty Chief Financial Officers came up with a trick. Stock option. The old stock option trick. They offered CEOs most of their compensation in stock options that would vest as the years went by and as the stock price went up there was always that incentive. So the CEOs took very little of their compensation every year in salary, but then it was reported at the end of every year they were earning 30, 40, 50 times their salary with stock options which were not subject to the law.

So it didn’t work. And we still don’t have income equality. And we still have people like Harold Meyerson ticked off at how much CEOs make. So he’s all happy that this California Senate Committee has come up with a new way to make sure we spread the wealth. But it isn’t going to work that way. What will happen is exactly what happened in 1993, a company, a CEO, board of directors, CFO, whatever, will find a way to lower that ratio between the CEO’s pay and the median worker’s pay and still compensate the CEO at the same amount of money he was earning. They will find a way to do it.

You’d go in and ask for a raise and they’d say, “I’m sorry. You know what? We were really thinking about giving you a raise but our hands are tied. There’s a federal law, and your salary is frozen.” But you would go to the grocery store and the prices didn’t seem to be frozen. The prices were going up.

So you’d go back to the and boss say, “Wait a minute. You told me that you really wanted to give me a raise but you can’t because federal law says wages and prices are frozen.”

“That’s right. We would love to give you a raise but we can’t.”

“Could you explain to me why the steak I wanted to buy at the grocery store costs more today than last week?”

“Well, I have no idea. I don’t know. I’m not in charge of the grocery store.”

What was happening was this: The butchers, the people that run the supermarkets, just invented new cuts of beef. Like the Red-Eye B or the On-the-Bone, Red-Eye 14 Cut — something that didn’t exist that was not subject to any price control — and charged through the nose for it since they couldn’t raise prices on anything else.

Because the wage and price controls went into effect on existing goods and services. All you needed was a new size can of peas. Just a couple more ounces. You could charge whatever you wanted for it. A new cut of beef. A new mutton chop, whatever. There were ways around it. It never works. Command and control never worked.

You pay people what you have to pay them. You’re worth what somebody will pay you. It’s that simple. That’s why you have to make yourself really valuable to people. Make yourself indispensable as best you can. They’re all excited about this income equality. It’s part of the election turnout.

It’s about turnout and promoting socialism, and getting the government in charge of all this stuff. They’re just so excited, they can’t see straight. But there never has been income equality. And, by the way, the gap between the rich and the poor? If you want to say that it’s growing, you have to make the point that the rich are getting richer under Obama far faster than they did under Bush.

You’ve gotta ask yourself: Why?

CALLER: Thanks, Rush. Thanks for having me on.

RUSH: Wait a minute now. What did you say? If we had 50 consecutive months, that would mean the number of workers would be shrinking?

CALLER: Well, because you would think there would be a higher demand. So some of those spots would get filled and the number of workers would go down.

RUSH: The unemployed workers, you mean?

CALLER: If the supply goes down, the cost of those workers should go up, correct?

RUSH: Well, supply and demand. Yeah. The more people working, theoretically, yeah. I think. I’m not sure where you’re going.

CALLER: So how can what he say be true?

RUSH: Well, it isn’t true. You’re talking about his combining wanting to raise the minimum wage with supposed job growth?

RUSH: Oh, but as a political point they do. Do you realize how many Americans could, off the top of their heads, explain the theory you just explained? 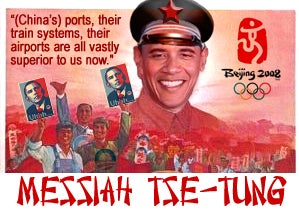 CALLER: Those are union jobs. He would want to increase those.

RUSH: Yeah. And, of course, that’s code to the people that work in unions to know he wants more construction jobs. My point with Obama is the laws of supply and demand don’t matter.

CALLER: No. Is there a full-time job anywhere in America that pays the minimum wage?

RUSH: Uhhhh. (sigh) There may be, but it is not the primary wage supporting the family, if it is.

RUSH: The minimum wage does not and is not intended to support a family.

RUSH: The minimum wage is entry level. That’s why it’s already been destroyed. That’s why it loses jobs. It causes jobs to actually be lost.

CALLER: Maybe that Democratic Congressman from Wisconsin could hire some people at minimum wage to make the KKK hoods for him.

RUSH: (chuckling) I like that. Instead of doing it himself?

RUSH: Spread the wealth. Go out and hire some people to make the KKK hoods to pass out to the Republicans. Don, I appreciate the call. Thank you so much.