RUSH: Well, it is being seen as cool. Now, in order to illustrate this, we need to set something up. There’s a couple things going on here. Do you remember that Beyonce song, the video called Partition, and she sings about going to a club with her husband, but not getting there before things got steamy. Remember that? Yeah, yeah. Well, here is a portion, this is only six seconds. I’m sorry to do these quick sound bites at you. But this is the nub of it. This is the six second excerpt from the song.

BEYONCE: He popped all my buttons and he ripped my blouse. He Monica Lewinsky’d all over my gown.

RUSH ARCHIVE: Yeah, I thought the same thing. When I heard the Beyonce lyric the first time, I said, “What is this Monica Lewinsky’d all over her?”

RUSH: “He Bill Clinton’d all over my gown.”

RUSH: All right. So we made that point. And so yesterday on the syndicated entertainment show, Access Hollywood Live, cohost Kit Hoover and cohost Billy Bush talked about Lewinsky’s article in Vanity Fair.

HOOVER: She’s such a good writer, Monica Lewinsky, in this article, by the way. She goes on to correct one of Beyonce’s lyrics to her song, Partition. In the song Beyonce says “He Monica Lewinsky’d all over my gown,” to which Monica responds, quote, “Thanks, Beyonce, but if we’re verbing, I think you meant ‘Bill Clinton’d all on my gown,’ not ‘Monica Lewinsky’d’.” That’s clever. That’s funny. Even the same way she talked about Hillary in there. She has a great sense of humor. I mean, that’s great.

BUSH: A small but important fact, do we agree on that? All right.

HOOVER: (laughing) Nice to clear up.

RUSH: What a bunch of wizards we have there, don’t we, over at Access Hollywood Live? Man, where would we be, where would our culture be without them to shine the light of truth on all this? But did you hear this? (imitating Hoover) “Oh, Monica, wow, she’s such a good writer.” You see what’s going on here? She’s such a good writer. I mean, if I wanted to, I’d say Monica stole it from me. But I wouldn’t. I don’t want to even think that’s — but it did, I mean, who was the first to point it out publicly? It was I, your beloved host, El Rushbo.

Now, move on to sound bite number six. This is Anna Navarro. She’s on CNN’s Newsroom yesterday, fill-in host Brianna Keilar. Anna Navarro is a Republican strategerist that works at CNN. She goes to the cigar dinner every year. I see her at Marvin Shankin’s Cigar Aficionado Night of the Century Dinner every year for the Prostate Cancer Foundation. So the CNN hostette, Brianna Keilar, said, “Look, so three alleged Clinton conspiracies in the course of a mere month. Let’s talk about Monica Lewinsky. Some say, ‘Hey, this is good for Hillary. It gets the Monica issue well out of the way.’ Others are saying it’s designed to hurt Hillary. But you’re not buying either of those, right?” 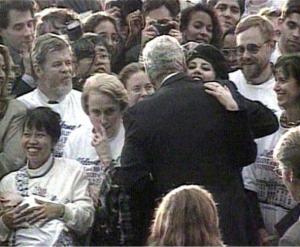 NAVARRO: I don’t think there is any political conspiracy in the works here. Not everything has to be a political conspiracy. I can tell you that I have talked to many Republicans. I was on the Hill today. Nobody is talking about this. Nobody wants to talk about this. This is a no winner. There’s no way to win with this topic in politics. It does not hurt Hillary. You know, they have survived in politics for all this time with this story out there for 15 years. She became a senator after that. And it really is a toxic issue.

RUSH: For the Republicans, don’t even go there, history is what it is. Don’t you Republicans know history? For crying out loud, Lewinsky did what she did, came up with the blue stained dress, Clinton lied to the grand jury, suborned her perjury, and look, they’re bigger than ever. You Republicans, you had better get with it and not bring this up. So you can see what’s in the process of taking place. It’s all, it was cool, it was hip, and if you Republicans try to go there, you’re not gonna be cool and hip and they’re gonna come get you.

RUSH: One more sound bite here. This is from yesterday’s Fox show Outnumbered, and they were having a discussion about Lewinsky’s article in Vanity Fair. By the way, the whole point of praising Monica is to keep her on the reservation. You praise her on the hilt; you keep her on your side. You know, she said that she first brought up the idea…

This is according to the New York Times. She first brought up the idea about writing a piece about her affair with Bill back in 2007. Hmm! I wonder why she thought about doing it in 2007? But that turned out not to work out. Now she finally did it, just as Hillary is getting ready to run again. Do you think Monica might be positioning herself here for a payday, big-time rewards of some kind?

FAULKNER: I don’t often quote Rush Limbaugh, but I’m going to now because he says — and he asked the question — does this actually prove the theory —

FAULKNER: — that Democrats are hypocritical when they talk about a War on Women, when you look at how the 19-year-old at the time was the person attacked.

RUSH: She hates to quote me, but… You know, that’s how you maintain approval Faulkner with your peeps. “Look, I don’t like to quote Limbaugh, but…” Why couldn’t she just say the opinion herself, then, if she agrees? Anyway, she sees the hypocrisy here. What War on Women are the Republicans conducting? When you look at how this woman — 19 or 20 years old, whatever she was at the time — was attacked, even though it was consensual? So there’s that.