Now, look, as much as I’ve talked about it, I know that you’re eager to hear how things went yesterday at the ear clinic with the new cochlear implant on the right side activated. I’m going to tell you everything, but there’s something I gotta deal with first here.

Yesterday I flashed a picture up on the Dittocam of Mrs. Obama looking sad and grim at the same time in the diplomatic reception room at the White House holding up a sign with the hashtag #BringBackOurGirls about this terror group, Procol Harum, uh, Boko Haram. You’re responsible for that, Snerdley. You told me that that’s what it reminded you of. Boko Haram, the Nigerian Al-Qaeda group, kidnapped over 200 girls, and I held that picture up, and I said, “Is this it? Is this how powerless we have become? Is this the extent of our ability to deal with something like this?” 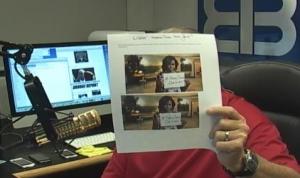 I was aghast. I mean, it’s embarrassing that a Twitter hashtag is all we’ve got. And, in fact, I was further embarrassed that a Twitter hashtag is assumed to be enough because all we have to do is show that we’re concerned. All we have to do is exhibit our proper intentions, and that covers it. We don’t have to actually do anything. It’s perfect liberalism. You don’t solve anything. You don’t do anything. You just show that you care and you have good intentions.

Well, I was raked over the coals for this, as I knew I would be. There were some news stories out there about my insensitivity about this. To me, it is another example of the decline in this country. And then the president of the United States on a campaign fundraising swing basically admitted that he is powerless. He admitted that he has no ability to do anything about this. He said he wakes up thinking of the Nigerian schoolgirls abducted by these Islamist extremists and facing a life as sex slaves. By the way, you want to know the real War on Women, this is it, an Al-Qaeda group kidnapping a bunch of young girls to sell them into slavery. That is your War on Women.

So Obama said that he wakes up thinking of the Nigerian schoolgirls abducted by Islamist extremists and facing a life as sex slaves and wishes he could reach out and save the kids. Oh, what a great guy. Oh, man.

Anyway, back to this Boko Haram thing. I took little grief for pointing out that the extent of US involvement here is a Twitter hashtag. I’m the one that was called insensitive. And the president of the United States admits that he is impotent, he has no ability. All he can do is hope. He sent some hostage negotiators. Oh, and, by the way, John Kerry, who served in Vietnam, is sending some diplomats over there to deal with it. So the State Department’s hit the ground in Nigeria.

Here’s what Obama said yesterday. It was at a press conference. He wakes up thinking of the Nigerian schoolgirls abducted by these Islamist extremists and wishes he could reach out and save those kids. The most powerful man in the world: I wish I could reach out. And people applaud, what a guy. Everybody wishes those kids could be saved. Nothing unique about that emotion. “I have this remarkable title right now, the president of the United States,” Obama said, “And yet every day when I wake up, and I think about young girls in Nigeria or children caught up in the conflict in Syria — when there are times in which I want to reach out and save those kids.”

Now, for the longest time the Regime, both Hillary Clinton and Barack Obama, refused to categorize this Al-Qaeda group as a terror group. And people are asking why, what is the problem? Andy McCarthy weighed in on this and I think this is the absolute best explanation for this. Clinton, Obama, the left all believe in appeasing these people. They all believe in appeasing our enemies, particularly the most violent of them. They believe that if we just show them we’re nonviolent, if we just show them we intend them no harm, if we show them that we understand in ways that they may not think we do, that they will be nicer to us, that they will stop being such bad people, and that at the same time they are promoting peace and stability. And look at Egypt, see how well that’s working.

So the plan is to pretend that terrorists and Islamists are unconnected. You downsize in importance and in reality the terror threat. You appease Islamists with the left’s version of reaching out in a peaceful way to show that we intend no harm. That’s how you are convinced not to put Boko Haram on the terror list, and then you could pretend that the jihadists are not really that important.

“So, yeah, we’re just gonna treat ’em like a criminal gang. We’re not gonna treat ’em like terrorists. Besides, we don’t want to offend Muslims either. There isn’t gonna be a war on Islam on our watch.” It’s embarrassing, folks. It’s just literally embarrassing. If you’ve joined the hashtag, look, I understand the desire to want to be part of a story and to want to show you care.

But in terms of doing anything, that’s the problem. The president of the United States’s wife is out there grimly frowning, holding up the hashtag sign in the White House. What, is Boko Haram supposed to be so frightened by this that they release these girls that, again, they have kidnapped to sell into slavery? Are they supposed to be so frightened they let them go?

Or are they gonna hear the president say, “Gosh, you know, I wake up every morning, and I just wish there was something I could do”? I just think it’s a terrible, terrible illustration/indication of what’s happening to our country, managing a nation in decline. By the way, aside from all that, why isn’t there any outrage over what’s happened here? I mean, here you have a terrorist group kidnapping these African girls.

These would be minorities if they were lived in the United States. Where’s the outrage here? Boko Haram just targets Christians. So you treat ’em like a police matter. I don’t know. I just… It’s embarrassing to me. That’s the only point I wanted to make. Angelina Jolie weighed in on this, too, yesterday. This is last night in London.

JOLIE: These men felt that they can get away with this and they can abuse women in such a way — sell them, rape them, take them as property — because so many people have gotten away with this in the past.

Wow. You know, that’s real “slave blood” we’re talking about here, Snerdley. I’m gonna tell you something. If that’s the case, then the next thing you’re gonna tell me is, “We can’t criticize the leader because he looks like somebody who lives in Chicago. He looks like one of the gang leaders in Chicago.” I mean, do you really think that’s true, that you can’t criticize people ’cause they’re black?

KERRY: Our interagency team is hitting the ground in Nigeria now, and they are gonna be working in concert with President Goodluck Jonathan’s government to do everything that we possibly can to return these girls to their families and their communities. We are also gonna do everything possible to counter the menace from Boko Haram. 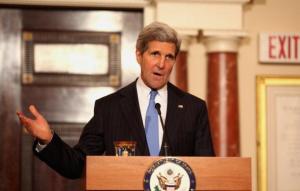 KERRY: — should not only be condemning this outrage —

KERRY: — but should be doing everything possible to help Nigeria in the days ahead.

RUSH: It is. There’s a Twitter hashtag out there. Everybody is condemning it, with the power of a Twitter hashtag. So let’s see, “Our interagency team is hitting the ground in Nigeria,” so a bunch of diplomats are getting off the plane. They’re gonna work “in concert with President Goodluck Jonathan’s government to do everything we possibly can to return these girls.”

What, they don’t even…? (interruption) No. They don’t have recycling. They do not recycle. They are not environmentalists, either. That’s why we should really not like these terrorists. They don’t have a health care plan for the kidnapped girls, and they don’t build schools for anybody. He said it. It’s a joke. This whole Regime is nothing but a joke. Sadly, the joke is being played on us each and every day.

RUSH: Folks, look, I’m not teasing you by delaying the explanation of getting my new implant activated yesterday. You know, I just don’t like making everything about me.

This Boko Haram thing, I mean, I took a little heat for this in the media, the minor places. You might not have seen any about it, but it’s gonna happen.

I’m gonna do the implant explanation right after this break coming up.

It’s one thing for people can’t do anything here to have a Twitter hashtag and join the fray. It’s like placing flowers along the funeral route for Princess Di. I mean, everybody wants to be part of the story. It’s like global warming. Everybody wants to think they’re doing something. But the people that can’t do anything about this getting behind the Twitter hashtag, fine and dandy.

This is a terrorist group that Mrs. Clinton and Barack Obama would not so designate for obvious reasons. You could say, “Well, why doesn’t the Nigerian government go after them?” I don’t know, but I’ll tell you one thing. This Boko Haram had better — with John Kerry pointing out that they don’t offer health care for the girls that they kidnap — open an Obamacare exchange pretty damn quick.

Can you believe that they would actually apply to do that? “We want to open an Obamacare exchange here for our kidnapped girls so that we can get the secretary of state to stop criticizing us. We want to show that we have compassion and that we care about people.”