RUSH: Here are the six points that Dave Brat ran on. By the way, Cantor raised $5.4 million. This guy had $200,000 and spent about half of it. He had a staff of two people, and of course Cantor had, what, 23, a staff of 23. I mean, it was full bore what you would expect. I mean, there’s a lot… (interruption) Well, you could say David-Goliath. I mean, that might be an analogy. It would be. Look, I can’t really add to much of what I said in the first hour, and I said that so well, why even try to say it again.

But this is all bigger than Cantor, and it’s bigger than one issue, immigration reform. This disconnect is major and it is growing. But I think one of the interesting observations to make is here you’ve got a guy, this election was historic. This is the first time a majority leader of a party has lost a primary election, the first time. This is not insignificant. And David Brat is not a wacko. He’s not a kook. He’s an economics professor. He’s an economist. He’s an American. He’s a real guy.

Here are the six points that he ran on. He posted these six points on his website. He mentioned them in his ads, and there weren’t very many ads ’cause a hundred grand doesn’t buy you a whole lot of ads. And Cantor did the typical establishment thing. He’s running negative ads and trying to beat this guy to smithereens and making fun of him, his inexperience, doesn’t know the ways of Washington. He called him a liberal. All backfired.

“That the free enterprise system is the most productive supplier of human needs and economic justice,

“That all individuals are entitled to equal rights, justice, and opportunities and should assume their responsibilities as citizens in a free society,

“That fiscal responsibility and budgetary restraints must be exercised at all levels of government,

“That the Federal Government must preserve individual liberty by observing Constitutional limitations,

“That peace is best preserved through a strong national defense,

“That faith in God, as recognized by our Founding Fathers is essential to the
moral fiber of the Nation.”

It’s clear he’s a lunatic, right? Let me explain something and try to put this in some sort of context. When I was growing up — and this is not old fuddy-duddy stuff. Actually, it’s sort of a historical context here that will illustrate just how dramatically things have changed. If somebody even 30 years ago ran for office on this platform, you know what they would have said? “Okay, big deal. Everybody’ for that. What are you gonna do about X?”

My point is that these six points that he’s posted on his website as his manifesto have become so unusual that they stand out. Thirty years ago it was just assumed that everybody seeking political office believed this. This would not have distinguished anybody. Maybe you’d have to go 40 years ago. I’m not making this up, and I’m not kidding. This would not distinguish anybody not that long ago, because everybody that sought office was assumed to think these things.

Today he posts these six things and they are unusual. They are radical. That’s how far off the track this country has gotten. Let me read these again, and again, keep in mind, nobody’s embracing this. Nobody’s congratulating him. Nobody’s saying, “Yeah, you know what? That’s the ticket.” Nobody is saying, “Yes, if we just get back to that.” Just like the Republican Party is really making no effort to embrace what Scott Walker has done and is doing in Wisconsin, which is another blueprint. That continues to befuddle me, but it’s happening.

“All individuals are entitled to equal rights, justice, and opportunities.” Well, that’s okay, but the controversy comes next. “And should assume their responsibilities as citizens in a free society.” “What right do you have saying what somebody should do? Easy for you to say, assume your responsibilities. You have money. Easy for you to say. You have an education. But what about the single mother, and what about –” whatever concoction the left wants to come up with.

All individuals, yep, are entitled to equal rights, yep, and justice, yep, and opportunities, as long as they come from the Democrat Party. But if, it is said, that you must exercise your own responsibility as a citizen toward a free society, that today has become controversial. Radical.

Dave Brat says fiscal responsibility and budgetary restraints must be exercised at all levels of government. That is considered so trite and so ignorant and so rose-colored glasses and so absent any awareness of the way things really are. That’s just neophyte stuff. This just proves he doesn’t know what he’s talking about. Fiscal responsibility, budgetary restraints, he just doesn’t know how Washington works. He’ll learn, he’ll learn.

The next one. “That the Federal Government must preserve individual liberty by observing Constitutional limitations.” Ah, ah, ah, ah. Today the Constitution is the problem, precisely because it limits the government. The biggest obstacle Barack Obama has is not the Republican Party. It isn’t talk radio. It isn’t anything other than the Constitution. That’s the biggest obstacle in his way. And everything he can do to get around it, he’s doing. And there’s no push-back. 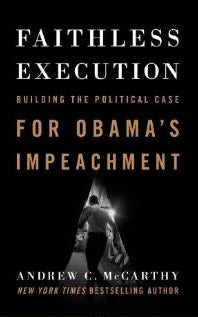 I talked to Andy McCarthy after the program yesterday for the interview in the next Limbaugh Letter about his book on impeachment. It’s so perfectly timed. It could not have come out at a better time. It is so well assembled, so well crafted, Andy McCarthy’s book on impeachment. He makes the point that, hey, the legalities are all there. If you get this to a court of law, which in the constitutional sense is the Senate, just in strict, objective, legal terms, it’s a slam dunk.

The problem is that impeachment makes the Senate the jury. So there’s no way. (interruption) No, you cannot peremptory challenge, get rid of certain senators from the jury. They are the jury. And Andy makes the point that the American people actually need to be the jury. Until the American people are demanding it in a political way, nothing is gonna happen. But the legal case is clear. Obama is clearly impeachable. There have been wanton high crimes and misdemeanors, violations of the Constitution. They’re all over the place, precisely because the Constitution is his biggest obstacle.

Dave Brat says, “The Federal Government must preserve individual liberty by observing Constitutional limitations.” Every one of them swears to do that when they take their oath of office. “Peace is best preserved through a strong national defense.” Oh, no, no, no, no. That’s that Reagan crap again. There we go. And the era of Reagan is over. That’s silly. Peace is best preserved through a strong national defense? No. Doctors, nurses, clean water, Hillary Clinton, the State Department, that’s how you preserve the peace. Negotiating with the enemy. Appeasing the enemy. Apologizing for America. Accepting blame for what’s wrong in the world. That’s how you get peace and preserve it today.

I’m telling you, folks, this six-item list, 30 years ago would have been met with, “Yeah, fine, big deal. Now, what are you gonna do when you get elected?” People would have demanded specifics. Today these six things result in a landslide election victory and have people standing up and cheering. And the fact that the seat of our government finds these six things threatening is all you need to know about why Eric Cantor lost.