Warning: Amnesty is Not Necessarily Dead

Ladies and gentlemen, greetings, and welcome to the EIB Network and the Rush Limbaugh program.

I can honestly say I have never seen such a divide between the people who govern this country and the people who live in it. I have never seen Washington so distant and so removed and so unaware. It is stunning to me to listen to some of the commentary from inside the Beltway. Everybody has their take on what happened with the Eric Cantor and Dave Brat election last night. But I remind you, I went back and looked at some of the transcripts of me on this program in the past months in which I have been predicting a wave election. 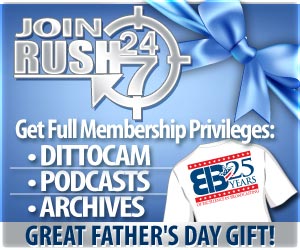 I have been predicting that inside-the-Beltway people have no clue what the people of this country are really thinking. They have no clue how irritated people are. They have no idea how angry, and they don’t care on top of that, even if they were aware. But Washington has less and less about it that relates to normal life in this country than I’ve ever seen. And the commentary in the aftermath of this election last night is evidence of it, and I’ll share some of that with you as the program unfolds.

There was an analyst on Fox News last night. And I still don’t believe I heard this, but I did. I heard it. I looked it up to make sure I heard it right. There was an analyst who may as well write editorials for the Wall Street Journal, who said he was very worried and very upset and very angry and very frustrated. He said the real problem with Eric Cantor losing is that the Republicans have sent a message to the people that they can’t get an immigration bill done. And my eyeballs about bugged out of my head when I heard that. This is a quasi-so-called conservative, slash, mainstream Republican establishment analyst who looks at Eric Cantor and forgot who his constituents are.

You don’t take pictures or have pictures taken of yourself arm-in-arm with Barack Obama when the subject is immigration and expect there to be no kickback or push-back on that. But the tone deafness — and I think the willing disregard for public opinion on any number of issues, is unlike anything I’ve seen. It’s always been somewhat present with the Democrat Party. When this program started in 1988 one of the things happening was the House bank scandal and we’ve been through that. Members of Congress could write themselves checks, whether they had the money in the account to cover it or not. It didn’t matter what they were paid. They were puzzled why their constituents were angry about this. They couldn’t figure it out.

It led to the Republicans taking the House back in 1994. That was one of the first things. The Republicans, however, have always been distant, or not tied to that elitist establishment existence. And I think that’s changed. I think the pressures of that town are such — the libs run it. They run it politically. They run it socially, which is crucial. They run it media-wise. I can give you names of Republicans who cut their teeth working for Bill Bennett and Jack Kemp who now you wouldn’t recognize as conservatives after just a few years in that town.

Eric Cantor forgot who his constituents are. Constituency became the Chamber of Commerce, donors, the Republican leadership, and even the president. All these guys are caught up in this notion that they can’t be confrontational. That that’s gonna kill them. It’s gonna wipe them out. They’ve got to be agreeable. They’ve got to be bipartisan. Well, look where it’s getting them. And, by the way, whoever said that there isn’t any confrontation in politics? Politics is all about confrontation. The tricks that the media and the Democrats have played on Republicans that they fall for continue to amaze me.

I’m gonna tell you something else, too, folks. I’m gonna just fall short of a prediction here, but Snerdley came in today and said, “Well, this kills amnesty. You know that now. They’re never gonna get a bill before August.”

Let me tell you Republicans what you have to lose if you don’t get this right, and that’s the presidency. That’s what you have to lose. Now, maybe they don’t care. Maybe all they want is their Senate committee chairmanships. That seems to be one of the prime motivators. I’m not predicting it, but I’m just gonna tell you that I won’t be surprised if the behind-the-doors attitude is one of disgust and anger at the people of this country and the voters in Cantor’s district and the reaction, “Okay, let’s show ’em what’s what,” and just move this amnesty bill forward.

Right here, ladies and gentlemen, I am holding in my formerly nicotine-stained fingers I opened the program saying don’t you dare think that immigration had anything to do with it. And I’ve got it right here in The Politico. Listen to this. “Immigration Didn’t Doom Eric Cantor.” And you can find this in countless inside-the-Beltway media stories. Here is the relevant paragraph.

Let’s take it piece by piece. “About 72% of registered voters in Cantor’s district polled on Tuesday said they either ‘strongly’ or ‘somewhat’ support immigration reform that would secure the borders…” Does anybody think that’s what’s being discussed now? Does anybody believe that whatever they put together in Washington, whatever they do, is gonna secure the border first?

There’s no way is the point. The Democrats, no way they’re gonna secure the border. The Democrats want as many poorly educated, economically poor, dependent people as they can get. I have never understood why the Republicans don’t get what’s happening to them, but it is clear they don’t. Engaging some of the reaction to Cantor’s defeat, it is stunning. It is literally stunning, what they don’t understand.

Such as: “Oh, the worst thing about Cantor’s defeat — oh, no — is it’s gonna send a message to the country that the Republicans can’t get an immigration bill done.” And that is supposed to lead to Republicans losing elections in droves in November. Does nobody in the Beltway know that nobody in this country wants immigration “reform” the way they’re do? They don’t want it.

We don’t want any part of it. We don’t want to even talk about any part of it the way it’s being discussed. Do they not know this? If they do know it, it’s strictly in our face and screw us. I’m telling you, I have never seen the divide this wide. I have never seen the gap of relatability from Washington to the heartland, flyover country, the rest of the country, as it is today.

They know that the only thing that immigration reform is going to be is a slew of new, poor Democrats that are gonna end up busting the federal budget, electing Democrats in perpetuity, and there isn’t gonna be any border security. There isn’t one person in Washington talking seriously about border security who has advanced an idea that has any workability to it whatsoever. Well, what’s the second aspect of it?

It’s “secure the borders, block employers from hiring those here illegally.” Well, the law already says that. What everybody understands here is that the effort that is immigration reform, comprehensive immigration reform, is to flood the country with cheap labor no matter how you get it. No matter whether the people are legal or illegal. The third aspect of this: “allow undocumented residents without criminal backgrounds to gain legal status.”

There is, at present, no mechanism capable of doing that.

We can’t even prove that four million people have signed up for Obamacare.

We have a government-run website that supposedly is collecting people’s personal information, including credit cards and whatever, and we can’t prove the people who’ve been there have been there, and they want to try to tell us that they’re gonna be able to do criminal background checks on all these people in the shadows, and weed out those who haven’t committed any crimes, and then grant them legal status?

Nor is anybody else.

Now, they bend over backwards to try to convince you, ‘No, it’s not amnesty! Don’t say “amnesty.” Amnesty will kill us. It’s not amnesty. You will hear the sound bites coming up. You will hear further analysis from me. But really, folks, Dave Brat… Here, grab sound bite number 14. Here’s who the guy is. Not one person inside-the-Beltway is embracing his message. Not one is welcoming him to town. Not one.

Now, listen to this, and you tell me what’s wrong with it. 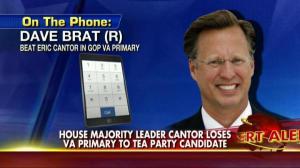 BRAT: Although I got tremendous Tea Party support — and just wonderful people in the Tea Party and the grassroots helped me out, and they’re clearly responsible for the win. But I ran on the Republican principles. We have this Republican creed in Virginia, and the only problem with the Republican principles is no one’s following them. The first one is a commitment to free markets. We don’t have any free markets in this country anymore. Right? And equal treatment under the law, and fiscal responsibility, constitutional adherence, peace through a strong defense, and then faith in God and strong moral fiber. That’s what I ran on: The Republican creed.

RUSH: And not one Republican will embrace it. Well, so far. There may be some who do. I don’t want to issue a blanket statement. But so far nobody’s running out to congratulate him, embrace him. What in the world is wrong, what is frightening, what is threatening about what he said? He’s a free market guy. He wants to repeal Obamacare. He pledged never to raise taxes, stick to a five-year promise not to vote to increase the debt limit. Everything in the world that resulted in people considering themselves members of the Tea Party.

RUSH: Okay, people want to know who did the poll. Public Policy Polling, a liberal Democrat firm, did that poll I just quoted. They did it for some liberal advocacy group by the name of Americans United for Change. They might as well have done it for John Podesta, but it was not Eric Cantor who did the poll. It was Public Policy Polling, the libs. Of course the White House, ladies and gentlemen?

Right here in National Review Online: “A spokesman for President Obama rushed to assure House Republicans that Eric Cantor did not lose because of his gestures toward Democrats on immigration reform.” That just makes me cackle uncontrollably. We are supposed to be reassured? The Republicans… Can you…? It renders me almost… (stuttering) Bruce Babbitt. White House says this, and we go, “Okay. Thanks!”

Look, if they really were serious with securing the border they wouldn’t be dumping all these kids in military bases and bus stations. Some people want to say, “Hey, Rush, you know what? Cantor might have survived if that influx of kids had happened two weeks from now instead of now. He wouldn’t have had the picture.” I don’t know. The bottom line is, they can talk all they want about securing the border.

But not one person with any ability to do anything about it is lifting a finger to do it, because everybody in this country knows full well the Democrat Party wants all those people, and that’s what they don’t understand. Why are the Republicans helping the Democrats essentially gain power forever? People are fed up, totally, with everything coming out of that town, I think.