RUSH: I got a real nice letter from a brand-new subscriber at Rush 24/7. You know, we had a revision to our iOS and Android app this week. You know, that app is great. I don’t spend nearly enough time touting the really great things at RushLimbaugh.com. The books are great, the tea is great, and I spend a lot of time on them. But I’ll tell you, RushLimbaugh.com — which is the granddaddy of all these things — is one of the finest websites for its purpose out there and the value is incalculable.

We have this app, now, both for the Limbaugh Letter and just the Rush Limbaugh Show. The app is called “Rush Limbaugh,” and gives you — if you’re a member — Dittocam access, the free transcripts. It gives you audio and video streaming live or podcast without commercials that you can download and listen to whenever you want. You can access to all of the parodies that we play. It really is awesome.

So we had a new member send a note, because we’ve been touting it this week. “Hi, Rush. I’ve been a faithful listener to your program since 1991 when I was 19. I’m now 41 years old and I’m a Rush Babe. I finally broke down and signed up for Rush 24/7 last Thursday, and it’s the best decision I have made in a very long time. I love being able to listen or watch the Dittocam anytime I have free time.

“I used to plan my workdays — see, I work from home — around your three-hour live radio show. So it’s truly helped me to free up my days (which is getting busier, thankfully) because now I can listen or watch whenever I have time, thanks to your website and your app. Ever loyal dittohead, Katrina from Charleston, South Carolina. P.S. I don’t know if you answer these emails, but it can’t hurt to ask.

“What cigar do you mostly smoke? On the Dittocam, the cigars I’ve seen you puffing on appear to be fatter than a Churchill. I only ask because I do bookkeeping work for a local cigar store and I have learned a lot about cigars, and I indulge in a smoke now and then, a couple times a month. I’m just curious.” Well, La Flor Dominicana Double Ligero Chisel is one, and then I just came across another.

This is what you’ve seen me puffing on recently. Davidoff just came out with some, and the shape is called “Salomones.” The English pronunciation would be “Salomes.” They’re tapered at both ends and they’re quite fat and bulbous at the meat end of the cigar. And I’ll tell you, everybody that comes into the studio here when I happen to be smoking one of them, comments on the sweet aroma and fragrance. 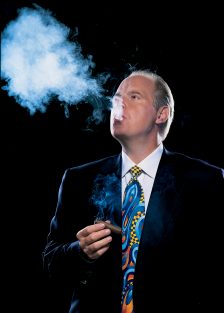 I said, “I can tell you what it is, but when you smoke it you never smell it.” That’s the thing. I love being in a room when somebody is smoking a cigar and I’m not. But when you’re smoking, the sense of taste overwhelms the sense of smell and you can’t smell it. You can’t smell your own cigar at least not as others who are not smoking in the room can.