RUSH: Last night I must admit, and I sometimes worry about this, but I don’t watch cable news much anymore. There are a lot of reasons for it. I remember I used to be habitually — well, not addicted, but I made appointments every Sunday to watch the Sunday morning shows. And after a while I stopped, I lost interest. And the reason I lost interest is I stopped learning things. It didn’t matter who the guests were, what they were going to say was predictable.

So there was no anticipation for what might be said, what might happen, even if there were some scandal going on and some member of the Regime was gonna show up, or even a previous administration, it just lost interest for me. And over time much of cable news has, because it is all so formulaic and predictable. This is not a criticism of it, please don’t misunderstand. That’s not my point here. I don’t watch it and I’m thinking maybe I should take the time as part of the job to watch it, because you probably do. So I ought to be watching some of what you watch, just for the purposes of being able to relate to it, to be empathetic about it.

Now, since I saw it, I have seen and read a lot of commentary from people who also saw it and who think that it was really odd to have the president laughing about something that could be something very serious; he’s being sued. He is being sued for acting outside the Constitution. He’s not doing his job, sits up there and says (imitating Obama), “Hey, they want to sue me? Well, ha-ha-ha.” And while he said he’s being sued and they want to impeach him somebody in the audience started applauding, so Obama stopped and said, “Oh, really? Really? You came in here and you want to join the impeachment?” And he started laughing about it.

The commentary since then has been how unseemly people thought it was for the president not to take this seriously. Here he is, the chief executive, he’s the president of the United States and he is laughing about the things he’s doing, the things he’s being accused of doing and the possibility of being sued, slash, impeached over it. A lot of the commentary I saw was people thinking, “You know, this is really disrespectful. This is very serious stuff, and he’s laughing about it?”

And I have a different take. This is the long lead-up to this. I don’t think he’s laughing at it. I think he is livid and offended and outraged by it and is mocking the people who are critical. That laughter is not laughing at the situation. I think he’s mocking everybody. I think privately he’s just ticked off about this. But I don’t think he’s laughing about it in the sense that he doesn’t take it seriously or that he thinks it’s worthy of jokes. A lot of people think that he’s not taking it seriously, it’s just joking, fun stuff. I don’t read him that way. I think privately he tells you, he will tell you what he thinks. “I’m doing my job. And they want to sue me for doing my job.” That means something.

He thinks he’s totally within his rights to be doing everything that he’s doing, and how dare anyone challenge him. He’s with a bunch of friends and I think he’s just mocking.

CALLER: Thanks for taking my call, Rush. Hey, President Obama’s laughing about this border situation ’cause he’s doing exactly what he said he was gonna do. He’s getting amnesty and he’s going around Congress to do it, and nobody in the Republican Party is pushing back because they’re in on it with him. The RINOs in our leadership are right there with him, so they’re getting what they want without going to Congress. 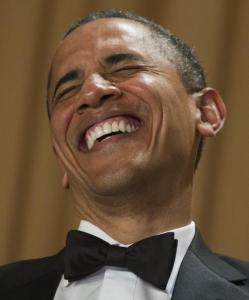 RUSH: Well, two things. If you’re bouncing off my explanation of a few minutes ago, ’cause you said they’re doing it on purpose. I’m not denying that. I was just trying to present an alternative list of motives because there are some people, Dan, no matter what you tell ’em, you could tell ’em and you could prove to ’em what you just said is true, and they’re not gonna believe you, because they refuse to. They just don’t want to believe that their own president, not so much government, the presidency, would sabotage things like the border, no matter what.

So I was simply seeking another way of trying to reach those people. Okay, let’s assume that their motives are been okay and they tried what they really think best, it’s still broken and we’re in really bad shape ’cause they don’t know what to do. The alternative, of course, is that we’re right where they want us to be. They still don’t know what to do to fix this. But your point is, there’s nothing to fix. This is the fix, as far as they’re concerned. This does right the injustice. This does make up for all of these years of America’s brutality in the world, of America’s unfairness and America’s social injustice and America’s mistreatment of minorities and stealing Mexico and stealing the country from the American Indian, the native Indian.

But there’s a certain percentage of people in this country that are never gonna believe it no matter what. You could have a smoking gun memo from Obama and they still wouldn’t believe it, ’cause they don’t want to. But you still have to reach ’em. Now, as to the Republican leadership, I’m not sure that this is what the Republican leadership wants. I know that they are for amnesty. I know that they are for immigration. They’re for doing something that will send the signal to Hispanics that they don’t hate them. That’s their motivation. There’s another motivation, and that’s campaign donations. And the donor class, as popularized by the Chamber of Commerce, is threatening them. “If you don’t do this, you can not expect to receive any more money from us.”

The Chamber of Commerce head, Tom Donohue, said to the Republicans a couple of months ago, “If you don’t do amnesty, you may as well not even nominate a candidate in 2016, ’cause none of us are gonna give any Republican any money if they don’t do this.” The pressure is on. So the Republicans, the leadership, as you say, the RINOs, the establishment, they clearly want massive immigration, comprehensive immigration reform.

I don’t think they’re happy with this, but they’re kinda caught between a rock and a hard place because they haven’t opposed much of this. So to come out now and do so may anger the donor class. They’re kinda caught. I don’t think they’re for the erasure of the border or the blurring of the border, but they clearly want to grant amnesty for the people that are already here. So there’s no question about that, but I think all this is gonna backfire on these people, the Democrats and the Republicans both. The Regime thinks — and I can promise you this — the Regime thinks that this endless influx is going to put pressure on the people of the country and the Republicans to pass an amnesty bill, comprehensive immigration reform.

They don’t like the word “amnesty.” It’s what it’s gonna end up being. They think this is gonna pressure everybody into supporting that, but it isn’t gonna cause that. It’s gonna cause the exact opposite, because everybody with even a smidgen of common sense can ask a very salient question: How does passing amnesty stop this? You mean to tell me that the moment Obama signs amnesty into law, the parents of these kids in El Salvador are gonna stop them from leaving? You trying to tell me the trains are gonna stop dead on the tracks and nobody is gonna be delivered to the Southern border once we get amnesty? There’s not a person in this country that believes that. Well, not a sensible person.

In fact, if we pass comprehensive immigration reform and Obama signs it, there’s gonna be more of this. The DREAM Act is why we’ve got this. A couple of years ago, Obama, with a stroke of his pen, while on his phone, simply altered immigration law, unconstitutionally. He granted amnesty to all illegal aliens under 16 currently in the country. He said, “You can stay.” There’s not a person in the world with a smidgen of common sense that does not think that that is a precursor to what’s happening today. If the president of the United States — and it’s known around the world — has just automatically, with the stroke of his pen, legalized every illegal kid in this country under 16, why, that’s a green light right there on the border: come on in.

And, in fact, this was asked at the White House press briefing just this afternoon. Fox White House correspondent Wendell Goler: “You said that the 2008 law makes it difficult to deal with this problem, but is it not also true that the 2012 DACA executive order contributed to this problem since the child migration doubled that fiscal year and then doubled again the following fiscal year and is on track to double in the current one, maybe either misrepresentation or misunderstanding of the executive order, but certainly it seems to have played a part?” He’s asking the press secretary, didn’t the DREAM Act, didn’t Obama allowing, with a stroke of his pen in 2012, every illegal under the age of 16 to stay, didn’t that lead to what’s happening today?

EARNEST: What’s evident is that this is a problem with a lot of different causes, and that’s why you’re seeing a whole of government approach to dealing with these challenges. That includes everything from trying to deal with this problem at the source through conversations with the leaders of Honduras, El Salvador, and Guatemala, to providing additional resources to law enforcement so that they can better handle the influx of individuals who are being apprehended on the border. There is a lot that this government, that this administration is focused on to address this situation. Again, what we’d really like to see is a similar sense of urgency from Congress. But right now all they’re saying is that they hope to get to this later this month. I guess they’re more focused on lawsuits than on actually trying to solve problems.