RUSH: Pope Francis called for a worldwide ceasefire during yesterday’s World Cup final. Did anybody check? Was there indeed a worldwide ceasefire? Anybody know? I mean, the pope called for it last week. (interruption) It didn’t happen? Ohhh, no, it didn’t happen? The ceasefire didn’t work? “The Vatican on Friday called for a truce in wars around the globe during Sunday’s World Cup final.” They even took to social media. The Vatican got into the hashtag business. It was #pauseforpeace.

In fact, the leader of Boko Haram, in a video, made fun of and mocked the BringBackOurGirls hashtag. Oh, yes, he did. Abubakar Shekau released a new video mocking the social media campaign that highlighted the kidnapping of the schoolgirls taken by his group. We have just a little 16 second excerpt of the sound bite. It’s audio sound bite number 20.

RUSH: Oh, no, my friends, Boko Haram is mocking Twitter, mocking the hashtag. The pope’s hashtag didn’t work. The Boko Haram BringBackOurGirls hashtag hasn’t worked. Is there a hashtag associated with the illegal immigrants that are crossing the border? I don’t know. You gotta hear this again. This is the Boko Haram leader, Abubakar Shekau, making fun of it all. 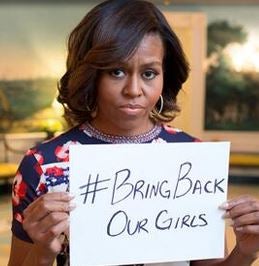 RUSH: Jonathan, of course, the president of Nigeria. Jonathan good dream, what is his name? Jonathan Goodluck? (interruption) It’s Goodluck Jonathan. Can you imagine, what were his parents thinking? I’m not criticizing the name. I’m just wondering, you’re in the hospital, you’ve just given birth and you’re talking with, in this case your husband, about what shall we name our little bundle of joy here. How about Goodluck? Okay, fine, Goodluck is the name and Jonathan is the last name, and there we go. And now he’s being mocked by Boko Haram.

You know, I don’t do hashtags. I wonder what people who do, how they’re going to react to this being made fun of.