I’m saying, “What are they doing? What are the Republicans doing about it?”

I’ll tell you what’s noteworthy about the Republican numbers in this poll. It’s very simple. There are almost as many Republicans as there are Democrats in the poll who disapprove of the way the Republicans are handling this. And if the Republicans in this poll were more supportive, if they were traditionally supportive of their own party, as Democrat respondents are, then we wouldn’t have the disparity that we have. I think that’s somewhat noteworthy because the reason why, it’s real simple. This isn’t gonna get reported, and even when I say it it’s not gonna be accepted by the people that should accept it and face the news and believe it.

The reason this poll looks bad for the Republicans is there isn’t any real opposition to Obama’s immigration agenda. And that’s why the Republicans are upset with their own elected officials, is because they are seen to be on the same page with Obama. There is no opposition. And despite the news we had yesterday, this news has not escaped the little sandbox that it was in yesterday, the fact that immigration reform as a campaign issue has sizzled for the Democrats. I’m sorry to be repetitive, for those of you who were here yesterday but I need to go through this again for people that were not here yesterday who are here today.

I think we were being defrauded by media and Democrats alike trying to create that image that this whole country has always wanted amnesty and massive immigration reform when it never has. There’s never been majority support for that. But it was said that if the Republicans didn’t get on board amnesty, they didn’t have a prayer.

So the Republicans and the Chamber of Commerce, the Republican consultant class, the inside-the-Beltway corporatist class were all signing on. “Gotta do amnesty, gotta do comprehensive immigration reform — and if you don’t, you don’t have a prayer. If you Republicans don’t sign on to this, you’re finished.” The president the Chamber of Commerce told Republicans, “If you don’t sign on to this, you may as well not even nominate a candidate for 2016 ’cause you’re not gonna get any money from us.”

Lo and behold, yesterday we get a story saying the whole issue has “fizzled” for Democrats. How can that happen, if it’s such a slam dunk? If the American people and if all parties involved are so desirous, so seriously intent on getting comprehensive immigration reform, how can it dissipate as a winning issue for the Democrats? Well, it’s because of what’s happening at the border.

It’s because of a massive influx of 300,000 or 340,000 or whatever the number is since April. It’s because what’s happening at the border is providing a little snapshot of what comprehensive immigration reform will mean. Now when polls are taken, “Oh, the Democrats are in trouble if they stand for that.” My point yesterday (well, I’ll repeat it again) is it’s never been the slam-dunk issue for Democrats that we’ve all been told it was. 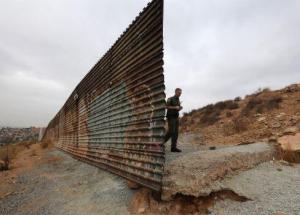 It certainly never has been the only thing Republicans can do to save themselves. It was a trick. If the Republicans had signed on to this and made comprehensive immigration reform happen, that’s when they would never win the White House again. This poll in the ABC News/Washington Post, I think, demonstrates just that.

Because both are saying the same thing: “We need comprehensive immigration reform, and we need it now, and we need it before the November elections.” The Republican leadership is all for it. So how in the world do we get a poll that says there’s massive disapproval of the Republican position, when it’s largely identical to the Democrat position among the leadership?

So there you have it: 66% anti-Republican, 60% anti-Obama. “It’s even worse for the Republicans. Oh, yeah!” And of course the Drive-Bys celebrate and they applaud and they have a party. Now, Noah Rothman who writes about this at Hot Air has a legitimate question: Why did the pollster even think to ask how respondents think or feel about how the Republicans in Congress are handling this? They had nothing to do with it!

Well, you throw this question in there hoping and praying that you can show more unhappiness with the Republicans on this than you can the Democrats. So they got what they wanted, and bingo! There you go. However, if you dig deep, you will find the president’s approach/the president’s behavior on this is in a far worse position with the American public. Throw out the Republicans. It doesn’t matter.

Six out of 10 disapprove of the way Obama is handling this.

If the Republicans had provided some real opposition to this, if they’d been on record opposing comprehensive immigration reform rather than trying to — I don’t know — be like hangers-on on the Democrat Party on this, then they might have a different result of the poll. But it’s all made up. Again, it is a poll being used to make news, to provide the Drive-Bys with a template and a hook for the entire day so that they can shield Obama from what is actually very horrible news for him.

When has he had 60% disapproval on anything? He’s got it in this. But they can bury it with their Republican number at 66%.

RUSH: Ron in Jacksonville, Florida. Great to have you here. Hello, welcome to the EIB Network.

CALLER: I think the deal with the Republicans is basically that they’re not, you know, upset because there’s no comprehensive immigration reform or anything like that. And the numbers that you’re quoting there, I think, look at the fact that people are upset because they’re not shutting it down fast enough.

RUSH: That’s exactly right. That’s exactly why the disapproval for the Republicans in this ABC News/Washington Post poll is so high. Of course the Post is not gonna tell anybody that. The narrative is, the template is, “Yeah, people are unhappy with Obama, but they’re even angrier at the Republicans, ’cause they won’t get on board,” which is a crock. You’re exactly right.

The Republican respondents in this poll are upset with the Republicans because they are not opposing any of this. Again, I hearken back to the news yesterday. Comprehensive immigration reform as an issue has fizzled for the Democrats. Now, why? If it was such a slam dunk — if standing for, if being for, if making happen comprehensive immigration reform were the ticket, if that’s what every politician had to do in order to win — how the hell did it fizzle in just a couple of months? How does that happen?

The only way it can happen is if it were never true in the first place, which is my claim. I don’t believe for a moment that the only way a politician, particularly Republicans, could ever win anything again was to finally come out and be pro-amnesty. That’s just a crock. If it’s that big, if it means that much, if it’s the ticket, it can’t “fizzle.” Yet it did in two months. It’s no longer an advantage for the Democrats.