Your Host’s Take on Johnny Football

RUSH: Here’s Tim in Toledo, Ohio. It’s great to have you, sir. Welcome to the program.

CALLER: Hi, Rush. Thanks for taking my call. Listen, I’ve been a Cleveland Browns fan since I was a teenager and I’m 56 now. I used to have season tickets ’til Modell moved the team. I was just wondering — have been wondering — what your opinion would be if you’d have been an owner or part-owner of the Browns what you might have done with ’em? 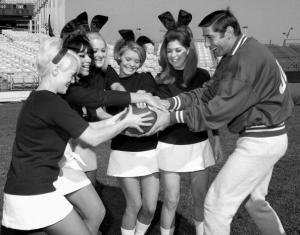 Because if this guy is the quarterback in the NFL that he was at Texas A&M, you’re gonna have a renaissance there. Even if the team doesn’t win right off the bat, given that this is a star-quarterback league, you could build a team around his talents. If this guy pays off, if that draft choice pays off, it could be a turning point for the Browns, I think. But those are big ifs.

CALLER: Yeah, I know they’re big ifs, and I don’t expect them to go to the Super Bowl or anything this coming season. But do you think they should hold onto Josh Gordon and help him out or let him go?

RUSH: Depends. You know, that’s a clubhouse decision. That’s a, “Hey, locker room thing.” If they could hold the team together, I think it might be wise to try to give the guy one more shot to help him out and cut him. You know, everybody needs a second chance, okay. Give him a third chance, but no more than that. But that’s a locker room thing, too.

It depends on what you do with him how that’s gonna impact cohesiveness, chemistry, all that in the locker room. Your focus is Manziel right now. That’s where they roll the dice, and that’s the biggest opportunity you’ve got for a turnaround. (interrupotin) I know not winning, but at least you like going to the stadium to watch. That would be a big step up. That could happen if this it turns out.

Here’s James in East… No, what happened to the guy? Aw! We had a guy up there. What did say he does for a living, did it say or not? (interruption) Okay. He and his wife are polar opposites. He’s a Dittohead. His wife, he actually referred to her as “a low-information Democrat.” His point is that she hated my guts, despised me, and had never listened to me.

He convinced her to listen one day recently and was going to report but he hung up, and I wanted to find out how that went. He said, what, she listened one time? (interruption) He’s been trying for years to get her to listen. (chuckling) She probably happened to tune in one day when I was making fun of contraception and birth control pill prices. That’d be my luck. (chuckling) If she’s an anrdent Democrat and she tunes in that day, there’s no hope.