RUSH: Here’s Lucky, Jacksonville, Florida, as we head back to the phones on the EIB Network. Hi, Lucky. Thank you for waiting. I’m glad that you called. Hi.

CALLER: John Hancock is my name. I meant to call you last week about that newfound period in the Declaration of Independence.

RUSH: Yeah. Isn’t that amazing. The newfound period and the long pause.

CALLER: I’ve been in Jacksonville since ’82 and listened to you for 30 years or more. This is a very conservative, fundamental Tea Party Republican controlled town. I’m an openly out gay man, so I was thrilled with Obamacare, but I’ve lost several friends over this, Rush, ’cause I didn’t buy it.

RUSH: Now, wait. Wait. Lucky, hang on just a second. Why would being openly gay make you thrilled with Obamacare and why would it then cause you to lose friends?

CALLER: Well, I really thought this was gonna be it, and I didn’t realize they had a bigger plan. I figured out now what’s going on. I thought I’d have a hole in my eardrum, and you relate to that ’cause you have the cochlear implant.

CALLER: I’ve been trying for years to get help, and I can’t get the medical care I need. Hillary is coming and she’s gonna win and things are gonna go to universal care, so that’ll be fixed.

RUSH: You still haven’t answered the question. What does being openly gay — what was it about Obamacare that was so hot just because you’re gay? What did Obamacare do for gays?

CALLER: Well, I thought it was gonna help me, but I actually lost friends after they found out I wouldn’t buy Obamacare and they are gay and lesbian friends.

RUSH: Oh, you lost gay and lesbian friends because you don’t support Obamacare?

CALLER: I did not buy it ’cause I know Hillary’s gonna win and then we’re gonna have universal care.

RUSH: Oh. So you’ve just called to taunt me.

CALLER: No, I haven’t, Rush. I’m not gonna taunt you. You are the master.

RUSH: So Hillary’s gonna fix this?

CALLER: Oh, yes. Yes, yes, yes. I know that’s not what you want to hear, it’s gonna be in the museum, but she’s gonna win and things are gonna go so far left we’re not gonna be able to imagine.

RUSH: Have you heard the latest about Bill and his mistress?

RUSH: Richard Johnson at Page Six in the New York Post has quoted a passage and he’s got an advance copy of the latest Ronald Kessler book. It’s called “The First Family Detail: Secret Service Agents Reveal the Hidden Lives of Presidents,” due out August 5th, and Kessler has discovered that Bill Clinton has a mistress that shows up at the family estate in Chappaqua moments after Hillary leaves every time. Her name is the “Energizer.”

CALLER: That proves it. That absolutely proves that straight white males rarely are monogamous. Rarely. Rarely in life are they monogamous.

RUSH: You think that proves it? Clinton proves that straight white males are rarely monogamous?

CALLER: Well, think about Sandusky and all these they catch in the churches and all these sports teams. Yeah, it’s a shame, but I’m glad Hillary’s finally gonna get control. I think up to November —

She’s just apparently go go go go go. I mean, there’s no stopping this babe. She shows up in low-cut tank tops and she bends over for the Secret Service agents so they can get a clear view. The Secret Service detail for Hillary doesn’t like Hillary ’cause she’s mean to ’em. That detail always tells Bill’s detail when she’s on her way back so the “Energizer” can get out of there in time. It’s all coming up. It’s the next Clinton book. August the 5th, the Energizer. 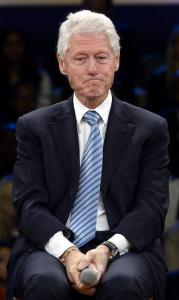 RUSH: I was not making this up. “Bill Clinton reportedly has a buxom blond mistress who visits so often when Hillary Clinton isnÂ’t home in Chappaqua that the former president’s Secret Service detail have given her an unofficial code name: Energizer. This is according to Ronald Kessler in ‘The First Family Detail: Secret Service Agents Reveal the Hidden Lives of Presidents,’ due Aug. 5…

“Kessler is no stranger to the controversies surrounding the Secret Service. He broke the story that Secret Service agents protecting President Obama in Cartagena, Colombia, hired prostitutes,” got drunk, “and put the president in jeopardy.” Richard Johnson here reports he’s seen portions of the book which “says none of the normal protocols is followed when Energizer arrives in her SUV, sometimes just minutes after Hillary has left…

“Kessler quotes a supervisor informing a new agent: ‘You don’t stop her, you donÂ’t approach her, you just let her go in.’ Energizer, who is described as charming and friendly, sometimes brought cookies to the agent… One told Kessler: ‘It was a warm day, and she was wearing a low-cut tank top, and as she leaned over, her breasts were very exposed. They appeared to be very perky and very new and full …

“‘There was no doubt in my mind they were enhanced.’ Kessler also reports that HillaryÂ’s Secret Service detail informs Bill’s Secret Service detail when the former first lady is coming home, so Bill has time to get Energizer off the property and clean up any evidence.” The story is that Hillary “is so nasty to agents and hostile to law enforcement officers and military officers in general,” that her detail helps Bill’s detail with advance warnings of when Hillary is on the way home.

Now, the only thing I question about this is I have been reading recently that Clinton has a bachelor pad. This is in the Ed Klein book, that Clinton’s got a bachelor pad, a penthouse at the Library and Massage Parlor in Little Rock. But I guess Energizer doesn’t live in Little Rock and I guess he doesn’t travel with Energizer. Energizer is, I guess, one of the Westchester babes, and the Library and Massage Parlor penthouse is for the Arkansas women.

Or whoever ends up there.

In fact, in fact, grab audio sound bite number three. We have sound bites about this, in fact. On Fox & Friends today, Elisabeth Hasselbeck spoke with another author, Daniel Halper, about his new book Clinton, Inc. She said, “Some shocking information here backed by a lot of quotes and accounts. Do you think that Bill Clinton really would not want Hillary to win in 2016 if she were to run?”

HALPER: Bill Clinton, of course, has cheated on his wife before, and here’s another case of him cheating on his wife. I think the case in point is 2008 where he had reckless behavior continuously. He had to be advised by aides not to bring his mistress on the campaign trail.

HASSELBECK: There’s been some talk that there is still a mistress in play here. If that were to be the case, how would that affect Hillary’s run in 2016?

HALPER: I’m sure it is, and I’m sure there are more stories and more scandals to emerge. I try to cover as many… When you cover the Clintons, you have to make hard choices about which scandals and which mistresses to cover.

Ah, this is… Do we really want to hand the country over these people again? I think some people would, just for the entertainment value alone. Some people, yeah. It’s round two of the soap opera. Some people are harboring the secret desire that Clinton get caught again just to see what would happen.