See, I Told You So: Obama Has Divided Us

RUSH: President Obama was gonna unify America. Remember? Post-racial, post-partisan, a brand-new president unlike any we’d ever had. All of the old hatreds were going to vanish simply because he’d been elected. He was the first African-American president, the first smart one in a while, the first smart Democrat president. “Here we have this guy who can speak well. He’s very, very, very, very articulate!

“He’s got a great crease in the slacks. He’s just perfect.” The guy won the Nobel prize within two months. It’s kind of like you remember this Ronan Farrow, this 26-year-old that got a show on MSNBC for having done nothing but maybe be Frank Sinatra’s kid. I don’t think he was on the air two days, and they gave him the Walter Cronkite Award for Excellence in Journalism!

Right. Well, where are we? The world is in flames, and Obama doesn’t care, when you get right down to it. Got the Nobel Peace Prize? Just a joke! The traditions, the institutions that used to have real meaning and real inspiration — that used to really mean something — have been corrupted and watered down now to meaninglessness. So the Rasmussen Reports people went out there and did a survey.

The results are: “(67%) of Likely US Voters say America is a more divided nation than it was four years ago. … 35% believe President Obama is to blame. But 34% point the finger at Republicans in Congress instead. Twenty-three percent (23%) say they’re both to blame. … Perhaps problematic for Democrats is that 65% of GOP voters and 55% of voters not affiliated with either major party are more likely to vote this year, compared to 53% of those in [Democrat P]arty.”

Now, that could change as the election gets nearer, but what it means is that a whole lot of Republicans and a whole lot of people that don’t usually vote can’t wait to show up. That does not bode well for the Democrats. “Eighty-three percent (83%) of all voters believe most of their fellow Americans are not informed voters,” meaning 83% of all voters believe that most Americans are low-information.

This proves my point that the low-information voter does not have any idea that he is one.

“Eighty percent of Republicans and 69% of unaffiliated voters think America is a more divided nation than it was four years ago,” and 55% of Democrats agree with that. Only 25% of voters think the country’s headed in the right direction. That’s the lowest finding in months. How did this happen? How did we end up so roiled and partisan and divided? How did it happen? Because remember, Obama was gonna unify. That’s one of his selling points. That’s one of the things he promised. He was gonna bring us all together. The planet was gonna heal. The sea levels were going to recede, and all this wonderful, magnificent stuff. The world was gonna love America again.

And now look, how did all this happen? Well, I want to take you back to me on the day in January of 2009 when I said, “I hope he fails.” Everybody knew what I meant, but they took occasion to misrepresent that and say that I was actually hoping America would fail. It was the exact opposite. I wanted Obama to fail implementing his policies. I wanted his failure to be personal. My thinking was Obama failing means the country remains unharmed. And I have been borne out. He did not fail. He’s been profoundly successful implementing his ideas. I mean, if he doesn’t get what he wants out of Congress, he just writes the law himself.

Well, on that day in January of 2009 I said a lot of things. I said I hope he fails. I said if you think that voting for a black president is going to end racism and convince everybody we’re not a racist country, the slave days are over, you’re dead wrong. The election of the first African-American president is gonna lead to more racial criticism, more charges of racism. It’s gonna create a greater racial divide because presidents get criticized, presidents’ policies are disagreed with. But this time, when anybody disagrees or objects to an Obama policy, it’s gonna be automatically chalked up to racism. We’re gonna move backward on race relations, I said. And I think that’s been borne out. And another thing I said on that day, January 16th, was that we were not gonna end up being more unified. It was going to be the exact opposite. 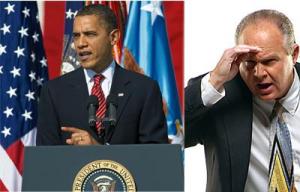 RUSH ARCHIVE: I’m happy to be the last man standing. I’m honored to be the last man standing. Yeah, I’m the true maverick. I can do more than four words. I could say I hope he fails and I could do a brief explanation of why. You know, I want to win. If my party doesn’t, I do. If my party has sacrificed the whole concept of victory, sorry, I’m now the Republican in name only, and they are the sellouts. I’m serious about this. Why in the world, it’s what Ann Coulter was talking about, the tyranny of the majority, all these victims here, we gotta make sure the victims are finally assuaged. Well, the dirty little secret is this isn’t going to assuage anybody’s victim status, and the race industry isn’t going to go away, and the fact that America’s original sin of slavery is going to be absolved, it’s not going to happen. Just isn’t, folks. It’s too big a business for the left to keep all those things alive that divide the people of this country into groups that are against each other. Yes, I’m fired up about this.

RUSH: I said it, January 16th, 2009. There was no interest in solving these divides. There was no interest in ending the racial divide. There’s too much money in it. There’s too much power to be accrued. There’s too much prominence you can achieve by being in charge of the racial divide, or the race business, however you want to put it. But I knew back then that none of what they were telling us that Obama was gonna bring was gonna happen. It was not possible for it to happen because — I know this sounds so pedantic — he’s a liberal. They don’t unify people. They don’t do anything but exacerbate and expand problems. They live off of it. They need victims. They need an underclass. They need dependent, subservient people.