So he decided that he was going to do so. 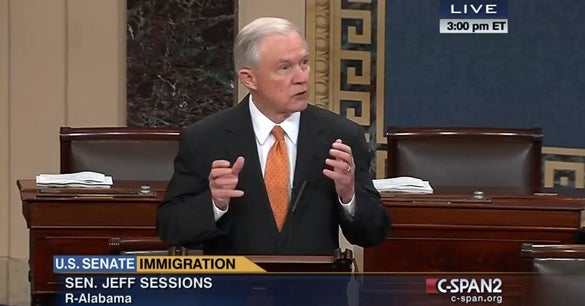 SESSIONS: The president is preparing to assume for himself the absolute power to set immigration law in America. “Well, I’ll just enforce what I wish to enforce.” The absolute power to determine who may enter and who may work, no matter what the law says, by the millions. Our response now is of great import. It will define the scope of executive and congressional powers for years to come.

RUSH: Sessions then said that if Obama is allowed to do this, the moral authority for any border enforcement will forever be eviscerated.

SESSIONS: If President Obama is not stopped in this action and he exceeds his powers by attempting to execute such a massive amnesty contrary to law, the moral authority for any immigration enforcement henceforth will be eviscerated. Anyone the world over will get the message: “Get into America by any method you can, and you will never have to leave.” We’re almost there, but it’s not too late.

RUSH: And then he issued a warning…

SESSIONS: Let me state a warning. The American people are being roused to action — and once activated, their power will be felt. They will not be mocked. They have begged and pleaded for our nation’s immigration laws to be enforced for 30 or 40 years. The politicians have refused, refused, refused. There’s one thing the powers in Washington fear; that is being voted out of office. Before a member of Congress acquiesces to any action of this kind, they should consider their responsibility to their constituents.

RUSH: And then he did something that few in Washington have the courage to do.

SESSIONS: Mr. President, you work for the American people, they don’t work for you, and they will not accept nullification of their law passed by their elected representatives. I’m calling on all members of Congress today to stand up to these lawless actions and sponsor legislation that will block them. I’m calling on every person in this body and in this house and in the House of Representatives to stand and be counted at this perilous hour.

RUSH: Folks, I have to tell you: It’s both appalling and astonishing that it has really come down to this. A United States Senator has to practically beg his fellow congressmen and countrymen to do something to stop these upcoming extra-constitutional executive orders. And he’s right. They will effectively overturn what is left of our immigration law. Now, the Drive-By Media ignored the speech totally.

They don’t want the American public to get riled up and kill amnesty like they’ve done so many other times in the past. But they’re not gonna be able to stop it because Sessions also asked for the phone lines in Washington to be melted. Now, granted, it’s near congressional recess time, and they’re all gonna be leaving town. But not quite yet.

The phones in Washington did indeed melt yesterday, despite the fact the Drive-Bys did not cover this. There’s so much going on that it’s hard for anybody to focus on any one single thing. The chaos, the deterioration, the disasters are numerous. But here you have a United States senator, the only one standing up in opposition to this — the erasure of the Southern border, for all intents and purposes.

When is this gonna stop? With a stroke of his pen he authorizes five or six million with amnesty. Meanwhile, the trains keep coming from Central America, and there’s no end in sight to that. None! And nobody’s talking about ending it. Some are obsessed with immigration reform, comprehensive or otherwise. But, I mean, it’s just astounding. Here’s the story on this from the Associated Press:

“Obama Mulls Large-Scale Move on Immigration.” He’s gonna expand the Deferred Action for Childhood Arrivals to include adults, which we predicted, by the way. That’s what he’s gonna do. It’s been obvious from day one. “You can’t have these kids arriving here unaccompanied! Well, you can’t have them arriving without their parents! At some point, we’re gonna have to track down their parents and bring them here. 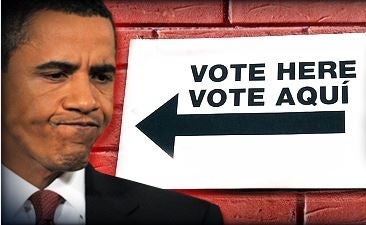 “That’s the only humane thing to do. We must unite these children with their parents.” So we’ll find them and we’ll fly them up here. It’s a Democrat voter-registration effort. It’ll further pressure on the welfare or whatever it is. None of it’s any good. I don’t care how cloaked in compassion you claim to be. We could be as compassionate as you want, but compassion does not require us to commit suicide as a nation.

How many of you remember that we shut down immigration from 1924 or ’25 to 1965? There was none. Zip, zero, nada! Every time I mention that, people are stunned. They think immigration is something that happens all year, every year, throughout the year. From 1925 to 1960, 35 years we suspended legal immigration. You know why? So that the people who came here post-Civil War up to post-World War I could assimilate and become Americans.

They could learn our holidays, learn English, and become part of the American fabric and culture — which, by the way, they wanted to do. That’s not even a component anymore. Talk about assimilation and you get laughed out of the room. “Who are we to make people want to live like us?” Well, it’s our country!

“Well, what gives us the right to tell people they have to live like we do?” That’s the catcall from the left. “These people have their own culture. Why can’t they set it up here? Who are we to tell them how?” That’s the justification for this, and running throughout all of it is: America has been to blame and must pay the price for all of our aggressive transgressions over all of these decades.