You Know What You Need to Fight an Ebola Outbreak? Borders!

RUSH: I have been intending to talk about this Ebola breakout for a couple of days. I did mention it in a passing fashion each of the past two days, but it has now escaped its three origin countries: Guinea, Sierra Leone — and what’s the third one? Nigeria. No. No, no. It’s Sierra Leone, Guinea, and there’s one other tiny little African country. It was the largest outbreak ever, but doctors have come down with the disease and died, doctors wearing full hazmat gear have contracted the disease and died.

There is no cure. It’s fatal in up to 50 to 90% of cases. All the doctors can do is keep you hydrated and give you over-the-counter things for fever and so forth, but what gets you with Ebola is organ destruction and internal bleeding. And the problem with it is the first couple of weeks it’s just like the flu. If you get it, “Ah, jeez, I’ve come down with the flu, oh, my gosh.” Or maybe if you live over in Africa, malaria, but it takes awhile. But I think an American has died who was working over there, who was on his way back to Minnesota. He died before he got here.

Now, the reason I bring this up is it’s another reason to close the border, folks. What has happened in all of these countries — in Nigeria the disease has spread to Lagos, and that’s the bad thing, because Lagos is a city of 21 million, and it’s got lousy health care. There are no quarantine services. It got into that major metropolis. It’s spread by bodily fluids. I mean, this disease can find you. If it can penetrate hazmat gear worn by trained doctors who are specifically treating this disease, you know it is not hard to contract. And these countries, these three origin countries, the worst outbreak maybe ever. If not ever, it’s the worst outbreak in a long time.

The only way you can control this is to quarantine the people who come down with it. It’s the only thing you can do. There is no treatment for it. So you have to stop the spread, which means you have to shut down airports. You cannot let people leave, and this is what some of these original three African countries did. Somebody got on an airplane to Lagos, Nigeria, and that’s all it has taken. Now everybody is worried that this the thing could become global. Who knows. I’m not trying to create a panic here, but one of the ways that you deal with this is to close your border in and out. If you are a country, if you’re an origin country, the only way to contain this is to contain it. The only way to treat it is to contain it.

In the good old days — and it’s not that long ago — a threat like this would be met by a nation closing its borders and ports of entry to the countries where the disease is running rampant. Not everybody, just to the countries where the disease is running rampant. Now, we would never do that of course. That would be unfair, that would be discriminatory, that would be mean. The way it’s looked at by many in our country, it’s not fair that they get Ebola and we don’t. Whoa, whoa, that’s not fair. And people do have that attitude about it. I’ve talked to people, “What is it about Africa? Why does all of this happen in Africa? It isn’t fair.”

What, you want it to happen in more places? 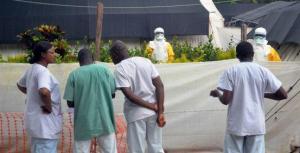 “Well, it does seem like it’s sorta unfair to Africa.” As though the disease is picking. It’s spread by the fruit bat. Do you have any fruit bats on your farm? That’s one of the carriers of Ebola. At any rate, keep a sharp eye on this, folks. Stay tuned to it. There’s gonna be a lot of panic reporting, because that sells media, it gets clicks on the Internet, sells newspapers, ratings on TV or what have you.

“Since it claimed its first victims in Guinea last March, the Ebola virus epidemic has killed 660 people in three countries and infected nearly 1,100 — more lethal than any other outbreak in the virusÂ’s nearly 40-year history.” Ebola was only discovered 1976, by the way. “Last weekÂ’s developments could transform this outbreak from an unusually nasty regional epidemic to something much bigger. On Jul. 24, Nigerian authorities confirmed that a Liberian man, Patrick Sawyer” — that’s the man who was on his way to America “– had collapsed in Lagos after flying there from the Liberian capital, Monrovia, and tested positive for Ebola.” Sawyer died before he got on the airplane to come to America.

So the three countries are Guinea, Sierra Leone, and Liberia, they’re rural West African countries. But Lagos is different. Lagos is Africa’s biggest city. There are 21 million people. It is also one of the most densely populated. The number of people per square mile is incredible. It’s something like 53,000 people per square mile. That’s the population density. That’s bigger than New York. So the disease has spread there, and doctors, as I say, have gotten the disease and died from it wearing full hazmat gear, like three doctors now, I think. At least two.

So this kind of thing would be used, you know, at borders, you would want to keep people from these countries out of your country. Not to discriminate against them, but to protect your own population. That is the way it is dealt with. There’s no cure. There’s no treatment. There’s no nothing for this.