Republicans Scream, “We ARE NOT Going to Impeach Obama!” — and Obama Screams Back, “Stop Hatin’ All the Time!”

RUSH: Okay. Okay. So you want proof. You want proof that the Republicans aren’t going to get any credit for trying to pass an immigration bill with the Hispanics. Even though it fails, even though it has no prayer, they’re going to do it anyway to get credit for it to show the Hispanics they love them and the Republican Party is a great home for them.

“We are not going to impeach Obama! Please do not hate us!”

“Republicans plan on impeaching Obama. Strategy sessions at work how to do it.”

Then Obama goes to Kansas City after visiting Arthur Bryant, which is what every Democrat president does. Every Democrat president goes to Arthur Bryant. It’s a barbecue joint. Gotta go in there. It’s rote. Kansas City, it’s one of the things you do. And he did. Then he goes up and he says (doing Obama impression), “Just gotta stop the hatin’.” The President of the United States. There’s a “G” in that word. If you’re going to use it, say, “Stop the hating.” (doing Obama impression), “They gotta just stop the hatin’. Come on now, let’s get together, let’s stop the hatin’.” And of course who does that appeal to? The low-information crowd. They think it’s cool and hip.

Let me ask you, was it an act of love when the president turned the IRS loose on the Tea Party? Have you seen Catherine Engelbrecht? She’s one of the most attractive, nicest, sweetest people on TV. She’s got this Tea Party group. She wanted to start it. She wanted to raise money. The IRS targeted her, made her out to be some sort of a criminal. You want to talk about stop the hatin’? Was it an act of love when the president repeatedly lied to the very people sitting behind him in Kansas City yesterday. (imitating Obama) “Hey, you like your doctor? That’s great. You can keep your doctor. You like your insurance plan? All right, if you like it you get to keep it.” Twenty-five different times, over three years, he personally lied to the same people sitting behind him. Was that an act of love? We just gotta stop the hatin’. Hey, they should stop the hatin’.

Was it an act of love when the president opened the southern border for the purpose of letting in tens of thousands of illegals with criminal records and no skills and then dumped them in states without informing the governors? Was that an act of the president loving anybody but the illegals? The president’s campaign called Mitt Romney a tax cheat and a murderer. Was that an act of love? Or was there maybe some hate behind that? I don’t know about you, I’m not in any mood to listen to some lawless angry guy do shtick about hate while he’s dismantling the country.

RUSH: I tell you, folks, keep a sharp eye on the president talking about hate. Because it’s all part of his and Holder’s efforts to criminalize any criticism of Obama or any hate speech that might be considered criticism. Make no mistake about that.

RUSH: I want to play this. It was from yesterday. I told the broadcast engineer we’re going to do one, two, three and 19. So what do I do? I tell him to grab 20. But it’s Obama. It’s yesterday afternoon in Kansas City standing in front of a bunch of people who still love the guy, think he’s the greatest thing, probably voted for him.

He told them that they could keep their doctor, keep their insurance plan. He lied to them 25 times about that. He lied to them about their premiums coming down $2,500 a month. Turned the IRS loose on hundreds of conservatives. Has opened the southern border. Is out apologizing for America. He’s out there saying Republicans have got to stop all the hate. 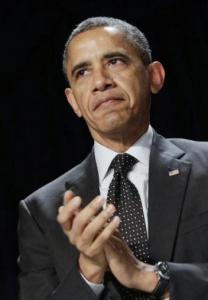 He’s just goading them, folks. He’s just goading these Republicans to give him what he wants, and what he wants is to be impeached and the Republicans are shouting from the rooftops that they’re not going to impeach him. I think they’ve gone so far overboard, they’ve gone way beyond what’s necessary. I really hate this. Two things: This business of shouting: “We’re not going to impeach the president!” Look, don’t take it off the table.

In any negotiation, you don’t throw away your options. All you’re doing is signaling to the president that you’re not going to do anything to stop him and you’re signaling to the people that whatever he’s doing, “Hey, folks, he’s not breaking the law. He’s not being lawless. He’s not out there being extra constitutional. If he were, we would do something about it. But we’re not going to do anything about it.” What’s the message that they’re sending?

Then they said, one of them said, I think it was Steve Scalise, I’m not sure, maybe more than one, in an interview — yeah, it was Sunday on Fox News Sunday and whoever Chris Wallace was interviewing asked: “Will there be a government shutdown?”

“So you’re saying that there won’t be a government shutdown?”

“Please, listen, we will not be the ones to shut the government and take away your freebies.”

There’s panic. Well, in doing that, they are saying that they’re going to do nothing with their power of the purse is the cliche to rein in Obama’s extra constitutional activities. Why would you throw away your weapons? To get re-elected so people will love you, so they will not blame you for what’s going on? I’m telling you, you go out, you spend your life trying to prove negatives, spend your life trying to convince people that you’re not going to do what’s going to cause the upcoming disaster, rather than trying to stop the disaster. There is such a glorious win opportunity here.

There are specifics to high crimes and misdemeanors, and Obama has engaged in them. Let me find this. We had an amazing AP story today that contrasts Obama’s claim of a roaring economic recovery with actual interviews of American people saying their lives are turning to horse manure. I mean, that’s the kind of stuff you get with Republican presidents. But the AP did it, an actual story, the thrust of which is: There isn’t any real economic recovery that average Americans are experiencing.