And yet, if you turn on the television, what you will see is Republicans want to impeach Obama. And if you listen to the president you’ll hear him say (imitating Obama), “They keep suing me. You know what, they gotta stop the hatin’. Why won’t they work with me instead of trying to impeach me?” The president wants to be impeached. He believes it’s a political winner for him. The Democrats obviously do because they’re the ones talking about it. The Democrats are talking about impeachment much, much more than the Republicans are. And you know who has established that to be true? None other than a quasi God to Democrats and leftists. That’s our good old buddy, Nate Silver.

Nate Silver took his statistical analyst talents to ESPN. That’s where his FiveThirtyEight blog is now. He has run the numbers and he has concluded that, on the whole, the Democrats are spending a lot more time talking about impeachment than Republicans are. “Consider, for example, the Sunlight FoundationÂ’s Capitol Words database, which tracks words spoken in the House and Senate. So far in July, there have been 10 mentions of the term ‘impeachment’ in Congress and four others of the term ‘impeach.’ Eleven of the 14 mentions have been made by Democratic rather than Republican members of Congress, however.”

On Cable news. “The scoreboard so far in July: Fox News has 95 mentions of impeachment, and MSNBC 448.” MSNBC is the impeachment network. “That works out to about 2.7 mentions per hour of original programming on MSNBC, or once every 22 minutes. MSNBC hasnÂ’t become quite as obsessed with impeachment as CNN was with Malaysia Airlines Flight 370, but it may be getting there. Impeachment mentions on MSNBC increased sixfold from May to July. Overall, since Jan. 1, MSNBC has mentioned impeachment 905 times to Fox NewsÂ’s 213.”

But that doesn’t quite tell the whole tale because most of the 213 times on Fox have been denials. Most of the mentions on MSNBC are presented as they really want to; they are thinking about it; they might actually do it; they’re really getting close to doing it; they really want to do it.

“Some of the impeachment discussion from Democratic politicians and liberal commentators has a kind of a BrÂ’er Rabbit quality. ‘Only please, BrÂ’er Republicans, donÂ’t impeach President Obama!'” As they beg him to quite do that. In case there’s still any doubt as to who is driving this impeachment nonsense, it is the Democrats. And with that let’s go to the audio sound bites. We will start with Nancy Pelosi on the House floor.

PELOSI: If you don’t want to hear people that use the word impeachment, as your people have done, then tell them impeachment is off the table. That’s what I had to do. That’s what this Speaker should do.

RUSH: He already had. Boehner had already said impeachment is off the table. Every Republican in Congress said it’s off the table, and yet Pelosi goes to the floor of the House and says, “That’s what I had to do.” Except she didn’t. They did impeach Bush. I asked Snerdley yesterday, “You remember that, right?” And he didn’t until his jogged memory actually got into gear. It’s that distant a memory, but the Democrats did impeach George W. Bush. They never got to the trial. But they did impeach him. Boehner has already said impeachment’s off the table, and it didn’t work, did it? Look at all the mentions on PMSNBC and CNN and on the House floor by the Democrats. “We are not going to impeach Obama,” is being drowned out by all the talk from the Democrats that the Republicans want to impeach Obama.

LEE: President Bush pushed this nation into a war. It had little to do with apprehending terrorists. We did not seek an impeachment of President Bush because as an executive he had his authority. President Obama has the authority.

KUCINICH: I rise to a question of the privileges of the House and offer the impeachment resolution noticed last evening.

CLERK: Resolved that President George W. Bush be impeached for high crimes and misdemeanors and that the following articles of impeachment be sent to the United States Senate.

RUSH: They did it. They are denying they did it. Sheila Jackson Lee was a co-sponsor of Kucinich’s articles of impeachment and just yesterday, grab sound bite number two again, I want you to hear it again. You just heard Kucinich make sure everybody knew that his articles of impeachment had been exhibited to the Senate. They were submitted, sent to the Senate. Sheila Jackson Lee co-sponsored those articles just six years ago.

LEE: President Bush pushed this nation into a war. It had little to do with apprehending terrorists. We did not seek an impeachment of President Bush because as an executive he had his authority. President Obama has the authority.

RUSH: She obviously forgot, which is entirely possible. It could be a legitimate excuse with her. She could just have forgotten. Remember, she thinks there are flags placed by astronauts on Mars. Back to Pelosi, Nancy Pelosi, this is this morning on Capitol Hill at her weekly press briefing. A reporter said: “You mentioned in your opening remarks, madam, that the leadership,” meaning the Republican leadership, “should take impeachment off the table, but aren’t the Democrats guilty of the same base rallying politics that you’re accusing Republicans of doing?”

REPORTER: You’re raising money off of this talk when the speaker continues to say — 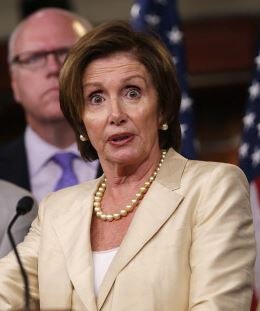 PELOSI: I want to tell you something. That money coming in is practically spontaneous. People are very upset. I’m sorry to interrupt you, but every stipulation you’re making I don’t agree to. The fact is why do you create a lawsuit? Because you want to find somebody culpable of something. So if that’s not their point and it has not a path to impeachment, all they have to do to say to their people and to ours, because they’ve activated our base, all they have to do is say to their people, “It’s off the table.” I had to say that with a great deal of courage, I might add, about the war in Iraq.

RUSH: But she didn’t! She was right there with Kucinich and his articles of impeachment. She didn’t say “no” to it, and so it didn’t take “a great deal of courage” for her to say no to impeaching Bush because she didn’t. So now she accuses the Republicans of fundraising and once again demands to take it off the table, and they already had. That’s how this works.

They had already taken it off the table. This is no different than Republicans want to starve kids, back in 1995. John Lewis — a great, great lion of the civil rights movement — also yesterday on the House floor, in Washington, got all fired up here. He’s just ready to roll, and his point here was that the Republicans have never, ever supported this president.

LEWIS: House Republicans spend all of their time and energies fighting this president. Why? From his first day in office, the Republicans in the House, in this House, has (sic) never supported this president. Every olive branch he extended was broken! But today, Mr. Speaker, we have reached a low, a very low point. This resolution to sue the president just goes a little too far. It is a shaaaame and a disgrace that we are here debating the suing of the president. The American people deserve better. We can do better! We can do much better!

RUSH: Yeah, we can do better. This is the same guy said, “They’re coming for our children!” They’re coming for our whatever. Remember that? He was talking about the school lunch program. The Republicans were going to starve kids. We can do so much better, Congressman Lewis. Here is Debbie “Blabbermouth” Schultz, who still runs the Democrat Party, also yesterday on the House floor.

BLABBERMOUTH: It’s unconscionable that when the do-nothing Republican Congress finally decided to do something (snickers), it’s suing the president for doing his job when they refuse to do theirs! I wish I could say that this was politics at its worst, but I’ve heard too many in the Republican majority raise the specter of impeachment not to know better. I urge opposition to this time- and taxpayer-wasting resolution and urge Republicans in the majority to join Democrats and address the serious challenges facing our nation.