How This Third-Grade Teacher Incorporated Rush Revere into Her Class

RUSH: Here’s Ivy, as we hit the phones in Summerville, South Carolina. Hi, Ivy. Great to have you. Hi.

CALLER: Hi, Rush. Thanks so much for taking my call. My husband and I are huge fans of yours. I wanted to let you know that I’m a third-grade teacher, and this year my husband said, “Well Rush has written a book.” And I said, “Well, that’s great.” So he goes out and gets it and he started telling me about it, and I said, “What are you talking about, a talking horse, time travel, what is this about?” And then he explained to me that it was a children’s book. So I read it, of course, in one afternoon, and I said, “Okay, how am I gonna incorporate this book into the classroom,” because the kids need to hear it. They need to read this book. Well, the dilemma is that we don’t teach the Pilgrims in the third grade.

So what I decided to do was to use your author’s note that explains the principles of the founders in our country as a way to introduce the Civil War. And then from there, I decided, well, I’m gonna go ahead and I’m gonna read a little bit of this book ’cause I need these kids to get excited about it. Even if I can’t finish it, I’ll give a book talk and then they can go out to the library and get it, and so forth. So I start reading the book, and as soon as they meet Liberty, that was it, the giggles, delights, you know, just absolutely they were thrilled with it. So every day, they would beg me, “Are you gonna read more of that book? Are you gonna read more of that book?” And while this was going on, a glorious thing happened. You wrote the second one, and we absolutely teach the American Revolution in third grade, and so that was a no-brainer for me, so I used your second book as a way of —

RUSH: Ivy, you have made my day, but don’t stop. Can you hang on?

RUSH: All right, great. This is making my day. This is unbelievable.

RUSH: Okay. Finally we’re back so I can continue the conversation with the schoolteacher, Ivy, in Summerville, South Carolina. I thought I had more time. I misread the clock by one minute when I took her call and I’ve been sitting here fretting that I screwed up. Anyway, so she’s back. And Ivy, really, I thank you for holding on and continuing with me here, ’cause I know you probably have to be busy. Wait. You’re still there, right. Testing one, two, three.

She’s not there. Is she there? She hung up? I guess she’s gone. Oh, what a sad thing. Well, did you get her phone number, can you call her back? We’re trying to do that. I was afraid this was gonna happen. To pick up, in case we don’t get her back, what she said was, she teaches third grade, and third grade, they don’t teach the Pilgrims. That’s been done by the time the kids get to third grade. So her husband had gone out and bought the copy of Rush Revere and the Brave Pilgrims: Time-Travel Adventures with Exceptional Americans. He came back, read it, told her about it, and that’s when she said, “Well, can’t teach the Pilgrims, third grade.”

We’ve got her back. Okay, now, that was the author’s note. We got Ivy back in Summerville, South Carolina. So, you made my day. I’m so glad we were able to reconnect with you. I can’t tell you how depressed I was when I went to say hello and you were not there.

CALLER: Thank you so much.

RUSH: Anyway, so the author’s note, that’s what you found, and that was the bridge. That’s what enabled you to mention the book to your students? 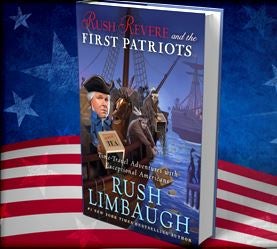 CALLER: That’s correct, yes, sir, uh-huh. I used that as a way to introduce the Civil War, you know, because we were about to enter a discussion on the time when slavery existed in our country, but because of what you said in the book and the way that you explained the Founders’ passion for our country, it was because of that that slavery inevitably was abolished. So I felt like that would be a good way to get some conversation going.

RUSH: If I might add, that is brilliant on your part as a way of dealing with slavery with third graders.

RUSH: That really is. It happens to be true, is why it’s brilliant, and they’re old enough to understand that.

RUSH: Well this is just great. You couldn’t do the Pilgrims, but you used the author’s note to get into the Civil War, and then right as we ran out of time you talked about discovering the second book.

CALLER: That’s correct. Yes. The First Patriots. I was able to read that book as a way to review the Revolutionary War and the events that led up to the war, because that’s absolutely one of the things that we teach in the third grade. So they were thrilled with that, absolutely thrilled with it, and several were quite unhappy that I was unable to finish the Pilgrims. One particular little girl was quite devastated by that, so I bought her a copy of the book and gave it to her on the last day of school so that she could finish it.

CALLER: Rush, thanks so much for writing these books. They’re incredible. I’m telling you, I think that there need to be teachers guides that go with the books. I think teachers need to have classroom sets of these books. I used to teach language arts, sixth and seventh grade, and if I was still doing that, I would absolutely have classroom sets of these books as a way to teach language arts across curricula through history. You’re just doing a wonderful thing for our kids and I thank you for that.

RUSH: Well, I don’t know what to say. I thought you made my day 15 minutes ago, but here you’ve done it again. I don’t know how to thank you. I really don’t. If school were sill in session I would send you enough copies of the book for you to give everybody in the class.

RUSH: And I still might. In fact, when we finish I want you to give Mr. Snerdley a way, an address or something. I do want to ship you some things, and there’s some things coming that I can’t really talk about that you might find useful. Are you gonna be teaching next year as well?

RUSH: Well, thank you. But the kids, once you get to reading Liberty, the talking horse, that’s what got ’em?

RUSH: And they wanted to hear more and more. That’s just… I can’t tell you ’cause —

RUSH: Well, you see, there’s a mission to these books, and you have just explained to me how it’s working in your case, and I can’t thank you enough for this. You’re making my day. I’m not just doing this for the sake of doing it. There is a specific mission, and, you know, trying to write books that will be liked and enjoyed by 10- to 13-year-olds, your age-group, that’s something I’ve never done before. And that was part of the challenge, too, so you’re hitting home runs for me all over the place here.

CALLER: Well, thank you, and you’re doing a great service for our children.

RUSH: Well, it’s a labor of love. I tell people, “I love the country; I wish everybody did. I know everybody doesn’t. I wish everybody did.” As these kids get older they’re going to learn more and get into more intricate explanations of the historical events they’re able to absorb in these books, but this is a foundation hopefully that will stay with them through all of the other things they learned and are told, which is also part of the mission.

But having a teacher like you that’s behind it and giving it credibility, why, that’s just tremendous. So if you will hang on, Mr. Snerdley will get an address from you where we can ship you quite a few things down the road. As I say, I wish your class was still in session ’cause I would send you a copy for everybody. By the way, how big was your class that you taught last year?

CALLER: I teach two classes, actually, but I have 25 in each class. So to get classroom sets I was talking about, that would be 25.

RUSH: Twenty-five. Okay, cool. That helps. Thank you ever so much.

RUSH: No, my pleasure. By the way, some of the things that you mentioned as there need to be… I can’t go too far here, but “you might be on to something there,” is as much as I feel comfortable saying.

CALLER: Well, I sure hope so.

RUSH: Get the book in the hands of people like you and it just can’t lose. So I appreciate it. That’s Ivy from Summerville, South Carolina, and Rush Revere and the Brave Pilgrims: Time-Travel Adventures with Exceptional Americans. The second book… They’re both on the New York Times best-seller list, top 10. The first one has been out for 40 weeks now. So it’s amazingly gratifying.

Rush Revere and the First Patriots is the second book, and that’s by no means all. Hee-hee-hee-hee-hee-hee. But that’s as much as I can say at the moment. But thank you so much again, Ivy. Speaking of slavery, this another thing. I made a point yesterday that I think has been illustrated in a news story today. So let me take advantage of her bringing that up and do that next when we get back.