Mass Hysteria — Or No Reason to Panic?

RUSH: So we got a poll. We have a new poll out there. The NBC News/Wall Street Journal poll. It shows Obama at record lows in this poll, and NBC is ignoring it. They’re ignoring their own poll. I mean, they’re talking about it, but they’re not talking about the stuff that damages Obama. It really is amazing to watch how our country is just being taken over. I don’t know if it’s just rampant ignorance or abject stupidity, maybe combination of the two, but it is stunning to watch and record every day how low-information seems to be spreading. 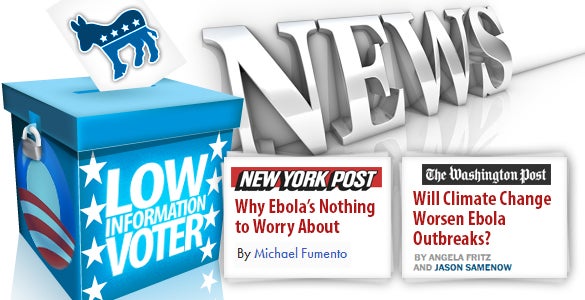 Let me give you an example before I get to the NBC poll. There are three stories yesterday, today, maybe all three today, not sure which. Now, as any informed person — and I don’t mean biased, I just mean any honest, objective, informed person knows, whether you believe in global warming or not, there hasn’t been any warming since, what, the last 16 years, 17 years. Almost 17 and a half years there has not been any warming, according to NASA, according to official temperature takers, according to many people who buy into and believe the crisis of man-made global warming.

They all admit there hasn’t been any. They’ve had to come up with explanations and excuses, why, it’s just on hiatus, temporary things like Sahara desert dust or volcanoes or something. Something is a temporary interruption in what everybody knows is global warming, except there isn’t any and there hasn’t been any for 17 years, 17 and a half years now. Nevertheless, Washington Post has a story today: “Will Climate Change Worsen Ebola Outbreaks?”

There’s a theme here, and that is you take a fear — right now the fear is Ebola. Whether it’s a legitimate fear or not, there are people that fear the massive spread of the Ebola virus into places, such as the United States, outside the three nations in Africa where it’s really raising hell. So you’ve got this fear. And, by the way, in the New York Post today there’s a piece by the well-known author Michael Fumento, who is a self-described expert in mass hysteria. At the end of the piece, that’s how he describes himself. There are two other descriptions, and one of them, “an expert in mass hysteria.”

And his point is, there’s no way that Ebola’s gonna come to the US. We couldn’t get it here if we wanted it here. We couldn’t cause an outbreak if we wanted. It’s just too hard to spread. Don’t worry about it. It is an abject fear people are raising but it isn’t gonna happen, and he’s hell-bent on convincing people there’s nothing to worry about here. I’ll get to the details in a minute. I’m just setting this up. He says don’t worry about it, it’s much ado about nothing.

He says more people are dying from tuberculosis every day in Africa than from Ebola. You just don’t hear about it. He says if it’s that bad, why has it only killed a thousand people in three countries. How come it hasn’t spread beyond these three countries? It’s been around for six months and if it’s so deadly, how come it’s still primarily contained in three poor countries in Africa? These are the kinds of things he’s saying.

“California Governor Jerry Brown: Climate Change Will Drive Millions of People North Over the Border.” Have you heard this? I think this is from last week. Moonbeam thinks that climate change is gonna cause people to flee in even greater numbers to the US. You know why? Well, it’s gonna be getting warmer here, but it’s gonna be a sweat box in Mexico, and El Salvador, and Ecuador and Guatemala. You go further, you get closer to the equator, it’s gonna be a sauna. And so to cool off, the immigrants are gonna have another reason to flee north. Not just to get to the United States for prosperity or the safety net or what have you, but to escape the sauna.

And then the third headline, the guy that cofounded the Weather Underground website, which a lot of people like, “Climate Change May Increase the Number of Hawaiian Hurricanes.” So they get you two hurricanes on track to skirt by Hawaii. It’s not all that common for hurricanes to hit Hawaii. They have. But it’s not common. Remember when Katrina hit, the Drive-Bys, every June 1st would go to every beach they could find and look out over the Atlantic Ocean hoping to see the next Katrina coming. The first day of hurricane season they just wanted to trumpet this crisis, horror-related news.

Jon Sanders writing at the Locke Foundation has a piece on this today and the concept behind this, the purpose the left hopes to achieve or the objective they hope to achieve. It’s constantly keeping people frightened, constantly promoting these issues, which there isn’t any global warming. There isn’t any. And the only thing that helps the issue survive is just low-information voters who don’t know diddly-squat, who think they do, though. They buy into it. Climate change is happening, even though there is record cold weather all over this country this summer.

Now, I expect some say, “Mr. Limbaugh, you must understand: Weather is not climate.” Oh, really? Then how come every time there’s a heat wave in January, you guys start talking about climate change? Is that not weather? Don’t give me that. So it’s just, to me… It fascinates me and frustrates me. I can’t tell you how it does. You know, being surrounded by fools is one of the most irritating things for me. Having my intelligence insulted, it’s like fingernails on a chalkboard.

Being surrounded by idiots and fools, that’s the same thing, and it seems like we’re surrounded by more and more of ’em each and every day. My brother made a point to me the other day. He said, “You know, whenever Obama…” It just seems this way. “Whenever Obama makes an argument about something, it’s just automatically assumed to be true, without even proving it. He’ll just say it and everybody just tends to believe it.”

So how do we deal with that? Where do we go from that? It’s the same thing here. There’s a phony baloney, plastic banana, good-time rock ‘n’ roller headlines about global warming, and you wonder how many people buy into it.