RUSH: The first African-American president in history. This is why he was elected! Grab the audio sound bites.

Let me prove this to you. It’s not just me saying it. This is Spike Lee, sound bites two and four. Last night Spike Lee, Anderson Cooper 95, and Cooper said, “Look, a study came out yesterday,” Spike, old buddy, old pal, “about how people’s perception of what happened here Ferguson and how radically they differ among African-American and Caucasian Americans.

“Does it still surprise you,” Spike, old buddy, old pal, “that there’s a divide in perception and how Americans see this in different ways largely in many cases based on…?” Do you understand what the question was? (interruption) Basically… (interruption) No, no, no. What he’s being asked here in a roundabout way by, old buddy, old pal Anderson Cooper is, “Spike, isn’t it the case that despite the election of the first black president, nothing’s changed?” That’s the question, and here’s Spike’s answer.

LEE: Anderson, I wish it was true, but it’s not. Many people thought that the moment that President Obama put his hand [on] Abraham Lincoln’s Bible and took the oath as the president of the United States, racism would disappear — abracadabra, hocus-pocus, gone — with a so-called postracial area. That is not the case.

RUSH: Aw, damn it! Damn it. Our hopes were so high. I mean, people were hoping and praying, hoping and changing for hope and change. I mean, people just bet everything. They voted in a way they otherwise wouldn’t, hoping to end all of this, and Spike Lee… (interruption) I don’t know why Spike Lee, frankly, is there. I don’t know why he’s a guest, but he is, and so we’ll comment.

So Spike Lee confirming that which I, El Rushbo, have been castigated for pointing out that it hasn’t made any difference — and, in fact, it’s obviously gotten worse. So here we have the first African-American president and excuses are being made why he can’t go because he couldn’t do anything. This, to me, is stunning. Now, I understand security. I understand that it would divert resources.

I understand all of that, but it doesn’t stop presidents from going where they really want to go, folks. He’ll tie up traffic in Manhattan or any other city for three days ago in a row. It doesn’t matter. If he wants to go there, the president will go there, any president. The idea here “the White House” is gonna keep Obama from going. He really wants to go, don’t you know that? You low-information voters, he really wants to go.

Snerdley was smirking at me. I predicted that the news media would set up bureaus in Ferguson. This story’s not gonna end before November. This story’s gonna at least have legs to get it through the November elections. That’s why it’s happening. I said there might even be some bureaus. Shep Smith might not be coming home. Well, maybe Shep Smith is home, but Anderson Cooper, whoever.

Whoever they’ve got. Don Lemon may not be coming home.

Hell, the journalists are becoming part of the story! Wait ’til you hear about this. I mean, so much is transforming dramatically. Journalists are eagerly now becoming part of the story. I mean, Don Lemon’s giving his phone number out to people! “If you need anything, you let me know.” To the looters. Is and to the other family. Yeah, I got time for where you remember. So here’s Anderson Cooper. “Spike, you say it’s obvious the Ferguson police, state police, National Guard, don’t have a handle on this, don’t have a clue. Explain what you mean by that, Spike.” 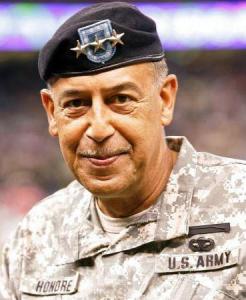 LEE: My wife and I, Tonya, while we were watching the mass on television last night said, “You know what? Retired Lieutenant General Russel Honore is the person who could bring order!” Anderson, you know firsthand what General Honore did with the Katrina in — in — in New Orleans and — and the Gulf, so I really think I’d called him up this morning.

RUSH ARCHIVE: How long was Shep Smith and those boys, how long was Anderson Cooper, how long did they stay in New Orleans after Hurricane Katrina and then how much time did they spend in Houston tracking down the refugees from New Orleans —

RUSH: See? So there I was yesterday talking about it, and last night they asked for Honore to come in and fix it, ’cause nobody there can.