RUSH: I mentioned yesterday that the doctor who was part of the missionary engagement over in Africa, Kent Brantly, who contracted Ebola, was brought back to the US with a coworker, Nancy Writebol. They were given this super-secret special serum to combat Ebola that is grown exclusively in a tobacco plant in Kentucky. I mean, that’s the primary source material for the serum.

Anyway, he was released from the hospital yesterday. He’s totally recovered. No more Ebola. He had a press conference and I mentioned after I’d seen it, it’s been a long time, it’s been many years since we’ve seen something like this in this country. This guy went out, it was all God, all the time. He thanked God for his recovery, talked about prayers. I mean, there’s no question he’s a Christian missionary. But he didn’t hide it. He did not camouflage it. He was bold and out front with his Christianity. There was no fear whatsoever. 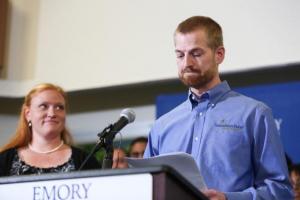 And my point, we don’t see this anymore. We don’t see public recognitions of and devotion to God, because it’s laughed at and mocked and made fun of. Even that’s been politicized, you see. Yeah, only pro-life, wacko, nutcase right wingers believe in God. They’re the only ones that do. And nobody wants to be thought of as a Looney Toon, right winger, pro-lifer kook. And so nobody talks about God, even religious people, other than evangelists and media preachers and so forth. But just average citizens, they don’t bring it up.

Look what happened the other day in school, in Tennessee. A student sneezes, a female student shouts, “Bless you!” She gets suspended, ’cause the teacher says (paraphrasing), “We’re not gonna have godly stuff like that in my classroom. There’s no blessing anybody in this classroom.” The teacher suspended the student. The student had to spend the rest of the suspension period in the principal’s office. There’s no praying or referencing of God at commencement ceremonies. Pledge of Allegiance, can’t do that. High school football games, no reference, no prayers, pregame prayers.

It’s very, very odd to see somebody just come out and unabashedly express their love and thanks for God. And as a result of this, there is absolute fury on Twitter. There is fury and anger all over the social media directed at Kent Brantly. His was a feel-good story, and it wasn’t that long ago that what he said would not have been controversial at all. In fact, it would have been quite normal. It was not that long ago that things like what he did yesterday were pretty much part of the national fabric. An open expression of belief in God, a public acknowledgement and thanks, prayer and this kind of thing.

But of course it’s just been under assault and under attack for a generation, maybe more, intensely. And now there’s a lot of fear, and people hide even their Christianity because it’s becoming politicized, as everything is. And so Twitter, they just lit the guy up. They called him, I mean, the names on these things. You know, Walter Isaacson, let me run an idea by you.

Walter Isaacson, who wrote the biography of Steve Jobs and Benjamin Franklin, couple of others, used to be managing editor at TIME. He is now head of the Aspen Institute, which is headquartered in Washington, but they have their meetings in Aspen. It’s kind of a cool gig. And he used to, for a short time, run CNN. He had a piece that ran on the Aspen Institute website that TIME Magazine reprinted on their website yesterday, and it had to do with the notion of privacy versus anonymity.

He tried to make the case that the two are entirely different things but that many people are confusing them and that they’re wrong. People who think that privacy equals anonymity are wrong. Anonymity is one thing. Privacy is quite another. But he made the point that he doesn’t like all this anonymity, particularly on social media. And he has a theory, and his theory is quite simple. That if you couldn’t say things without anybody knowing who you are, you wouldn’t say over half of what you say.

If you had no anonymity, I don’t care if it’s Twitter or if it’s in the barbershop or wherever, if anonymity were eliminated, if everybody had to be identified by their real name on these places, that it would clean up all of this drivel and all of this obscenity and all of this just mindless, senseless, gutter-filled rhetoric that shows up, not just on Twitter, but in the comment sections of a lot of websites.

He didn’t propose anything. He didn’t propose mandatory — didn’t propose government get involved. It was just him ruminating and thinking that it might be something that would raise the level of discourse. Everybody talks about civility and how we’re losing civility. And his theory is one of the reasons why is that you can say whatever you want in so many places in this country with nobody knowing who you are. And the moment people know who you are, you will not say some of the trash, you won’t talk some of the trash that you talk.

I started the piece, I was prepared to reject it when I started it because it’s a thin line, anonymity, privacy. And one of the reasons I was prepared to reject it is I’ve often said if there’s one thing I could have back that I’ve lost in life, it’s anonymity. I would love to be anonymous, I can’t tell you. But of course it’s impossible. I’m on the radio. My chosen profession, I have to wave anonymity good-bye. I mean, it’s senseless to even dream about it. It’s simply not possible. But it doesn’t mean that I can and do dream about it. 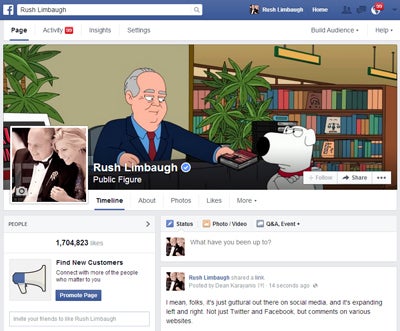 RUSH: Oh, yeah. On Twitter they’re calling Kent Brantly names like douchebag, and that’s minor compared to some of the names they’re calling him. And then you’ve got some of the snarky, “Oh, yeah, oh, yeah, God decides to save the white doctor but let hundreds of blacks die from Ebola. What kind of God is your God, Brantly?” It’s just vicious stuff, and it’s all anonymous. And that’s why this piece by Walter Isaacson.

He starts out using Uber as his example. He said, “One of the many cool things about Uber is that it allows passengers to rate the driver.” And so the driver, because he knows he’s gonna be rated, behaves politely, very nice, very friendly. But in addition to that, you know what? The drivers can rate the passengers. And so if passengers get poor ratings, drivers don’t want to carry them, don’t want to drive them, take up the account.

His point is that when everybody is being rated, everybody’s more civil. You’re likely to be a bit nicer. The world becomes slightly more civil, Isaacson says. You’ve heard the old saw, that character is what you do when nobody’s looking? Character’s how you behave when nobody’s looking? The same thing with morality. That’s actually traceable back to Plato in The Republic who was ruminating about it philosophically and how you define goodness and decency and so forth.

RUSH: So, anyway, I think there’s something to this. If everybody who posted something on the Internet had to be identified by who they really are… I’m not suggesting it, but I think the theory is true that if everybody had to go by who they really are, their true identity, that you’d have a lot less of this. I mean, folks, it’s just guttural out there on social media, and it’s expanding left and right.

Not just Twitter and Facebook, but comments on various websites. Some people are affected by it psychologically. Some people read this stuff and think, “My God, what’s happening to our country? Has it always been this way? Have we always had this many stupid people out there? Have people always been this vulgar?” People don’t have the answers to that because there hasn’t been any way to measure it until now.

So you don’t know if it’s simply allowing the people who’ve always been this way to finally come out and behave this way, or if it has creating this new level of uncivil discourse. Some people get concerned about it. The dangerous slope is that thin line between anonymity and privacy. They’re not the same thing, but what if they became the same thing? That would be a distinct problem.

Anyway, I just found it fascinating because this poor doctor was just ripped to shreds simply for thanking God that he’s still alive. You know, it’s one thing that you can disagree with the guy’s religion. People have different beliefs. It’s one thing to say you don’t believe in God, but, man, when you get so angry and upset by people who do, especially Brantly! Brantley’s harmless.

Brantly’s not using God as an excuse to kill people.

He’s doing the exact opposite.

It’s all quite illustrative.