He’s been tempting and he’s been threatening and he’s been assuring. I mean, Luis Gutierrez is fit to be tied! Luis Gutierrez, Chicago Democrat, was running around the week before last setting it up. “Oh, yeah, it’s gonna be big! It’s gonna be exciting. We’re putting systems in place now to be able to handle all the people that we’re gonna drag out of the shadows,” and blah, blah, blah.

And he didn’t do it! And do you know why he didn’t do it? To spare Democrats a disaster in the elections in November, because it’s not something the majority of Americans are for, and he couldn’t find a way to blame Republicans for it, and he couldn’t tease or taunt the Republicans into either impeaching him or threatening to shut down the government.

RUSH: Now, I mentioned at the beginning of the program, ladies and gentlemen, that Obama has decided to delay amnesty for illegals until after the election. My contention to you today and weeks ago was that he never was going to do this. It was a threat that was never actually going to happen. He had a lot of people believing it was going to happen, though. Poor Luis Gutierrez in Illinois. Jorge Ramos at Univision or Telemundo, I forgot which.

La Raza, even a number of Democrats were convinced Obama was going to do this. And why? “Well, for the good of America, and because this Congress is a do-nothing Congress and this Congress won’t act.” You know, more and more Democrats are beginning to think the Constitution doesn’t exist, and if Congress will not let you do what you want when you’re president, you do it anyway!

That’s the statist view, the totalitarian view. If the Congress won’t help, then screw them and you do it anyway. And they thought Obama was going to do this. But I, your host, El Rushbo, told you back on August 5th — August 5th, over a month ago. Here is the 26-second sound bite.

RUSH ARCHIVE: Obama had total control of the House and the Senate and he used that for Obamacare. Now, the Republicans own the House and maybe they’re gonna win the Senate, and that’s when Obama… I don’t think he’s ever gonna do it. The only way he’s gonna grant blanket amnesty to five or six million or all 11 or 12 million or whatever, is if the Republicans get the blame for it.

RUSH: He can’t find a way before the election to see that the Republicans are blamed for it, and I say “blamed” on purpose, because this is not having that the majority of the country support, contrary to what you see in the media. The majority does not want the law of the country flouted this way.

A majority of Americans does not want amnesty granted to 11 million, 5 million, 12 million, whatever it is overnight, blanket without due process taking place. They don’t want this occurring without shoring up the border. Border security being number one in terms of importance. So whoever does it is going to get the blame for it, not the credit. There is no credit for doing this!

So Obama has never, in my mind, been serious about granting amnesty. He knows the country doesn’t want it. But if he can get the Republicans blamed for it… However. If he has to do it, the last desperate act, “I’ve got to do this for the good of the country and the Republicans…” But he can’t find a way, and the proof is that he’s now saying, “I’m not going to do this until after the election.”

Why would it matter?

By the same token, if this is such a good thing to do, if it’s such the right thing to do, if it’s so good for the country, why wait? Why isn’t it done already? We’ve been debating amnesty, in essence, in intense ways for the past five years. Why wait? Why didn’t he do it the first two years, when he had the Democrats in control of House and the Senate and nobody could have stopped him? The Republicans didn’t have the votes to stop anything.

Why did he do it then?

Because there isn’t any credit accruing for doing it. There is only blame, and he knows this as well as anybody. (interruption) Will he do it after the election? We’ll see. Here’s what he said on Meet the Press yesterday. Chuck Todd interviewed him. Todd said, “I want to go to immigration. You made a decision to delay any executive action until after the election. What do you tell the person that’s going to get deported before the election, that this decision was essentially made in your hopes of saving a Democrat senate?” 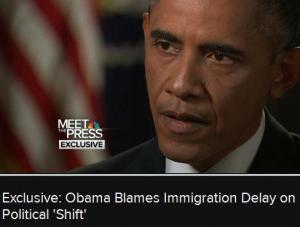 OBAMA: Well, th-th-thhat’s not the reason. The country is going to be better off if we have an immigration system that works. We have a Senate bill that would accomplish that. The House Republicans refuse to do it and what I said to them was: If you do not act on something that is so common sense that you got labor, business, evangelicals, law enforcement — you got folks across the board — supporting it, then I’m going to look for all the legal authorities I have to act. I wanna make sure we get it right.

RUSH: Wait a minute! You’ve had years to get these ducks in a row. You’ve known for years the House Republicans are not going to sign onto the Senate bill. The Senate bill is the Chuck Schumer bill and trust me, it’s amnesty. He doesn’t want to call it amnesty, but that’s effectively what it is. By the way, the story is out now that 60,000 illegals might now be deported. (Gasp!) Really? What does the law say? The law says that is what should happen. The law doesn’t mean much now, of course.

RUSH: So Obama says, “No, no, no. I can’t do immigration reform before the election because, well, you know, the Republicans won’t go along with it,” blah, blah, blah. Chuck Todd says, “Mr. President, it just looks like Election-Year politics to people.”

OBAMA: Here’s the other thing, Chuck — and I’m being honest now — about the politics of it. This problem of unaccompanied children that we saw a couple weeks ago where you had, from Central America, a surge of kids who are showing up at the border. It got a lot of attention and a lot of Americans started thinking, “We got this immigration crisis on our hands,” and what I want to do is, when I take exclusive action, I want to make sure it’s sustainable. I’m going to act because it’s the right thing for the country. But it’s gonna be more sustainable and more effective if the United States understands what the facts are on immigration.

RUSH: Well, when are you going to start telling us? I mean, how many years has it been now? So President Obama said on Meet the Depressed, the new version with F. Chuck Todd on Sunday that he now can’t do amnesty until the American people understand it. And thee these stupid…? Sorry. Also, did you notice, “Chuck, I’m being honest now.” Wait a minute. It’s not nitpicking to say does that mean you normally aren’t?

“Chuck, I’m being honest now.” Okay. “These unaccompanied kids, they showed up.” What he’s admitting is they screwed up the whole thing, because the American people saw that and understood quite properly what’s going to happen! We saw what was going to happen and we don’t want it to happen. To Obama, that now has to be explained as an aberration and something odd and kooky and weird.

A one off. It’s not going to happen.

Until they can figure out a way to tell the American people that they didn’t see what he saw, he can’t go ahead and do amnesty. It’s just that simple. So while he’s telling Chuck he’s “being honest now,” he’s got to figure out a way to tell us, we didn’t see what we saw with this flood of kids and we really attached way too much do it. It didn’t happen. That’s what he’s got to convince us of.

RUSH: Back to the audio sound bites here, folks. I mentioned earlier Luis Gutierrez, Democrat Illinois, all excited. Last week and the week before, just couldn’t wait. Obama was going to do executive order amnesty and Luis Gutierrez is running around helping everybody get ready for it, plan for it, put systems in place and Obama pulled the rug out from under him. He was on This Week with George Stephanopoulos yesterday, who said the White House is calculating that all is going to be fine with the Latino community if he acts on immigration after November. In other words, whenever he does it, Luis, is going to be fine. He doesn’t have to do amnesty before the election, is that right? 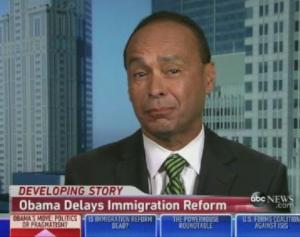 GUITIERREZ: Playing it safe is what is going on at the White House and among Democratic circles. And playing it safe means walking away from our values and our principles. They’ve looked at polling in four or five states where there aren’t large Latino constituencies and said that’s the way forward without thinking of the impact that that policy might have in Illinois, in California and Colorado. And so they’ve walked away. Playing it safe might win an election. Sometimes you lose an election playing it safe also. But it almost never leads to fairness, to justice, and to good public policy that you can be proud of.

RUSH: Right. So here’s Luis Gutierrez, Democrat in good standing, defining fairness and justice as law breaking. Lawlessness, from illegal immigration to Obama literally peeing on the Constitution. That is fairness. That is justice. Ripping the Constitution to shreds, ignoring Congress, executive amnesty. That’s fairness; that’s justice. That’s good public policy you can be proud of if you’re a Democrat. Obama is playing it safe and walking away, and that’s not what wins elections. You lose elections.

He’s really fit to be tied, because he believed him. I guarantee you, Luis Gutierrez has been running around the past two weeks, he was convinced this was going to happen. And the only reason to be convinced, it wasn’t the media. He had to have some heads up from somewhere in Washington that it was going to happen. Stephanopoulos said, “So, if the president acts in November are they going to forgive him [the Latino community] and go forward?”

GUITIERREZ: What does that mean, “coming out of the shadows”? That means not being hunted down. That means not being treated like a fugitive. And President Barack Obama in the last five years has deported more people than any other president in the history of the United States. And while we wait until November, ’cause that’s the president’s decision, there’s going to be another 60,000 people deported. So there is pain and suffering in the community and there’s a lot of anguish and anger.