RUSH: Back on Monday I had an audio sound bite. I didn’t get to it because the circumstance didn’t present itself. The circumstance has now presented itself. I mentioned earlier in the program the status-of-forces agreement, and I made the claim that we really are in this circumstance today — ISIS — and by the way, ISIS, ISIL is the same thing. Islamic State of Iraq and Syria, or the Islamic State of Iraq and I forget what the L stands for off the top of my head. It’s the same thing. It’s not two different groups.

It’s no different than some people pronounce it Usama bin Laden and some say Osama Bin Laden. It’s the same thing. There’s a third way this group is referred to, just I-S, the Islamic State. That’s when Obama said they’re not Islamic, and they are. They’re the old Al-Qaeda in Iraq. The point is they wouldn’t exist, clearly not as powerful as they are, had we not cut-and-run from Iraq.

Iraq, in their worldview, was supposed to be one of the biggest mistakes the country has ever made, by George W. Bush, an incompetent cowboy just trying to avenge his father’s attempted assassination by Saddam. Or Dick Cheney trying to enrich Halliburton or whatever the kind of cockamamie crap they came up with. But the bottom line is Iraq, for them, was a political opportunity. They had to trash it. They had to render it phony, unbelievable, unreal, unimportant. It had no relationship to the United States whatsoever, the War on Terror. That’s how they looked at it and talked about it.

For five years they did everything they could to discredit Bush and anybody else that supported it, including General Petraeus, you remember all that. So Obama campaigns for president, gets elected on the premise that he’s gonna finally get us out of here. He’s gonna end torture. He’s gonna close Gitmo. He’s going to close this whole horrid chapter of history that shows what an absolute reprobate this country is, what an absolute disaster America is. He’s gonna end it and he’s gonna put it back together. The planet’s gonna heal and the world is gonna love America again. There isn’t gonna be any more Al-Qaeda, and there isn’t gonna be any more terrorism, because Obama’s here, and he has a special way to relate to these people ’cause his name is Barack and he grew up somewhere else.

He’s a powerful guy. He’s the smartest guy. He’s a messiah. He can do it all. He can heal the planet. He can lower the sea levels. He can lower the temperature. He can save all the endangered species. He can get rid of oil. He can go with alternative energy. We could have no pollution ever, and nobody’s ever gonna die. We’re gonna have universal health care to make sure nobody ever dies. It was gonna be a utopia and it was all centered around the fact that we were gonna get the hell out of Iraq. Right?

And that’s what they did. First chance, skedaddled, left no residual force because they never took it seriously as a military engagement. They never took it seriously as a military operation. They couldn’t afford to all of a sudden take it seriously after Obama wins the White House. They’d spent five years trashing it. They and their friends in the media had spent five years telling the American people that Iraq was a total boondoggle, a mistake. We should never have been there. We should never have gone in the first place, and we’re not gonna leave any evidence that we’ve ever been there. It’s an embarrassment.

So that’s what he did. He gets elected and we got out of there. The thing is, in a couple of key ways Iraq was a win. There were democratic elections taking place there. People were actually voting for the first time. It was a win. But because in the Democrat Party view, the Obama view, it was never legitimate, and because of all the campaign promises, because of the five-year campaign to discredit it and destroy anybody involved with it, they pulled out and they left no residual force. We still have bases in Germany, for example. We have a presence in the in the Far East, in Japan. We always maintain status of forces in places where we have secured victory to keep the peace. Serious thing.

We didn’t in Iraq. Obama pulled ’em out and he claimed he couldn’t get a deal with Nouri Al Maliki. But we had a deal. He just didn’t want to leave anybody. Couldn’t afford it. He had to placate this rabid, insane, lunatic fringe base of his, which consists of many very wealthy donors. So because of that Iraq has been vulnerable, and that is why any insurgent group that wanted to has had pretty much a free rein in rising to power. The Iraqis were never trained.

Now, I want to take you back. This is the audio sound bite I had on Monday. Megyn Kelly aired this on Fox last night after the speech. It’s from 2007. I had it in my roster on Monday and I kicked myself here for not getting to it. There’s a lot of stuff yesterday I didn’t get to, either. I’ve got a holdover Stack here. This is July 12th of 2007. It’s at the White House, and Bush is holding a news conference.

BUSH: I know some in Washington would like us to start leaving Iraq now. Begin withdrawing before our commanders tell us we are ready would be dangerous for Iraq, for the region, and for the United States. It would mean surrendering the future of Iraq to Al-Qaeda. It would mean we’d be risking mass killings on a horrific scale. It would maybe allow the terrorists to establish a safe haven in Iraq to replace the one they lost in Afghanistan. It would mean increasing the possibility that American troops would have to return at some later date to confront an enemy that is even more dangerous.

RUSH: Bingo. Bingo. George W. Bush, seven years ago, calling it. Remember now, he’s the idiot. He’s the dunce. He’s the cowboy. Obama, now we’re talking. Real Ivy League brilliance. Yeah, Obama. Now we’re talking real genius, got that great crease in his slacks. David Brooks noticed, oh, yeah. Man, this guy, he’s better than any of us. This guy’s so smart. We can’t even keep up with him. He’s so smart, we can’t even see him, he’s so far out in front. Bush, what a dunce, what a glittering jewel of colossal ignorance. Listen to the way Bush talks. He sounds like a dumb Texan and he’s just stupid. Embarrassingly stupid, embarrassing everybody in America, how stupid our president is.

George W. seven years ago calling exactly what has happened. “We have to return to confront an enemy even more dangerous.” Make no mistake, Obama is doing everything he can to try to make sure the blame for his having to go back to Iraq never leaves Bush. But we’re not gonna permit that on this program. Matthew Cooper at Newsweek. I didn’t know Newsweek still existed. I know that the print version doesn’t exist. I didn’t know Newsweek, I thought it got all folded. Well, it didn’t, and there’s a guy writing there named Matthew Cooper. There have been a lot of Matthew Coopers in Washington over the years. I don’t know which one this is. But this is a far-left publication. Newsweek is brutal here on Obama. 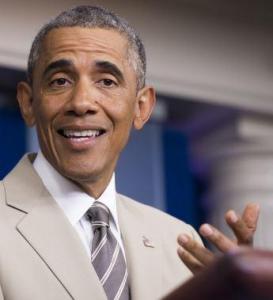 “The Four Most-Depressing Moments in Obama’s Speech,” from Newsweek. Obama said Somalia and Yemen are successes last night, folks. How many of you even know what’s happened in Somalia and Yemen? The way he thinks he can get away with it, low-information voters, “What, we had an anti-terrorist plan Yemen and Somalia?” Most people don’t even know, so Obama (imitating Obama), “Yeah, great examples of success stories.”

But Matthew Cooper says, Good lord. At least when Bill Clinton famously pointed to Bangladesh as an economic model for micro businesses, he had a point. … ItÂ’s not that anyone expects Somalia and Yemen to be Swiss-like after hearing from our drones and special forces. But Somalia is utterly chaotic and Yemen is still terrorist rich. We havenÂ’t destroyed any groups there,” and yet Obama’s claiming success.

Folks, you’ve gotta understand. When Obama is compared to Bush, I mean, imagine whoever you hate most and being compared to ’em. Oh, wow, oh, that is a deep wound that you can’t believe. For Obama’s Iraq policy to be compared to Bush’s by these people. The third thing that was scary, “The myth of moderates we can support.” And Obama, he did. He kept talking about moderates here, moderates there. Syria, moderates in Iraq that we can team with. And there aren’t any. There simply aren’t any.

And then he talked about the Iraqi army. “We just spent countless dollars to train the Iraqi army for the past ten years. And what did it get us? A force that collapsed when ISIS rolled across Iraq.” So now Obama is going to train the Iraq army in two weeks, get ’em up and running. The Iraq army represents the ground phase of the operation, the Iraq army. For those of you students in military conflict, the ground phase is where you win or lose. You can have all the drones and jets you want, but the ground phase… This is Newsweek ripping Obama and his speech to shreds.