RUSH: We’ll start with Dianne in State College, Pennsylvania. Great to have you on the program. Hi.

CALLER: Hi there. Thanks for taking the call, and I actually have a tech question first. Was that Snerdley I spoke to?

CALLER: Ah. I feel so amazed. Thank you. I called to get your insights on something that came up the other day. I was having my hair cut and the beautician was musing about why the sudden anger at ISIS. What she pointed out is that ISIS had been doing horrible things to people for quite a number of years. They’d been burning, beheading, attacking Christians, killing people.

Yet now, all of a sudden, the horror is being presented to the American people. One of the things that she was wondering is if it was because all of a sudden ISIS had now attacked a journalist. The comment she made was, the journalists see a journalist as one of their own. They don’t relate to the Christians and the other people over there that were being attacked. I thought that was an interesting question.

RUSH: Well, it may be a factor, but I don’t think so. I actually don’t think that is the number one reason. I’ll tell you the number one reason why everything going on in Iraq was ignored long before ISIS beheaded James Foley, and it’s all about protecting Barack Obama. Barack Obama got elected on the premise that Iraq war was illegitimate, should never have happened. It was stupid Bush cowboy-ism and it was dumb!

It was stupid, it was a waste, and he was gonna get us out of there. 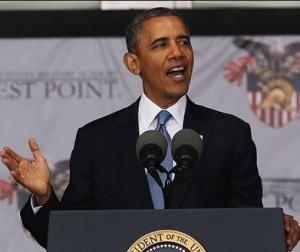 He got elected on that basis. The Democrat Party drove their base insane for five years of incessant, nonstop criticism of the Iraq war. So Obama gets elected and has to get out of there. He doesn’t leave a residual force. He ignores a Status-of-Forces Agreement. He doesn’t care! He makes it clear he doesn’t care what happens to Iraq after we leave, because we shouldn’t have been there in the first place.

He got elected on that premise that it was a total waste of time, a total waste of American military might and personnel. So in order to protect Obama, there was no reporting of anything really going on in Iraq that was problematic or destructive, because there wasn’t gonna be any reporting to make Obama look bad. I think the reason why all of a sudden the beheading of the journalist caught everybody’s attention is there was a video of it.

Just like the video inside the elevator at that casino in New Jersey. If you wanted to watch it, you could. There was a video, and once the video hit, it was impossible to ignore it. There was pictures. Now, the fact that it’s a journalist, that would cause unity among journalism practitioners, no question. It’s not the main reason, though.

RUSH: Benjamin in Dallas, you’re next. It’s great to have you, Benjamin. Hi. How are you?

CALLER: Hi. Thanks, Rush. Um, I’m a little confused by Obama, though. We’re gonna bomb ISIL but we’re gonna support ISIS, is my gist of it. What do you think about that?

RUSH: There is no difference in the two. In fact, in fact, there are some people who are beginning to wonder what in the hell Obama is doing by pronouncing it ISIL and trying to confuse people. ISIL and ISIS are the same thing. They use three names: ISIS, which is the Islamic of State Iraq and Syria. ISIL is Islamic State of Iraq and… I forget what the L stands for. I can never remember it. And then just IS. (interruption)

Levant, right. And then IS is just Islamic State. It’s the same bunch of people. It’s no different that Fox News pronounces it Usama bin Laden, and they pronounce it Usama bin Laden instead of Osama Bin Laden. The continued use of the term ISIL has a lot of people scratching their heads. “You know, what’s Obama really trying to accomplish here by calling ’em, and to whom is he speaking when he uses that?”

It’s really curious, because they’re basically just one and the same. The real interesting thing about this, not to just to rehash this, but let’s go back to the summer 2013. Remember Obama drew this red line for Bashar Assad, because in the summer of 2013 the popular consensus was that Bashar Assad was gassing his own people?

He was murdering, committing genocide against his own people, which happened to be a supposed civilian uprising against the Assad regime, demanding their freedom and release from the yoke of control exhibited by Bashar. There were a lot of people that were questioning that analysis saying, “He’s got no reason to be doing that. He’s not losing the civil war. Why would Bashar Assad be doing this?”

I ran across a really comprehensive piece in a foreign policy digest which made the case that, in fact, it was not Bashar Assad that was committing atrocities against these people; that these people were committing the atrocities against their own in an effort to make it look like Assad so that Obama and the rest of the Free World would come in and take out Bashar. Now, that group, the supposed civilian uprising, was ISIS.

It used to be called Al-Qaeda in Iraq, and they are a group which grew and came into existence and really prospered in the vacuum that was Iraq after we pulled out and did not leave a residual force to deal with any of this. They spread from Iraq to Syria, and they started committing mass mayhem against citizens in Syria made to look like it was the Syrian government doing it.

We were on the verge of allying with those people last summer against Bashar Assad. For whatever reason, we pulled back. It was just another example of Obama drawing a red line and ignoring it and getting the reputation of paper tiger. Now we are ostensibly assisting Syria in taking the battle to ISIS, ISIL, whatever Obama wants to call them.

That has prompted us to tell the government of Bashar Assad, “Hey, don’t shoot down our planes! We’re gonna start bombing. We may start bombing inside Syria, so don’t take out our planes. We’re on your side.” It’s stunning. It’s a literally stunning reversal. It was so close a year ago that we actually were on the verge of supporting this group now that has become Public Enemy No. 1.