RUSH: This is amazing how this kind of stuff works. It was just yesterday on this program that we were talking about the usual scare tactics Democrats use, because there was a story, CNN, Dana Bash and Deirdre Walsh did a story on how the Republicans are using fearmongering tactics against Democrats, accusing the Democrats of all these horrible things. And I said, “No, no, no, no. A, it’s not happening. B, it’s the other way around.” It’s the Democrats who are.

And look what we have here, from the National Journal: “The Democrats’ Latest Line Of Attack: Hitting Republicans Over Entitlements.” Latest line? This is from a playbook that’s 30 years old. “The Democrat Senatorial Campaign Committee will release a new ad today –” that was yesterday, is this Thursday? So there’s a football game tonight. That’s right. That’s right. It’s the Giants and the REDSKINS tonight. How about that.

Phil Simms, by the way, color commentary, CBS, they’re gonna be counting the number of times he mistakenly says Redskins ’cause he has pledged never to say that word during a telecast. I saw a story. They’re gonna be eagle eyeing it. I wouldn’t be surprised if CBS themselves puts a Redskins counter on the screen every time Simms screws up and says “Redskins.” Nah, CBS won’t do it.

“The Democrat Senatorial Campaign Committee will release a new ad –” they did yesterday “– going after GOP Rep. Bill Cassidy of Louisiana over Medicare — the latest in national Democrats’ efforts to attack Republican candidates in top Senate races over entitlements. ‘Bill Cassidy needs to know that seniors are paying attention,’ one woman says in the ad. ‘Seniors are troubled by Bill Cassidy’s vote to raise the eligibility age for Medicare. … terrible idea.'”

They accuse him of wanting to replace Medicare with a voucher system, want to cut Social Security. Practically predicted this yesterday when we pointed out CNN and AP both had stories about how the Republicans were using politics of fear against Democrats. The claims are nonsense.

Now, grab audio sound bite number two. It’s not just entitlements, ladies and gentlemen. They’re bringing everything out. They’re going back to all of their surefire victory pages in the playbook, the War on Women and all of that, and now the Congressional Black Caucasians have rallied and are claiming the Republicans are trying to suppress black votes. Again. The Republicans wouldn’t know how to do this! If I were to call anybody, choose a Republican name. Let’s say, I don’t know, let’s just say Boehner. No. Let’s use Cantor ’cause he’s not there. I don’t want to put words in anybody’s mouth. Somebody says, “Look, Rush, call Eric Cantor and tell him the only hope is we’ve gotta suppress the black vote.”

“Eric, look, you guys need to get going on this thing to suppress the black vote.”

“Yeah, okay, how? What do you mean, suppress the black vote?”

With all the early voting, and all the Jimmy Carter types at all the election places monitoring the vote and all the Democrat ballot box stuffing and the lack of voter ID, I don’t think they would know how to suppress the black vote. But that doesn’t matter. Here is John Lewis during a Congressional Black Caucasian forum on African-American voters in the midterm elections. The panelist, John Lewis, the moderator is the author Jeff Johnson who says, “If there’s one thing all of us need to be doing moving into November, Congressman, what is that one thing?” 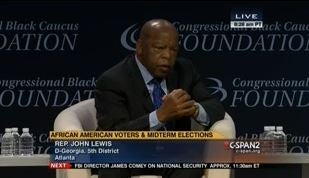 LEWIS: We must stand up and fight and push by going to the polls and vote like we never voted where. We must understand that 50 years ago this year, three young men that I knew gave their lives trying to make it possible for all of our citizens to become participants in the democratic process. If we want to respond to Ferguson, we got to vote! It is powerful. Got to do it. And we must do it. If not, we’re gonna go backwards.

RUSH: And what is causing this panic? It has nothing to do with Republicans (interruption) Exactly. There are two things driving this panic from the Congressional Black Caucasians, and it is, A, Obama is not gonna be on the ballot, which was responsible for a huge uptick in black turnout the last two elections. And the second thing, Obama’s approval numbers are in the toilet. The third thing, black unemployment, what, 14%? And in the twenties in teenage black unemployment.

There are stories all over the place that despite six years of the first African-American presidency, life has not improved for African-Americans in this country. So it’s time to go to the drawing board and somehow blame this mythical Republican voter suppression, ’cause they are aware, without Obama on the ballot, turnout is going to be iffy.

JONES: You remove the African-American president. State level, federal level, it’s all connected. We got myopia! We can’t see anything! We don’t educate ourselves as to what’s going on in our community. Ferguson, Missouri, is an abomination! Sixty-seven percent population and 6% voter turnout? We have been fighting for the right to vote and to hold on to the vote ever since we first got it in 1870. It’s nothing new. It’s always been under attack. When did the Supreme Court decide they were gonna review the Voting Rights Act case? Three days after Obama was elected in 2012. Three days! It’s our individual duty to self-educate?

RUSH: Who would you rather listen to, that babe or Hillary?

RUSH: You know, all this “black turnout” business is so silly. It’s all been caused… If there is a reduction of black turnout, it’s ’cause of Obama. I mean, he’s done nothing for them, in their view. I’m talking from their perspective, what their expectations were versus what’s happened, which is nothing. Obama’s a huge disappointment. But nevertheless, there still was a loyalty.

He’s not gonna be on the ballot, and there’s not a whole lot to excite outside of that. You know, black voter turnout exceeds, as a percentage — not in total number, of course. But black turnout in percentage exceeds white voter turnout even in states with strict ID laws, and this is a claim made by a pundit on here at PolitiFact.

I haven’t clicked on the link yet, and it’s probably true, but this is just the usual resorting to the old playbook standards that have worked in the past.