RUSH: What is dominating everything in the NFL today? Aside from the media trying to force the commissioner out? And make no mistake, that’s exactly what’s going on. For those of you unaware, it’s not written anywhere. It’s one of the understood resume enhancements for advancement in journalism.

If you take somebody out, if you expose a fraud or a cheat — or if you just take out somebody that you don’t like who has a lot of power — if you as a journalist are instrumental in doing that, then you are considered worthy of advancement in that industry, and it’s best exemplified by Watergate. Woodward and Bernstein and getting Nixon, forcing Nixon to resign.

Since then, if you troll the halls of any journalism school and grab any first or second year J-school student and say, “Why are you here?”

You’ll hear something along the lines of, “I want to make a difference!”

“Yes. I want to make the world a better place..”

“Well, that’s not what journalism is.”

“Yeah. But it’s not about making the world a better place. That’s not what journalism should be.”

“Well, then you need to run for office or work for somebody who’s elected, because that’s what they do. Or maybe become the owner of your own company and establish your own business culture, but journalism’s not about ‘making a difference.’ Journalism isn’t about ‘making the world a better place.’ In fact, journalism is about reporting what other people aren’t around to see.”

So, if you then persist, you’ll eventually hear a journalism student say, “And you know what else I want? I want to speak truth to power.”

“Oh, really? What does that mean?”

“It means I want to hold the powerful accountable.”

It’s just an assumption in journalism that the powerful are guilty, that they couldn’t become powerful otherwise. Not legitimately. Now, there are exceptions, obviously. Democrat presidents? (snorts) That’s perfectly fine. That power, not only are we not going to take that power out, we’re gonna help that power get built!

Because journalism now is uber-partisan. But one of the base elements is taking people out, destroying people, destroying their lives — like they tried to do with Mitt Romney, for example. So one of the things happening here in this NFL thing, is they’re trying to get Goodell, and they will tell you, if you know how to listen. 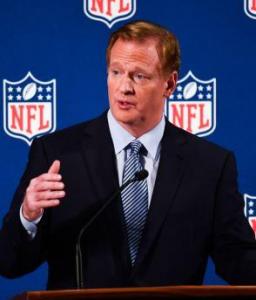 Turn on any sports talk show, read any sports website, and you won’t have any trouble finding commentary from any number of people who will just flat-out openly say, “Goodell’s got to go. Goodell’s a liar. Goodell’s lying. Goodell… Goodell’s gotta go. We’ve gotta get rid of Goodell.” It’s a fever that spreads, and these people get caught up in it, and after a while they even forget why.

It just becomes a way that journalists can demonstrate to themselves and everybody else their power and also effect the kind of change politically that they want, because journalism is total politics. Total. So the effort here is to get Goodell. The reason they’re trying to get Goodell, the way theory trying to get Goodell is spouse abuse. So the picture has been painted that it’s horrible in the NFL.

In other words, these incidents occur far less in the NFL. The thing is, there are cameras on the NFL all the time. There are cameras on all the players who play every Sunday. These guys are TV stars. Football players are TV stars, and football is a reality show, and it’s part of the daily soap opera. It also is in the crosshairs now because of concussions and the injuries that the game causes to people who play it, and it’s a target.

It’s just become a huge, huge target, and the people that run it have got to go. In light of all of that, there’s this effort to create the image of the NFL as the absolute bastion of brutish, reprehensible male predatory behavior is all over the place. Yet I ran across some statistics. This is, I say, something that we all know because we pay attention to the news.

But it doesn’t register because there aren’t any pictures of it, and there hasn’t been a big effort to do anything about it. But look at this. “The NFL is currently mired in controversy surrounding issues of domestic abuse among its players, as well as how Commissioner Roger Goodell has handled the issues. There have been five arrests for domestic violence and one arrest for child abuse since the start of 2014.

“That doesn’t count multiple arrests for assault, drugs, DUI, and more as USA Today has tracked. Disturbing?” Well, yeah, but… But! “Compare that with the 325 school teachers and employees arrested for sexual misconduct with children since the beginning of the year.” The bottom line is this: Your child is much safer in an NFL locker room than he or she is in any public school in America.

Stop and think. How many stories do you see here and there, now and again, over a period of time about a teacher abusing a child? Speaking of which, how many of you can recall being shocked and surprised at how many of the teachers abusing young students are women? I’m sure, as you start thinking about it, your memory kicks in. You’re starting to say, “Yeah, yeah! I remember that.”

“US Senator Pat Toomey (R-PA) and US Representatives Mike Fitzpatrick (R-PA), Frederica Wilson (D-FL), and Steve Stivers (R-OH) recently attempted to bring attention to the problem in a press conference and news release announcing a bill to protect students from sexual predators. It was met with a resounding thud, as primarily only local Pennsylvania news outlets covered the announcement, according to a Google search.

“Yes, there are hundreds of NFL football players versus millions of school-age children, so the representation of these instances of sexual misconduct with school is statistically smaller. That doesn’t excuse the response and horrible judgment by teachers and administrators…” The point here is look at the differing degrees of intensity. The focus of evil in all this is the NFL.

We’ve gotta get the commissioner!

We’ve gotta get those guys!

Everybody is focused on it, and now pregame shows of football games are taken up with this issue before they even get to the football aspects of the game they’re carrying later. And yet here’s an issue that is literally swept under the rug every time an incident is reported. The teachers union has a lot to do with that and politics has a lot to do with it, too, because leftists run the education system, and they circle the wagons and protect each other.

But I found this. I ran into this a couple nights ago, and I found it fascinating. You know, just as a societal study of the way the media is able gin up overflowing emotion and anger on certain things and at the same time able to suppress and hide the same conduct, oftentimes worse, in other places. The murder rate in Chicago, for example. Black-on-black crime in Chicago versus one incident in measuring, Missouri.

Look at the difference in media coverage there. That’s politics, that’s the media, and that’s what’s… By the way, don’t misunderstand here. I don’t think any of you are, but for some nitpickers, this is not to defend what’s happening in the NFL. This is an exercise here in, again, understanding/comprehending journalism. I mean, the morally outraged would have you believe that no instance of child abuse is tolerable.

“It’s not permissible! We’re not gonna put up with it.” Yet, depending where it happens, they don’t even care, and they don’t spend much energy at all reporting it. But let it happen in the NFL, which is now the latest target of the media, for a host of reasons. It’s why I say, “I don’t think the NFL and its owners, even now, realize fully who it is coming after them and why.” I hope they do, but I haven’t seen enough evidence to be confident of that.

RUSH: Here’s Mark in Houston. Mark, you’re next on the EIB Network. Hello.

CALLER: It’s great to talk to the Children’s Book Author of the Year because I know it’s the biggest dig of all. It hurts ’em when they hear that. But I called because I believe that all these people that go to this J-school or journalism school are coming out and becoming salesmen, and they should be called such. Like: “Bob Schieffer, National Sales Director for Deface the Nation,” or “Christiane Amanpour, International Sales Correspondent.” You know, that’s gotta be an insult to those people because that he really what they do, and they should be treated like snake oil salesmen.

RUSH: You know, I like that. They are advocates. They are advocates of a point of view. And, by the way, folks, let me say something about that. You know, I think this idea that journalists have to be objective and unbiased is impossible. It’s impossible for an engaged human being to not care with the outcome of events. Everybody cares. I mean, that spends time in this business, that endeavors to become informed.

Everybody has a desired outcome.

The challenge for journalism is not total objectivity. It’s honesty. Some might say “fairness.” Journalists love to say, “Yes, we might be biased, but we’re fair.” No, you’re not fair because you’re not honest. The key to journalism is honesty, and the willingness to report and cover things that are gonna result in an outcome we don’t agree with. That’s why I love this analogy that they’re actually salespeople, they’re advocates. I think that’s a great way of putting it. “CNN’s Christiane Amanpour, International Sales Rep for CNN,” because that’s exactly what she’s doing.