RUSH: Perry, Florida. This is Michael. Thank you for waiting, sir, and welcome to the program.

CALLER: Thanks, Rush. First-time caller, longtime listener. I just want to give you a quick bio on me real fast. I spent the last eight years of my military career assigned to Headquarters Central Command in Tampa. I worked directly in the J5 Plans and Policy Directorate. Politically I am a registered Republican, vote Republican, but I’m mostly constitutional conservative.

Part of my job in my work at CENTCOM was dealing with the troop forces and troop levels in Afghanistan and Iraq. As much as it pains me to sound like I’m gonna support Obama, because I am not an Obama supporter, the fact of the matter is all the troop levels that you are talking about and hearing in the news from all the generals — that we needed to leave 10, 15, 20, 25, 30,000 troops on the ground in Iraq to stabilize it — are all true.

The other part of that is that after the Iraqi government became an officially constituted government, our mandates underneath the UN resolutions expired. So we couldn’t arbitrarily just leave troops there without the approval of the al-Maliki government. Now, rightly or wrongly, the current administration decided, you know, we’re not gonna give any more concessions on the status-of-forces agreement.

I can tell you that we offered incentives to Maliki to get him to leave groups on the ground he refused to sign it to the point where the current administration said we have no more to give and we had to back out of negotiations. And it really bothers me, you know, that I have to sound like I’m coming to the defense of this administration, but that was the truth on the ground there. 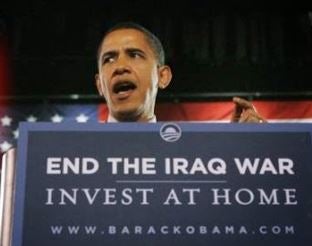 The New York Times said the exact opposite of what you said here, that al-Maliki offered… I mean, we’re in there now. They must have some immunity now, and the New York Times said we had the same opportunity then and that Obama turned Maliki down because he wanted to come home from Iraq. It was the parliament, not just Maliki.

CALLER: Well, and I can’t talk to what was being offered now because I retired in 2010, but I do know that on the ground there at that time… Now, I wasn’t in the room directly for negotiations with the ambassador. But a very dear, good friend of mine was, and the fact was that basically no matter what we offered for concessions, al-Maliki refused. Now, that’s all I can address on this thing is what we are offering. Now, could the Obama administration have offered more concessions and more incentives? I don’t know. That’s a political decision.

RUSH: Well, let me read to you what the New York Times says.

RUSH: This is back in June 23rd of this year, 2014. Quote: “Diplomatic note promises immunity from Iraqi law for US advisory troops.” That’s current. The article says the Regime, “The Obama administration said on Monday that it has accepted from the Iraqi government the same sort of immunity agreement for newly dispatched special operation troops that it refused to accept in 2011 when it opted to withdraw all American troops from Iraq rather than keep a residual force behind.” This is Obama’s house organ which is saying that he was offered by al-Maliki the same immunity we’ve got now back before he pulled out.

RUSH: Now, that’s at great conflict with what you’re telling us.

CALLER: Well, and I can’t address what was actually offered in 2011 because I retired at the end of 2010, but I can tell you up to that point, everything that we had offered to them and tried to do to them to encourage them to let us leave forces on the ground, al-Maliki flat refused. Again, could this administration have done more? I don’t know. That’s a political issue as far as —

RUSH: Well, that’s an important question. How bad did Obama want to try, because apparently after you left in 2011 al-Maliki went for it. Now, here’s the money quote from this piece: “The Obama administration said on Monday that it has accepted from the Iraqi government the same sort of immunity agreement for newly dispatched Special Operations troops that it refused to accept in 2011, when it opted to withdraw all American troops from Iraq rather than keep a residual force behind. … In effect, the diplomatic note Mr. Obama has now accepted is the equivalent of what Mr. Maliki offered in 2011 and was rejected by the Obama administration…”

CALLER: Again, I can’t address what happened in 2011. I can address what was going on up until I retired. As I say, the political decision on this thing, a mil-to-mil negotiation on a status-of-forces agreement is a two-track road. It’s the military saying, “Here’s what we want to have on the ground. Here’s what we want to cap for our troop levels, and here’s what we want to have for equipment and our movements, and here’s how we’re gonna move our troops around when we exercise,” and things like that. The political side of it is the monetary, “Okay, here’s much we’re gonna spend, how much we’re gonna put in the bases, and our legal protections if a US military guy does something wrong.”

RUSH: That’s the biggie. The legal protections are the biggie. You don’t want our troops subject to Sharia law or the International Criminal Court or charged with committing war crimes in the normal conduct of your duties.

CALLER: Absolutely. You know, again, as much as it pains me to say, I kind of support us getting out of there from a political standpoint. It really wouldn’t have been a good thing to leave any level of troop, combat force in Iraq running around doing combat operations without any protection from Sharia law or Iraqi law.

RUSH: Well, we’re going back and forth because you’re saying 2010. The New York Times is making it clear that one year later it was offered and it was turned down. Which leads to, you know, you talk about the politics of it. There’s not very much doubt that Obama didn’t want to hang around there anyway. He had made this promise that was directly correlated to his election and donations from political supporters to get the hell out of there because for five years the people of this country have been told what a worthless operation it was, how senseless it was, how insane it was. Bush was an irresponsible cowboy, should have never been. Obama said I’m smarter, I’m better, I’m gonna get us all out. And he did.

I remember the thinking at the time was that Obama really didn’t want it or he could have gotten it if he did because we had just saved their bacon. Bad choice of words. We had just saved ’em. We had just performed a great service for them, and we could have had what we wanted, but he didn’t want to stay in the first place. That’s the political side. I understand your familiarity with that is not as much as on the other aspects. I appreciate the call. This is all very useful and interesting. But we have it today, and it was offered three years ago. So if we’ve got it, if we have the deal that we wanted and demanded, the idea that we couldn’t have had it earlier kind of stretches credulity.

RUSH: You know, we just got a status of forces agreement with Afghanistan with no problem, and look, the reality of the situation is, after five years, this stuff matters. After five years, Obama and the Democrat Party every day, 24/7, ripping the entire Iraq war to pieces and telling everybody in this country how unjust, unnecessary, and all of that that it was. The daily body counts of American casualties and all the things our troops were supposedly doing, the atrocities they were committing. They drove the Democrat base literally insane with hatred over Iraq.

There’s no way Obama is gonna keep 10,000 or 20,000 troops there when he pulls out. There is no way. His deranged base would not tolerate it. He had to get clean out of there, and then he had to brag about getting clean out of there. And the reason, the excuse he gave for turning down al-Maliki’s deal on the status of forces agreement, Obama’s excuse was that he didn’t want to bypass Iraq’s parliament.

The New York Times tells us that Maliki offered it personally as the leader of the country, offered the immunity from prosecution under Sharia law or any other law in Iraq, our troops would be immune. But Obama said, “You know, I don’t want to bypass the Iraqi Congress or their parliament. I don’t want to violate their constitution.” He didn’t want the deal to be based on an al-Maliki executive order. Isn’t that rich? He couldn’t bypass the Iraqi parliament with an al-Maliki executive order because he didn’t want to disrespect the Iraqi parliament. Isn’t irony ironic? (laughing) Because he can’t wait to ignore or disrespect the United States Congress.