Will Things Change if Ebola Gets to DC?

RUSH: If you are just joining the program, or if you were with us for the entire first hour, I want to replay a clip just one more time to set the stage for everything that will follow, because it is sort of like the foundation of today’s program. That is Ebola and what, if anything, is being done to stop it from spreading in the United States. We have come to find out that some people think, “Well, that’s shouldn’t be the focus.”

Let me review for a summary here for you of things that might help you to understand. You’re not gonna agree with any of it, but to help you to understand. I think to accept this, let me remind you what the director, the recently resigned director of the Secret Service said when requiring agents to tear down arrangements they had put in place for the African Leaders Summit in Washington a few weeks ago.

The Secret Service is there to provide life-saving security for the president and others in his orbit who are coming for official meetings or what have. They’re not there to be part of any welcoming committee. They are not there to set up the reception lines or to provide the refreshments or the punchbowl or any of that.

That’s not their job, and yet the director of the Secret Service said, “We need to be more welcoming, given our past. We need to be more like Disneyland.” Okay, so let’s now go to audio sound bite number one. Again, this is the author, David Quammen, who has written a book, Ebola: The Natural and Human History of a Deadly Virus.

He’s on with Anderson Cooper last night. Anderson Cooper is saying, “Look, all these people saying we need to ban flights from Africa. We can’t do that. There aren’t any direct flights. There are circuitous routes, there’s no way, we can’t really do it, right, David?” 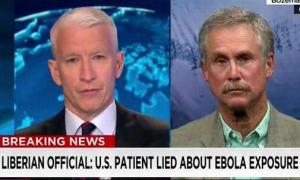 QUAMMEN: You can’t isolate neighborhoods; you can’t isolate nations. It doesn’t work. And people talk about, “Well, we shouldn’t allow any flights from Liberia.” I mean, we in America, how dare we turn our backs on Liberia? Given the fact that this is a country that was founded in the 1820s, 1830s because of American slavery, we have a responsibility to stay connected with them and help them see this through.

RUSH: So you see? It’s our fault. We share culpability. The responsibility falls on us. We are responsibility for there even being a Liberia. We are responsible for people who live there because they once were slaves here and they had to flee because it was so bad, and they sent them to Liberia where they founded a country, and look what’s happened now! Because of slavery, they have Ebola.

We can’t turn our backs on it.

We owe it to them to get it ourselves.

We’ve got to let them in here.

We kicked ’em out.

See, we had slaves here!

It does not mitigate the fact that we did it, and even though we ended it, that doesn’t mean we’ve paid a fair price for what we did. So we can’t shut down flights from Liberia. In fact, we should put up a welcome center like they do at Disneyland for flights from Liberia, because we owe it to them. We need to stay connected. We can’t turn our backs on them.

We need welcome centers and kiosks at major airports welcoming people from Liberia, on immigration. We need to welcome these people because we’re rich and they’re not. They could have been but we kicked ’em out way back a long time ago. They’re poor because of us, they don’t have anything because of us because we’ve stolen all the world’s resources, and they once lived here where they could have owned and had things here.

But we kicked ’em out, we beat them in wars, they ran but they want it back, and we should let them have some because we were mean, and it wasn’t fair, we had no right. Besides, the economic system we set up, capitalism? That’s unfair. Only 5% do well, 95% suffer. We’ve gotta fix that, and so we’ve gotta… We’re just bad! We’re guilty, and this country has committed so many atrocities.

We’ve done so many bad things to so many people that we don’t have a prayer of even paying it back unless a lot of years go by where we take corrective measures. We owe so many people so much! We have to give back so much of what we’ve stolen. We need to welcome all of these people who are living lives of doom because of us, because it is our fault. Just like with Disney.

You know, you can apply for refugee status online now, just like you can get a ticket for Disney only. You get parking passes before you get there, you get your boarding pass before you get on the airplane, you get your refugee status, and you show up at the illegal immigrant welcome center. We’ll send you an American family that doesn’t know you’re coming and we’ll set up a special classroom in school for you.

All because we owe you!

All because we are such big, rotten SOBs!

We’re bastards! We’re creeps! We’re the meanest SOBs that have ever walked the earth, and it’s time we paid it all back.

If that means some of us get Ebola, well, deal with it, creep!

Now, Ebola, we will have to wait and see, because things changed at the Secret Service when the jumper actually got into the White House. Things might change if Ebola gets to Washington, see? There is a suspected case now being treated at Howard University. But until that’s confirmed, we should welcome people from Liberia who might be affected. We’re not gonna be as callous as the president of Liberia. 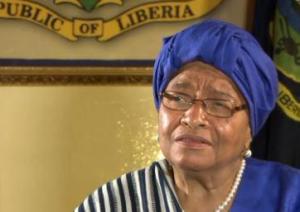 Oh, you didn’t hear that? Oh. Well, while David Quammen thinks that we owe it to these people to let them in, listen here to Ellen Johnson Sirleaf, who’s the president of Liberia, and she was asked about the Dallas Ebola patient, Thomas Duncan, from her country who got on a plane knowing he was sick.

SIRLEAF: My first concern was, “Why did he do this?” The fact that he knew when he left the country is unpardonable.

RUSH: Really? So the man’s own president thinks that what he did is “unpardonable.” It’s unforgivable. How dare he take action that would knowingly put people at risk? In her mind he was being very selfishness, but in David Quammen’s mind and in the politically correct mind (and that means most of the leaders of this country), “Why, we shouldn’t stop at this guy.

If there’s anybody at Liberia wants to get here, bring ’em on in with a welcome, sir, here! It’s our fault. We are at the root of this because of our slavery. I know you’re probably saying, “Come on, Rush, you’re be exaggerating here to make a point.” Maybe a little, but not much, folks. I’m telling you, don’t doubt me on this.