Caller: Obamacare Was Designed to Fail

RUSH: Here is Bob in Bloomington, Indiana. Welcome, sir. Great to have you on the EIB Network. Hello.

CALLER: Thanks for having me, Rush. Thanks for your great work in preserving our republic, and I miss David Brinkley, too.

CALLER: I’ve known President Obama has been a fraud since 2004 and 2009. I read the ACA. It was poorly written, and it was going to fail, and it was designed to fail. I’m a CPA, and I read it. I understood it, and this is what it’s done to my family. We had a qualified plan. It fit the law. We were taking less out of the company than our premiums were putting in. But the company could not make it, so they terminated everybody’s plan.

My wife and my two six-year-old twins are now going to be uninsured. We’re looking into the marketplace, and it is now apparent that our premiums are gonna go up 2.5 fold. Our deductibles are gonna go up 2.5 fold. I highly resent the government interfering with my ability to create a private contract. If you look at the current numbers, 54% of the American population wants this law repealed, and this is easy to do. It can be done.

The employer mandate is about to kick in, which had a one-year reprieve, and when it kicks in we’re going to have total revulsion to this law. We could do this if we still had a Republican Party. The reason why nine out of 10 people are mistrustful of government and it doesn’t accrue deleterious effects to the Democrats, is the American people no longer see a great difference between Democrats and Republicans. We have angst, anger, and economic hardship coming as a result of this law.

If Reince Priebus and others would get off their duff and clearly outline what’s wrong with this, we could achieve a veto-proof Congress.

CALLER: Well, you know, Rush? It should be ’cause it’s bad law. We have 291 people that could be elected to Congress, and that’s likely. That could happen. It’s not very likely we’ll have 67 Republican senators, but we could create a coerced coalition. How would you like to be one of three Democrat senators who get a very unpopular law still in force? It could be done. We could corner these people and get this law repealed.

Obamacare is not a legacy, it is an albatross, and we need to be up front about it.

Ronald Reagan had a head-on attack approach when he said, “Government isn’t the solution, it’s the problem,” and this still resonates if we want to be free. McCain and the other Republican bigwigs are clearly out of touch because the media is the enemy. When I was nine years old, I heard CBS say horrible things about Goldwater, and it was at that moment I knew that they were in the business to filter the news, not present it. By courting media —

RUSH: Bob, you said something at the very beginning of your call that the Affordable Care Act, you read it, and that it was “designed to fail.” What do you mean by that?

RUSH: Oh! Oh, oh, oh, okay. Granted. So it’s designed to wipe out the private-sector insurance business and then there’s only one option left: The government.

RUSH: The government comes in as the savior, to protect you and save you from these vultures out there raising your premiums and so forth.

CALLER: Well, Rush, we all know that from ’64 to ’74 we had 50% general rate of inflation but medical costs went up 400%, and it was the direct result from the implementation of Medicare. It was an unlimited bucket of money following a finite amount of goods and services that drove the price up. Every time you have a third-party payer system in place where the person is taken out of the loop that’s receiving the service, no one cares for value anymore, and it deteriorates, and it’s gonna get worse until we have rationing of health care.

CALLER: Yeah, it’s coming. You might as well get ready for it. Where I left off in my mental diatribe is when I was nine, I heard CBS say awful things about Goldwater, and that’s when I understood they were in the business of filtering news, not presenting it. That means, then, that having Republicans court the media means they must adopt some of the media’s views which turns Republicans into slow-motion Democrats.

Now, we’ve got a failed Obamacare and a failed economy with cooked numbers. We won the war in Iraq, and President Obama surrendered it, and our republic is now in the balance. Two more generations of federal interference and education and in local issues, we’re lost forever. I’m looking right now at a letter that my dad wrote from the front lines in France in World War II, and I think about him being in the 242nd Field Artillery Battalion attached to Patton’s 3rd Army.

Firing 7,000 rounds of howitzer ammunition with his head bouncing off the ground trying to sleep at night on the frozen ground, trying to save our republic — and here we are throwing our freedom away with both hands as fast as we possibly can. My six-year-old twins have grandfathers on both sides of their family that were in that war, and I was hoping to bequeath them something better. And you know what? I have my doubts that I’m gonna be able to pull that off with this hideous embrace of Big Government that we have and the termination of my individual prerogative.

RUSH: Well, you’re not judged competent, Bob, to make the right choices. Maybe you will for you, but it will leave other people out in the cold, because, you see, when people decide for themselves, that’s selfishness, and you are not caring enough about your neighbor. So Obama needs to step in and make sure that your selfishness is compensated for out of your pocket.

CALLER: Well, I know that the government built roads, but they’ve got roads in North Korea, and they’re not doing very well, either. It is private enterprise. This isn’t a “capitalist” country, ’cause that was a pejorative created by Marx. This is a private enterprise. That’s what made this country the powerhouse of this planet.

CALLER: Are you off your rocker? If I hadn’t made the money to build the roads there wouldn’t be any roads.

RUSH: (laughing) Nah, I’m just trying to stoke you here ’cause you’re on a roll and I want you to keep going. Imagine this, Bob. Imagine how much more money we would have… Real money! We don’t have any money anymore. We’re $17 trillion in debt. We don’t have a dime. In the real world, we don’t have any money. But imagine how much more we would have to spend on vaccine research or development to deal with Ebola if the government wasn’t taxing and regulating private enterprise so severely. Imagine all that money Obama’s thrown down the drain on solar and wind and green crap and global warming. Imagine if we had that money to spend on research and development in the medical field.

CALLER: Medical and any other factory or implementation. We could create real jobs instead of part-time, burger-flipping jobs that are counted as full employment under these cooked numbers that we’re looking at. It is a sorry excuse for an economy that we have right now, and it is on life support because we have effective 0% interest rates. And the only “metric,” to use the president’s term, that is favorable — the stock market — is being propped up by the fact that nobody can make any money in CDs or debt. 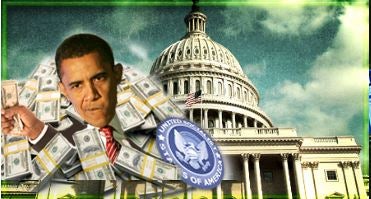 CALLER: You can only make money in the stock market, and once the interest rates come up — and that’s inevitable — that will fall.

RUSH: He decimated the bond market. Once you take the bonds out of things, all you can do is spend money in the stock market. Plus what the Fed had been printing and then allocating to the stock market on top of all that.

RUSH: I know it is. But they’re telling us, “Hey, the economy’s roaring!” Obama’s out making speeches, “The economy is really roaring, you just don’t know it.” We got 5.9% unemployment, and we’re rolling in good times. It’s just people aren’t feeling it, and Obama is gonna go out and with the power of speeches make people feel how great this economy and this country is just rolling right along.

CALLER: All that is hot air. I don’t care about hot air. As an accountant, I want results, and we’re not getting it. My little kids look up to me for guidance and future and hope and direction, and right now I’m kind of befuddled as to what to tell them.

RUSH: I know, because you want to be honest with them.

CALLER: I have to be honest with them. I can’t lie to my own kids.

RUSH: And how do you avoid scaring them?

CALLER: It’s impossible. The only thing I can do is have them live on their faith and understand that, in the long run, they’re gonna be all right. But in the short run we could lose our republic.

RUSH: That’s a genuine fear. By lose the republic, he means lose our freedom, our self-determination, our right to self-determination, and more. Bob, it’s great. I’m sure you got people standing and cheering out there. I am thankful you called, and I appreciate your holding through the break at the bottom of the hour. That’s Bob in Bloomington, Indiana. Thank you again for the call.