RUSH: I predicted to you a long time ago. Leon Panetta’s book came out that it was the beginning of the transition from the Democrat establishment moving from Obama to Hillary. And now Panetta and his book are really unloading on Obama so much so that Dana Milbank and the Washington Post is very concerned about the disloyalty. The thing about the Dana Milbank piece is that while he berates Panetta, he repeats everything Panetta says. So it’s a double hatchet job, Panetta and Milbank, with Milbank defending Obama ostensibly while attacking Panetta.

RUSH: Now, I mentioned, ladies and gentlemen, earlier in the program that Leon Panetta — I want to get to this ’cause I mentioned it, I teased at the top, and I want to not have the program end without mentioning this. It didn’t take long, Panetta’s got a book out and in the book he’s savaging Obama, savaging him, and it’s all part of building up the Hillary Clinton in 2016 meme, if you will. And Bill Clinton’s on the campaign trail now. He’s down in Arkansas and he’s campaigning.

A lot of people are quoting what Panetta said, Dana Milbank in the Washington Post today has a piece. What it purports to do is criticize Panetta for daring to be so disloyal to Obama, but yet it repeats every Panetta criticism. I mean, it’s a pile-on piece. I don’t know whether Milbank intended this or not. But it’s dump on Obama time now.

Let’s start with audio sound bite number two. This is Bill Clinton. Now, to set this up, way back in August, back on the 27th, is when I first intensely and with a focused message started talking about the Republicans’ absence of a message in this campaign, about how they’re keeping quiet. They see that there’s a potential wave election for them, and a lot of people are down on Obama, down on the Democrats, and their strategy’s shut up and not interrupt that and let that happen.

In the process what happens is that the Democrats once again are given a free rein to define the Republicans. I mean, in politics it’s a truism, if you’re not going to define yourself, your enemy will, and that’s how you end up with a War on Women. That’s how you end up with Republicans are racist, sexist, bigot, homophobes. If you refuse to define yourself — and there’s any number of ways to do it: your policy message or your agenda portfolio, whatever, if you refuse to do it, you leave yourself wide open.

And it was back in August that I first began to get nervous about this Republican silence about what they stand for and about how things will be different and better if they win. There hasn’t been any of that. I chronicled the differences between today and 1994. When the Republicans took the House in 1994 it came out of the blue and surprised everybody. They did it. They had a Contract with America. They had a specific agenda. They told the American people what they were gonna do. “Here’s what we’re gonna do when we get elected. Here’s what changes we’re gonna make. This is how things are gonna get better.”

It was effective and it won. It was a factor in their winning. The mistake they made then was, after that election they assumed the country had transformed itself to majority conservative, and they stopped teaching, they stopped explaining what they were doing. They just started implementing things left and right, and people got scared, said, “What is this?” They had just voted against Democrats, and the contract was the contract, but as it was implemented there wasn’t sufficient explanation, quote, teaching.

Well, because there’s no national message now from the Republicans, it allows people like Bill Clinton to go down to Arkansas and tell people what the Republican message is.

CLINTON: They’re really running against the president, aren’t they? They see these polls. The president’s unpopular in Arkansas, and, yeah, the economy’s coming back, but nobody believes it yet ’cause you don’t feel it. (banging podium) You cannot afford to do what their opponents want. They want you to make this a protest vote. “You know what you gotta do? You gotta vote against the president! After all, it’s your last shot.” It’s a pretty good scam, isn’t it? “Give me a six-year job for a two-year protest.” That’s Mark Pryor’s opponent’s message.

RUSH: All right, that’s Clinton now attempting to save Pryor and his campaign by defining what the Republicans stand for and what they really want, and he even got in a shot there on Obama about the economy. He’s mocking Obama. Obama’s said the economy’s going great guns, it’s just nobody knows it. You don’t feel it yet. Clinton got even a little shot in on that. Now, Clinton being back has excited the Drive-Bys. CNN today. This is John King speaking with the political columnist Ron Fournier.

FOURNIER: Covering him for as long as I have, it’s like I got paid for an advanced degree in politics. He’s the best. You see what he did yesterday. He did a typical Clinton. He took the best argument, the best argument that the Republicans have against voting for Democrats, and he slowly took it apart. He’s the master!

KING: Let’s show some of the pictures as we go through this. Here’s Bill Clinton on the rope line. He’s taking selfies with people as he goes through. Uh, he came to age, remember, in the pre-Internet days. I don’t know what it would have been like to have Twitter and Facebook and all this when Bill Clinton was governor and then president. I shudder to think about it.

RUSH: Oh, you shudder in excitement. “Oh, my God, can you imagine what the brilliant genius Clinton would have done with Twitter and Facebook? Oh, wow! Can you imagine how many Lewinskys there would have been with Twitter and Facebook? Oh, my God, it would have been nirvana.” They can’t contain themselves. Now, what did Clinton actually say that was so brilliant? Well, let me read it to you again. (impression)

“They’re really running against the president, aren’t they? They see these polls. The president’s unpopular in Arkansas, and, yeah, the economy’s coming back, but nobody believes it yet ’cause you don’t feel it.” Obama said that, not the Republicans. “You cannot afford to do what their opponents want. They want you to make this a protest vote. ‘You know what you gotta do? You gotta vote against the president!

“After all, it’s your last shot.’ It’s pretty good scam, isn’t it? ‘Give me a six-year job for a two-year protest.’ That’s Mark Pryor’s opponent’s message.” It sounds like gobbledygook to me. I mean, I don’t see the brilliance in it, but it doesn’t have to be. Clinton’s on the campaign trail, and this is a sign — this media orgasming over Clinton back down in Arkansas. This is a sign of just how bad it is for Obama in the Drive-Bys.

Clinton doesn’t even have to make any sense.

All he’s gotta do is go out there and speak with his raspy voice and smile and assume to be speaking against Republicans, and they love him. 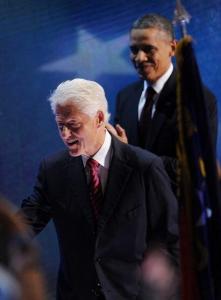 RUSH: Now, let’s not forget what a genius Bill Clinton is. A guy who had never run for anything but the Senate one time, came along and wiped the floor with Bill and Hillary Clinton. His name was Barack Hussein Obama, Mmm! Mmm! Mmm! A newbie, a rookie! A rookie wiped the floor with the brilliant geniuses Bill and Hillary Clinton in 2008, and even got away with throwing the race card down on Clinton.

For the first time in his career, Clinton’s running around on the defensive on being a racist, and he should have ’cause he said to Ted Kennedy one day, “Hey, you know, Ted, it wasn’t all that long ago this clown would have been getting us our coffee.” He said that. Obama heard about it, threw down the race card, and Clinton got offended. But Clinton and Hillary got snookered.

Hillary would have been out even sooner if it hadn’t been for us here in Operation Chaos. Yeah, big genius Bill Clinton. Now, another question I got. “How does Panetta ripping Obama help Hillary?” Well, if you put it that way, the two don’t naturally go together, but Panetta’s book lays the blame for foreign policy on Obama, and he was in the Regime. Panetta was there. He’s not an outsider.

Panetta was CIA. Whatever else he was, he was in the Obama administration. He’s got a book dumping on Obama in terms of foreign policy. That is an attempt to inoculate Hillary for any charge of incompetence in the 2016 campaign about Benghazi and other things. I’m not saying it’s gonna work, but that’s what they’re trying. (interruption) Well, Mr. Newt and the Republicans and the Contract beat Bill Clinton in 1994.

The genius Bill Clinton. (interruption) Yeah, but… (chuckles) “It’s so great to have the guy back! Oh, my God, you know, I’m …” Ron Fournier. I’m sorry. “I’m just… I’m having the greatest time, here! I got Clinton back! Oh, this so wonderful! It’s like a college degree to watch Bill Clinton,” and I still don’t know what he said. I read that transcript again.

I know what he’s trying to say.