RUSH: The White House has been demonstrated to have lied again on this Secret Service prostitute thing that happened down in Cartagena.

It turns out the White House was in on it. The guy that actually ran the show down there, some 25-year-old kid, is now running women’s issues for John Kerry at the State Department. He’s the guy that hired the prostitutes for the Secret Service. The White House was fully aware of it, covered it up, and asked people to stand mute on it again until after an election.

Here’s another instance where the Regime has bottled up, covered up, silenced critical information before an election. You ought to see the Drive-Bys today on this story. The Drive-Bys are wringing their hands over this. The Washington Post is the source for this. This is a huge, I mean, by their standards, this is a very long story. The Drive-Bys are acting outraged that the Regime would keep this news from them. What do you mean, keep this news? You guys participate in these cover-ups.

You know, that’s the thing about this. The Drive-Bys, they save all the good stuff for their books after the election or they suppress the information so it doesn’t hurt Obama before the election. Then when the news comes out how everybody suppressed the story, then the Drive-Bys start talking about how the White House kept them in the dark about things. The White House didn’t keep ’em in the dark. They didn’t want to know. And to the extent that they found out, they participated in suppressing it, because that’s been the name of the game. Whatever the story, it is viewed through the prism of does it hurt or help Obama.

RUSH: Now, I mentioned the Secret Service scandal in Cartagena at the top of the busy broadcast today. It turns out we were lied to again by the Regime and by the media, who repeated the lies of the Regime. The media is trying to act today like they’re outraged, like they are outraged how they were kept in the dark, which just amazes me. What’s their job? To ferret out the truth!

So the Washington Post today has a very long story — for them, by their standards. I mean, it’s thousands of words. So let me nutshell it for you. Let me sum it up for you. The Washington Post, through diligent journalistic efforts (otherwise known as hard work) has uncovered evidence that the White House knew about the Secret Service’s prostitution scandal in Cartagena, Colombia.

Now, this happened back in 2011. The White House knew about this, despite the White House claims to the contrary at the time. Old Jay Carney, the spokeskid, clearly went out there and told a whopper about it. (shuffling papers) I’m looking at the sound bite roster. I thought we had it. It doesn’t matter. Everybody remembers Jay Carney went out and totally denied it at the White House. They were as shocked by it as anybody else.

It turns out they knew.

That’s the whole point of the Washington Post story. In fact, the Washington Post says that the lead investigator for the Department of Homeland Security’s Inspector General’s Office, David Nieland, told Senate staffers he was pressured by the White House “to delay the report of the investigation until after the 2012 election.” That’s exactly what’s going on now: Suppressing of events and stories, not reporting.

It is unbelievable. It looks like the stuff that egg cartons are made out of. It’s a tray. In the upper left hand little section is dry, shredded lettuce, and then there looks like a single carrot in another section and a little like a cup of fat-free or skim milk. There’s no entree. Students are outraged, parents are outraged — and, of course, it’s always been the Republicans starving our children.

Anyway schools are rejecting it all over the country now. Everybody is. But, anyway, the guy who helped her on implementing this is the father of the 25-year-old guy at the center of the prostitution charge. Now, get this. Jonathan Dach is now working for the Regime and John Kerry (who, by the way, served in Vietnam, if you didn’t know) over at the State Department. Jonathan is a policy advisor in the — wait for it — Office on Global Women’s Issues.

The guy that hired the prostitute for the Secret Service in Cartagena is now working for Kerry as a policy advisor in the Office on Global Women’s Issues. So a kid, a young man who is accused of using prostitutes, is advising the State Department on women’s issues. You talk about War on Women? (snorts) The headline the Washington Post story, “Aides Knew of Possible White House Link to Cartagena, Colombia, Prostitution Scandal.”

Here’s Jason Chaffetz on Fox & Friends this morning, asked by Elisabeth Hasselbeck, “What do you have to say about it, Congressman?”

CHAFFETZ: The White House needs to come clean. There’s a White House staffer that was very involved in this. Remember, there were nearly two dozen Secret Service and military personnel that were either fired or reprimanded, but the concern is that when it came to the White House and the White House taking care of its own personnel, a totally different standard and perhaps a misdirection and some cover-up to make sure that that story never saw the light of day before the 2012 election.

RUSH: Exactly. Exactly. And then Steve Doocy said, “We should also point out that this fellow, the volunteer, Jonathan Dach, who allegedly, according to The Washington Post, hired the hooker. His father, a big donor for Barack Obama. But I’m sure that’s just a coincidence, Congressman?”

CHAFFETZ: Now he’s working on global women’s issues, the Office of Global Women’s Issues at the State Department. It really is offensive to the morale of the Secret Service, the men and women who served. They got reprimanded. They got fired. You had three people in the inspector general’s office there in the Department of Homeland Security who were put on administrative leave because they were asking questions and wondering why, why aren’t we including this information about a White House staffer involved in this prostitution problem?

RUSH: In the big scheme of things, Ebola, ISIS, I’m sure it’s chump change. Prostitutes? Come on, everybody does it. Did it get in the way of doing their jobs? Who knows. Maybe it is their jobs, screwing people. Anyway, the reason it’s not jump change is it illustrates a day-to-day philosophy pattern by the White House, that is lie, cover up, keep the news away. It also illustrates the media slavishly did so. What good is it now knowing? It’s like these journalists saving up all the really juicy stuff for the book after the election, rather than use it during the campaign. 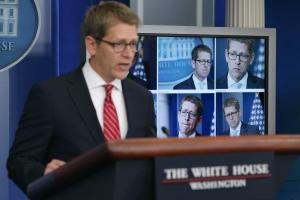 Now, here’s the Jay Carney bite that I referenced early. I couldn’t find it ’cause it’s in the section where I have Ebola sound bites, and it’s a stand alone on that page, but this was April 23rd, 2012, daily press briefing, and this is what the spokeskid said about the Secret Service prostitution scandal.

CARNEY: There are no, to my knowledge, and have been no credible or specific allegations of misconduct by any member of the White House advance team or White House staff. But out of due diligence this review is conducted, and there is no indication of any misconduct.

RUSH: Yeah, well, another lie, blatant, vehemently lied that the White House staff were involved. Big deal. He’s not there anymore. I don’t know where he went. Some news network. Incestuous revolving door. But another classic example of what you get with this kind of Regime and this kind of political ideology that just cannot be honest about itself.