Ronald Brownstein: If Obama’s Not Popular, Then Popularity Isn’t Possible

RUSH: I wasn’t gonna play sound bite number one ’cause it doesn’t matter to anything, but I think I’m going to because I just found a way to make it matter to something. Ronald Brownstein, our old buddy at the Los Angeles Times, he’s now at the National Journal, he was on CNN’s Newsroom this morning, speaking with Don Lemon.

They took time out from that today, interviewed Ronald Brownstein, a couple of other people, about Gwyneth Paltrow, who hosted a fundraiser for Obama yesterday in her backyard in Brentwood. Apparently, she was so overcome with Obama’s beauty that she couldn’t speak. And she said so. When it was time to introduce Obama, she just abruptly says, “You’re so handsome that I can’t speak properly” and turned the microphone over to Obama.

Prior to that she said, “It would be wonderful if we were able to give this man all of the power that he needs to pass the things that he needs to pass.” And I think it was okay when Gwyneth ran out of words because of Obama’s beauty because she’d proved she was a moron by then. It wasn’t necessary to say anything else.

“It would be wonderful if we were able to give this man all of the power that he needs to pass the things that he needs to pass.” If he had all that power, there would not be anything passed. There would not be anything voted on if he had all that kind of power. What do we want to turn this place into, North Korea? Maybe that’s a bad choice of countries right now.

Anyway, Ronald Brownstein, because of this, had an enlightened moment in which he made the claim that we can no longer judge presidents on popularity or approval. And you know why? Because no president can be popular in America anymore. This is the same thing they always do. When a Democrat president is failing, I don’t care whether it’s Clinton down in the polls or Hillary or whoever, they always say, “Well, you know, if this guy can’t be popular, then nobody can. Then the institution’s trashed. If Obama can’t be popular, then this country’s not worth it anyway.” It can never be the fault of the Democrat who’s lost popularity. If a Democrat isn’t popular, it just means popularity is not possible. 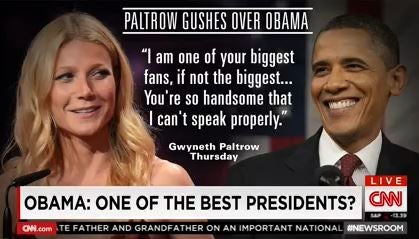 BROWNSTEIN: Our country is so polarized now, so much of the country is locked down firmly for one side or the other, it just simply may not be possible to be, in effect, more than president of half of America. That, you know, the best a president can do is have a little more than half of the country with him at his high point. Approval ratings don’t mean what they used to because presidents can’t get as high as say, Eisenhower or Kennedy or even Reagan got. It’s just not in the cards anymore. Gwyneth Paltrow may love you, but in Mississippi and Alabama and Texas, you are not exactly a hero. That is the reality we live in. That is the reality presidents are operating in and I think it does change the standard by which we measure their political success.

RUSH: See how this works? If Obama can’t pull off popularity, why, then popularity’s not possible anymore. The last guy maybe was Reagan. Now, for those of you that were not old enough to be paying close attention, for those of you that were not alive back then, you’re gonna have to trust me when I tell you, Reagan was despised by the media back then. But Reagan had an engaging personality. He was able to overcome that. The media was not able to define Reagan because Reagan had a way to go right to the American people without being filtered by them. He just had that knack. Not everybody does.

The country was just as polarized. I mean, coming off of Jimmy Carter. But more importantly than that, there was hatred all over the place for Ronald Reagan, from the media, from the Democrats in Congress. It was no different than what’s out there today against George W. Bush. Everybody tends to think that things, whatever they are, at the time they are alive or at the time they are paying attention are worse than ever. And sometimes that’s true. But in this case, what’s happening here is that Obama has been exposed as a phony. He’s not The Messiah. He’s not the way he presented himself in 2008 and 2009, and he’s not the way the media presented him. He’s simply caught up here in a dose of reality.

And notice also the states that Brownstein points out, which is axiomatic for the media. Mississippi, Alabama, Texas. Let’s not forget Kentucky, where Alison whatever her name is, wouldn’t even admit to voting for Obama. Grimes, I know. I can’t remember her middle name. Alison Lundergan Grimes refusing to say whether she voted for President Obama in an editorial meeting with the Louisville Courier-Journal.

Democrats in the northern states are not happy with Obama. There’s a bunch of Democrats in the northern states that don’t want Obama anywhere near their campaigns, a lot of them up north, and a lot of them out west. But you see how this works. Yeah, it’s just not possible, I guess, for presidents to be popular ’cause the country’s so divided. The country was divided in 1980. That’s what was remarkable about Reagan. If you wonder why people continue to cite Reagan, Reagan was able to unite the country. You ever heard of the Reagan Democrats?

It was the exact opposite of that. Reagan engendered love for this country and respect for it and so forth. And it could happen today, too, with the same kind of leader. That’s all we’re missing is that kind of leadership. It certainly is possible for a president to be popular. Obama was. Is Brownstein saying that the approval numbers Obama had in 2009 and 2010, are they just irrelevant now? Do they not mean anything? Obama was at 65, 70%. Was it not real then?

Or did the country just change on a dime? Why did Obama lose his popularity? Is the country too partisan? Or maybe did Obama have something to do with it, Ronald? And over here you got Gwyneth Paltrow. “It would be wonderful if we were able to give this man all the power that he needs to pass the things that he needs to pass.” He’s got it, and he’s been doing it, Gwyneth. It’s called executive orders. Anyway, I used to laugh at the morons. Now they worry me. Being honest. I used to laugh. And I still laugh at ’em, but now they worry me, ’cause they’re everywhere. The morons and the dip excrements and everything, we’re just surrounded by these idiots.

RUSH: So, according to Ronald Brownstein at the National Journal, it’s just not possible for presidents to get high approval numbers or be popular anymore. I wonder if that’ll apply to Hillary Clinton once she gets revved up. Will we hear how popular Mrs. Clinton is? Will we hear about how the first female, first potential female president is revolutionizing politics?

Is it gonna be a replay of 2008 all over again, and are we gonna hear how universally loved and overwhelmingly popular she is, in defiance of Brownstein today saying it’s not possible anymore? Because, you see, my friends, the way this works is it will be possible for the next Democrat nominee to be popular, yes! And to have high approval, yes! It will happen.