Did Allie the Cat Reject Me?

RUSH: Folks, I wasn’t gonna tell you this because I know the Stick-to-the-Issues Crowd will go berserk. But I mentioned last night I was feeling sorry for myself, and I was, and it’s the strangest thing. I felt totally rejected by my cat. Now, there aren’t too many people that would admit this to you, just like there aren’t too many people who would ask the president not touch his girlfriend.

My little cat, Allie, now just about 14 months old, has established habits. She’s everywhere I am. When I leave the room, she follows. She is positioned to greet me every afternoon when I get home. She’s always around trying to make herself a nuisance or standing away at a distance, but she’s always in the room, brings her toy to me, wants me to play fetch with her. I mean, it still happens.

I fed Allie about seven o’clock, and that’s the last I saw her. Then it became 1 o’clock and I had to go to bed. I look around, no cat. I say, okay, when was the last time I saw her? My gosh, it’s five hours ago. The last time I saw her was when I put her food down. Ah, maybe she’s upstairs, tired. So I turned the lights off, did everything, went upstairs, no cat. The bottom line, I spent an hour-and-a-half looking for the cat, couldn’t find her.

I opened every door. I looked under every nook and cranny. I went outside. Could she sneak out? Finally at 2:15, I gotta get some sleep. I have an important radio program tomorrow. The cat’s gotta be somewhere. The cat’s being a cat, so I went to sleep and I fully expected to be awakened during the night with the cat jumping on the bed like she always does. I fully expected to be awakened earlier than I wanted to be by the cat in order for her to be fed. Didn’t happen. I woke up at 7:30, no cat.

Now I’m really worried. Is the cat lost in a nook and cranny in a crawl space somewhere in the house that I don’t even know exists that she’s found her way into? Kathryn had already gotten up and was out and about, so I sent her note, “I can’t find Allie.” I gave her a short version of what happened. “I just saw her. She’s in the library.” I said, “What?” “Yeah, she’s in the library.” 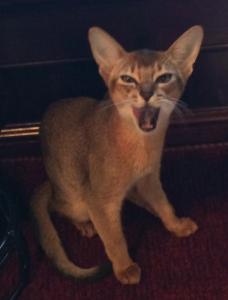 So I went down to the library, and out of nowhere, she appears, starts meowing, but she was acting scared to death-of-something. I put food down for her, she ate it, was looking around like somebody was gonna come take it. I still have no clue what happened. But it was odd, because it was such a total departure of what has become habitual behavior. You can’t blame me for thinking the poor cat — it happened when the previous cat got lost under a seat in the media room for a while. I still don’t know where the cat was.

I still don’t know where she went, and I was thinking, maybe the cat’s rejected me? A lot of people have been rejecting me lately, folks, so I figure, maybe the cat’s just chiming in. So, anyway, I got up, found the cat, left, and she followed me like she always does to the front door, and we’ll see when I get home if she’s still around. Kathryn said, “You know, you gotta lighten up. She’s just being a cat. This is what cats do. They have their own places. They go there. They don’t want to be bothered. They couldn’t care less about you.”

I said, “I’m used to the feeling.” (interruption) Well, I did, but I opened the whole house to her weeks ago. She’s had all this time to explore. (interruption) I went everywhere! You don’t understand. I went everywhere trying to find this cat. The only thing I didn’t check was under a couple of sofas. She had to be somewhere. So I was feeling sorry for myself. My little cat, my buddy, just said, “Screw you, buddy, I don’t need to go to bed tonight or do any of that sort of stuff.”

RUSH: No, no, no, go ahead and laugh. Go ahead and laugh. But I’ll tell you what, losing your cat is a different thing than losing your dog. You lose a dog, it’ll come back. You hear these stories dogs have returned 20 miles, 40 miles to their owner. Cat gets away, and it’s gone. It doesn’t know about coming back; it doesn’t care about coming back; it’s just out there. I was thinking all kinds of things had happened. At any rate, all’s well that ended well.