Why the Bushes Helped Rehab Clinton

RUSH: Here’s Eric in Kildeer, Illinois. Great to have you on the EIB Network. Hello.

CALLER: Hey, Rush, it’s an honor to be on with you.

RUSH: I appreciate it. Thank you, sir.

CALLER: Long-term listener and first-time caller as well, but I have two points. One, you’re talking about how Bill Clinton kind of resurrected himself, and what came to mind and always bothered me was, you know, the Bushes had a lot to do with kind of picking him up and brushing him off and putting him back on a respectable pedestal. I think without their help I don’t think he’d be where he’s at. And it’s kind of ironic because now he’s the biggest weapon against the Republican Party. So I just find that, you know, to me that was probably the biggest thing to kind of help resurrect his political life —

RUSH: I don’t know if it was the biggest, but it was big, you’re right.

RUSH: The “Hey, Bill, why don’t you come join us on this charity flight to the tsunami area.”

RUSH: “Hey, Bill, you and I will work together here, put forth a united front, the United States has arrived, the cavalry’s here. We’re here to help you out.” Yeah, there’s no denying that. And I think two things on that. One is I can only tell you what I think I know, and that is that both Bush 41 and Bush 43, whatever you think of them policy-wise or whatever, they have a deep reverence for the office, and they’re not gonna ever denigrate anybody that’s ever held it, they’re not. They’re not gonna be critical of anybody, not publicly. They are not going to do anything like the Democrats do every day to wreak havoc on the reputation of the institution. They aren’t gonna do it. In fact, they’re gonna do things to build it up. And if they think building up the stature of the presidency is to take Bill Clinton along — I happen to know the Bush family loves the guy. They find him just a harmless, good old party boy, personally.

CALLER: Yeah, I agree with you, and I’m sure they’re doing it for the right reasons, but the outcome is, you know, detrimental to —

RUSH: It just illustrates there is no competitive instinct, in many ways, at the highest levels of the Republican Party. Look, I’m not speaking out of school. I mentioned this when it happened. Way back in 1992 during the primaries of that presidential election year, Ross Perot was surprising everybody. Remember my invitation to the White House to spend the night in the Lincoln Bedroom as a guest of George H. W. Bush? The evening featured some discussion of the campaign, the election and so forth. And there was a point in time where President Bush said that he thought Tom Foley is a good guy, that he could actually work with Tom Foley. And it was Tom Foley I think he ultimately agreed to raising taxes with, Speaker of the House. 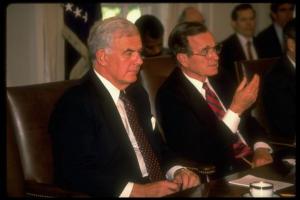 I’m pretty sure it was Foley. It was Jim Wright, and Foley came after Jim Wright, I think, and I lost track of who followed Foley. But it might have been somebody else, I’m not sure which, but whoever was the Speaker in 1992, George H. W. Bush thought he was a Democrat he could work with. He was a good guy. So that’s just, I don’t know, establishment blood. They’re power sharers. Don’t forget, Tom Foley’s the guy who became known for stealing other people’s meals on commercial airline flights. Remember that? You’d forgotten that, hadn’t you? We had a stewardess once that said, “Every time this guy’s on our flight he takes meals that other people don’t eat off the airplane.” He was no longer Speaker at the time, he had retired.