How the Left Screwed Up the Children

RUSH: Mr. Snerdley brought me something today in his Stack, and he said, “You’re gonna have to answer this for me, ’cause I can’t figure it out.”

“It’s a story about teenagers and how mean they are.”

So I said, “Okay, if anybody can answer it, I, El Rushbo, can.” Here’s the story: “From violence to verbal taunts, abusive dating behavior is pervasive among America’s adolescents, according to a new, federally funded survey. It says a majority of boys and girls who date describe themselves as both victims and perpetrators. Sponsored by the National Institute of Justice, the National Survey on Teen Relationships and Intimate Violence…”

“[T]he National Survey on Teen Relationships and Intimate Violence was conducted by NORC at the University of Chicago, a prominent research center which provided preliminary results to The Associated Press. Input came from a nationwide sample of 667 youths aged 12-18 who’d been dating within the past year and who completed a self-administered online questionnaire. Nearly 20% of both boys and girls reported themselves as victims of physical and sexual abuse in dating relationships — but the researchers reported what they called a startling finding when they asked about psychological abuse, broadly defined as actions ranging from name-calling to excessive tracking of a victim.”

“More than 60% of each gender reported being victims and perpetrators of such behavior. The survey found no substantive differences in measures by ethnicity, family income or geographic location.” None of that mattered. “Elizabeth Mumford, one of the two lead researchers for the survey, acknowledged that some of the behaviors defined as psychological abuse — such as insults and accusations of flirting — are commonplace but said they shouldn’t be viewed as harmless. ‘None of these things are healthy interactions,’ she said. ‘It’s almost more of a concern that our gut reaction is to accept this as natural.’ …

“‘Teens often think some behaviors, like teasing and name calling, are a “normal” part of a relationship,’ says a CDC fact sheet. ‘However, these behaviors can become abusive and develop into more serious forms of violence.'” Now, I’ve gotten this far reading this thing and I’m starting to get really confused. I’m starting to get very, very perplexed. I’m not figuring out how this can happen. How can all of this be? How can these young adolescents between 12 and 18 who are dating be so rotten to each other?

“Bruce Taylor, the other lead researcher for the NORC survey, said the overall abuse figures were higher than previous national studies of dating abuse, revealing ‘the startlingly widespread nature of this problem,'” and the piece de resistance: “‘We found that girls perpetrate serious threats or physical violence more than boys at ages 12-14, but that boys become the more common perpetrators of serious threats or physical violence by ages 15-18,’ they wrote” in the study.

Would you have called it “abuse” if it happened to you when you were in school? (interruption) Yeah. (laughing) Yes. He said, “What happened? It didn’t happen to us,” and he would have called it “lucky, not abuse.” It’s an awful double standard, it is, and we’re not mocking it. We’re not making fun of it, and we’re not… Well, actually we are. (interruption) Snerdley, yes. “The normal, red-blooded American young boy might not consider it abuse,” but some of them do.

Anyway, none of this is supposed to happen. The “good” people have been charge of our education system. The caring people, the compassionate people, the understanding people. I remember, ladies and gentlemen, back when I still lived in New York in the early nineties. Roger Ailes, who is now the CEO of Fox News, was the executive producer of my TV show. Every Saturday afternoon in the summer would have water volleyball games at his palatial home in the Hudson River, and there were all kinds of people.

Rudy Giuliani and his family showed up. There were all kinds of people there. Every week somebody brought somebody new that nobody knew. One week there was this 24/25-year-old female teacher that showed up, and after the volleyball games in the pool there was always a barbecue. Everybody sat around talking, and inevitably the conversation drifted to politics and current affairs. I’ll never forget this 24-year-old teacher began wringinog her hands and worrying that we were pushing our children too hard, too fast.

We were giving them too much homework and we’re making them work too hard and get up too early and spend too many hours at school and we needed to love them more and we needed to dial back the demanding tests and curriculum and homework. “These kids, we’re pushing them too hard.” That, of course, sent me through the roof, and I didn’t have any problem holding back. I said, “What do you mean? It’s just the opposite. 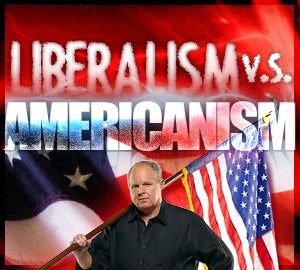 “You have to show them that they’re capable of more than they think they are, that they can learn more than they think they can learn, and they can do things that they don’t think they could. This is the only shot you’ve got at it.” She said, “I disagree. I think that is too mean-spirited, and you can’t paint with such a broad brush. You have to take the temperature of each individual.” I’m pulling my hair out, here, and I’m trying to be polite. I’m a guest. I’m not trying to cause any trouble.

But that’s early nineties, and I’m telling you, that was an early symptom of the kind of thing that I think has now taken over much of — not all, of course, but much of — the public education system. Coddling. You’re never wrong. Self-esteem! Hey, by the way, they’ve all been treated to self-esteem courses. “You’re wonderful. There’s nothing wrong with you, Little Johnny. Why did you dip Little Heather’s hair in the ink well? That’s okay. That’s… Johnny, you’re fine.” Actually, that might not have happened.

It would have in the early stages. Today, they’d put the kid in jail for sexual abuse. Regardless, this coddling, this babying. They got conflict resolution; they got sex ed. Ritalin! Can we not forget that, when it comes to the little boys, we’ve drugged them into basically being vegetables, and then we gave it a new name: Hyper-kineticism. Do you know what that is? That’s a normal young kid with a lot of energy. Now, I realize I’m on the wrong side of this.

I know that some of you in the audience are starting to scream, shout, that I don’t know what I’m talking about. But I think a bunch of people, a bunch of adults didn’t know how to deal with a normal hyperactive group of boys who… It’s just not in their nature to constituent still. They have to be moving. There have to be recesses. There have to be allowances. Rather than deal with that, it was just easier to create a disease and then a drug for it.

Regardless whether you think I’m right or wrong, you can’t deny we drugged ’em. We gave ’em Ritalin, and what is the effect of Ritalin? (interruption) Well, no. We don’t want to make ’em zombies. They’re not Walking Dead. But it dials you down, right? It kind of “smooths out the rough edges.” Yeah, it calms you down; smooths out the rough edges, right? And you sit there and absorb and gaze upon nature and think it’s wonderful, whatever. But it’s supposed to fix all of this.

And we don’t spank them. “Noooooo way! We do not abuse our children. No, no. We don’t spank them, and we don’t make them cut twigs from trees that they’re gonna be spanked with. We do not strike them.” We’ve sent them to sensitivity training. We’ve sent their teachers to sensitivity training. We’ve subjected them to various gender laws. I mean, we’ve done everything! We’ve done every liberal idea we have come up with to deny this certain reality.

We’ve instituted, implemented all of these programs — conflict resolution, sex education, Ritalin, sensitivity training, all of these things — and yet violence in the 12 to 18 age-group, according to this survey, is at an all-time high. What happened? And girls, aged 12 to 14, are worse than boys. Meaner and all. What happened? How can this be? We’re not pushing them. If they think 2 + 2 = 5, it is, so that we don’t humiliate them. We’ve tried to limit all forms of humiliation, including kids that learn faster than the others. We either slow them down or we give people at the low end better grades so nobody’s humiliated.

We, I thought, fixed all of this.

RUSH: Okay, so I just summed up what we’re doing, and Snerdley wanted to know, “Why isn’t it working? Ritalin, conflict resolution, self-esteem classes, sex-ed classes, even occasionally a teacher that will hit on a kid, gender laws, and yet they’re more violent than ever.” I think the answer here, the summation, is what we aren’t doing. None of this — conflict resolution, sex ed, Ritalin, sensitivity training, gender laws, none of this — even comes close to teaching children how to adapt to society, how to critically think, how to adapt to fluid circumstances, constantly in flow and changing on a dime.

The reason for that is, one thing that’s really absent in all these things that we’re doing to try to make sure no harm comes, is we’re not teaching discipline. We’re not handing any out — other than if they, you know, make gun with their index finger. Then we will take them to the principal’s office and read them the Riot Act. That’s if a six-year-old pretends to shoot a gun with his hand, but outside of that, no discipline whatsoever.

At the same time, we excuse and permit and even justify and explain all kinds of bad behavior and try to find reasons to explain it and justify it that have nothing to do with the child’s behavior. We tell them how wicked and evil our society is — how unjust, how racist, how discriminatory it is, how it’s oppressed everyone for centuries. Basically we’re not doing anything that in any way gets close to creating happy environments.