ItÂ’s the Best One Yet! Rush Revere and the American Revolution on Sale Today!

RUSH: I have been looking forward to this day, I can’t tell you for how long. It’s October 28th and today, Rush Revere and the American Revolution, Time-Travel Adventures with Exceptional Americans, book three in the series is actually on sale. The pre-order period is over, and you can now get that book, and you can have it in your hands. You can have it in your hands today.

Now, I know you would expect me to tout one of my own books. No news there. And you would probably expect me to tout it, oh, pretty positively. And, as such, you might think, “Well, of course Rush would say that. It’s his book.” But let me clarify this. This book, the first two are great and proud and happy, all of that, but as you write these, you hope they get better. In anything you do, you want to get better each time you do it. And a lot of effort has been put into this third book, Rush Revere and the American Revolution.

You see, folks, we live in the greatest country on earth. We have an incredible history, a great, great story. And our mission in this series is to tell that story. To tell the story of the American founding in a very relatable way so that the young reader can really get to know the exceptional patriots, the people who made this country possible. This is a once-in-a-lifetime experiment in how human beings organize and manage themselves politically, socially, economically as a population of a single nation. It was never tried before. It is miraculous. I love this country. I wish everybody did. I hope everybody will. And that is one of the many reasons for the Rush Revere series.

Now, it’s October 28th. Veterans Day is coming up. We have tied this book to the military in that we have dedicated it to them, and the timing of the release is to facilitate that dedication. What we’ve done in this book is we’ve gone back to various events in American history. I don’t want to give the story away.

But we’ve also combined the history in this book with a modern-day reality for many military families, and that is mom or dad being deployed to a theater of war and their young children, partially, understanding it but sometimes not really understanding it and having trouble coping with it, coping with the absence of mom or dad.

We have incorporated a story of just that reality into Rush Revere and the American Revolution, as a tribute to the people in the military who, above all, have risked everything to defend and protect and preserve our great country. The story involves our character named Cam. His father is deployed to Afghanistan. Cam has trouble dealing with his father’s absence and doesn’t understand it.

He takes it personally, feels a little — not abandoned, but rejected. But during the time travels back to crucial events in American history, the light starts going off in his head and things dawn on him, and it’s a beautiful thing. We all… This is a very small team of people that work on these books. It’s a labor of love. It takes help. I couldn’t do this myself by any stretch of the imagination. 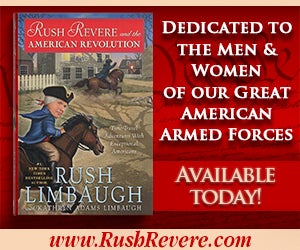 We’ve been so excited ’cause we love the military so much; we hold them in such respect. I personally just could not wait. I’ve not been able to wait for this book to get out into the hands of the people we love and cherish and admire so much in the US military, and we’ve incorporated that into this story. Now, when we first started the series, we talked a lot about how we could get younger people to enjoy history.

And in a way, not even know it was history. You wanted them to learn it but not demand that they learn it, not require they take a test to prove that they’ve learned it. We wanted them to enjoy learning it. So we’ve portrayed history as a series of incredible adventures. We thought the best plan would be to take them right to the action so they can experience these amazing events like the Boston Tea Party, like the Pilgrims arriving.

They have conversations with the actual people who founded this country, people like Benjamin Franklin. So the time-travel adventures were born. We created the time-traveling horse named Liberty. Rush Revere’s the substitute teacher at Manchester Middle School, and he can time travel with the horse. They can go back anywhere they want in American history, anywhere they want at any time.

Take some students, they go back, and actually live these moments in American history. This is the third adventure, Rush Revere and the American Revolution, and it really is a must-read. It’s heartfelt. It’s patriotic. It’s absolutely hilarious at times. It’ll bring tears to your eyes. We’re already getting that kind of feedback from people. And I say, I don’t want to give too much away.

But the story of Cam and his father and his mom, and his father’s deployment, is a key element in the book here as it’s dedicated to the US military. Because through the time travels, Cam starts to mature right in front of the reader’s eyes and learns from American history a great deal about the Why and the How of military people. It gives him some insight about the amazing sacrifice of all of our military heroes.

And when he realizes his dad is one of them? Oh, I guarantee you you’re gonna need some tissues nearby. Kids are gonna love it. Grandparents/parents are gonna enjoy sharing this with your kids. We’re very proud of it. It’s on sale today. Barnes & Noble. Books-A-Million’s got some great displays. Amazon, iBooks, you name it. Wherever you buy books, it’s out there, and it’s not expensive.

It’s not one of these $24.95 books. It’s a hardcover book just like the first two, and it’s got great graphics. Is the trailer ready to go yet? You have to go to our Facebook page, Rush Revere’s Facebook page. You have to go there. We have just uploaded a fantastic trailer or video that signals the arrival of Rush Revere and the American Revolution. You have to see this. It’s just… Folks, look, if I don’t tell you, who will?

And you know I’m not gonna lie to you. It is so good, and it follows our mission. It furthers the dream that we have with these books of educating young people about the truth of this great country. So I appreciate you allowing me to take this time to mention it, that it’s out there and available today. I appreciate your indulgence on this.

RUSH: Yeah, people told me I forgot to show the new book on the Dittocam. You’re right. There it is. It’s great artwork. It’s a great cover. Rush Revere and the American Revolution. The audio version’s out, and it’s the best yet, too. And I ought to know because I did that one, too. It’s unabridged. Every word is in the audio version, and it’s all available today. Just one more thing.

We love hearing your comments on Facebook and by e-mail about the books, and we are posting a lot of them. We are building a huge connection between readers of these books and the characters at both our Rush Revere Facebook page and the RushRevere.com website, and I especially want to thank Gloria Thompson for her Facebook message on the Rush Revere page a moment ago. It’s bringing tears to everybody’s eyes — and, Gloria, I just thought I would take a moment here to do it and thank you personally.