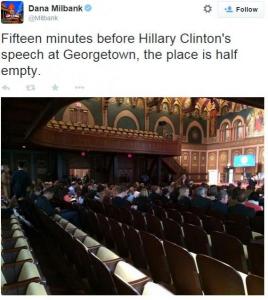 Nobody bought her book. They had to arrange, after it had already been a disaster, they had to arrange all these book signings and probably arrange and pay for people to show up and act like paying customers. She does not connect with people. So the publisher gives her this astronomical advance, buying and drinking the Kool-Aid, Hillary Clinton, most popular Democrat, just put the book out there and gazillions are gonna sell, and none did.

She goes to speak at Georgetown yesterday, and the place is over half empty. And it’s not the first time that has happened. So she may need help from this program again, depending on what other circumstances evolve in that campaign