Obama to Criminals: Come on In!

RUSH: It’s from Breitbart. “Internal administration documents show the administration is considering allowing terrorists, transnational criminals, and anyone else who wants to enter or stay inside the United States to not even answer if theyÂ’ve ever been connected with a crime.”

Now, stop and digest that for a second. Breitbart has come across some leaked documents from the administration which indicate that the Obama Regime is considering letting terrorists, international criminals, transnational criminals, and anybody else who wants to enter or stay in America to not even have to answer questions if they’ve been connected with a crime.

“The internal Obama administration documents, obtained by Breitbart News through a Department of Homeland Security (DHS) source,” which means that there is somebody in there that is literally outraged by this, which is kind of healthy to note that there is at least somebody at Homeland Security who came across this and simply can’t believe it and has decided to leak it to Breitbart. “Documents include a draft application for illegal immigrants seeking to stay in the country and future prospective immigrants seeking to the enter the country.” Legal and illegal, in other words, is covered.

By the way, this is a technique. Practically everybody showing up at the border or anybody showing up asking for asylum of any kind is basically claiming that they are being trafficked, that they’re victims of human trafficking in their native countries. That is what the T nonimmigrant visa is. “The U nonimmigrant visas are for those seeking to be considered a ‘victim of criminal activity.’ Part of the presidentÂ’s executive immigration action is to expand T and U visas.”

Now, as we have seen during the recent flood of illegal aliens across the border, illegal aliens are already being coached to claim that they’re the victims of sex trafficking or domestic abuse or some other criminal activity. So those are the kinds of visas that they will all be applying for anyway. So we’re opening the floodgates here to criminals.

Now, this is obviously gonna create a question. Why? Why would we do this? I mean, it’s bad enough that we are in effect erasing the border. That’s bad enough. But why are we openly, knowingly looking the other way when acknowledged criminals want to come into the country. Why are we looking the other way and saying “come on in.” Well, the “can’t discriminate against people” is part of it, but there’s a much, much larger reason for this. And, folks, it’s ideological.

This is one of those things that if I could just — you know, there are things in life that I, for example, say, “My gosh, if I could just convince a majority of people to believe this, to accept this, that we’d be over a big hump.” Now, one of the explanations — and I’m not kidding you on this. People like Barack Obama and, sadly, many Democrats today who believe in the inherent flaws of this country since the days of our founding — and those flaws all have to do with discrimination against minorities and people of color. And they believe that it is endemic, that it is systemic, and that it was purposeful.

That this country was founded by a bunch of rich, white professionals for themselves and their descendants, and these people knew that other people were needed, but they were never, ever going to be in positions to attain real power or real success. They were always gonna be second-class citizens. People like Obama — and he’s not alone — really believe that this country still has a huge price to pay for all of this discrimination and all of this unfairness. And if you object to this, they will say, “Well, isn’t the Mafia in this country because we looked the other way in the 1920s? I didn’t see anybody complaining about all the crime from Europe that we let in the country, so who’s to say that we can discriminate against modern day criminals? We let ’em in before.”

There are honestly people who will say that, as though we did it purposefully. But I dare say we never had an official immigration program. “If you are a member of the Sicilian mob, come on in.” But that’s what Obama’s doing. Obama’s telegraphing, he’s sending out engraved invitations for all intents and purposes. The criminals from Europe emigrating is just one example. There’s something much larger than that going on here, and it is rooted in the fact that the country must be transformed. The reason it must be transformed is because it’s illegitimate, it’s flawed, it is immoral, it’s unjust to the majority of people that live here, and it’s time to pay a price.

If a number of, say, radical Mexican immigrants were to stand up and say, “Who are you to keep us out? California was us. Texas was ours. You took it. What right do you have to keep it? We want it back. And if we have to come here and move here to repatriate it, we’re gonna do it.” And Obama would agree with that. Not publicly. I mean, you’ll never hear him say this in a speech. That’s the point. In a speech he’ll be understanding, but he would never tell you in public he agrees with that kind of thinking. But, for all intents and purposes, he does.

There are people in this country who really, really don’t like America and really, really, really think that it’s a rotten place because of our past and the way we were founded, and by God, this is how we gotta pay the price. We have owed people for 200 plus years. And there’s also a little bit of, “Who do you think you are? Why do you think you have an inherent right to not have to live among criminals when everybody in the world has to? What makes you special, Mr. and Mrs. America? You say you don’t want people like this in your neighborhood. Well, what gives you the right to say that? What gives you the right to discriminate that way? Do you realize most people in the world don’t have a choice in who they live next to? What gives you the right to think you should? What makes you better than anybody else? What makes you special?” 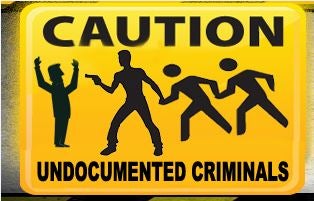 On the face of it, this doesn’t make any sense. If you value quality of life, if you value the things that make America America, there’s no way you would extend an invitation to known criminals of varying type, extended invitation, and then knowingly look the other way while welcoming them to the country. There is also one other aspect to it. And that is this drummed up notion that they’re being coached to say that they are victims of human trafficking in their native countries and they want to escape.

The reason they’re being coached to say that, because that’s a play on the abundant and overwhelming compassion the American people have. And the theory is, “Well, we can’t turn them away. Oh, my God, somebody shows up and just wants to be safe from the evils going on in their own country, who are we to say no?” You know, I’ve told the story I don’t know how many times, raging debate at dinner in Palm Springs with a world-renowned media guy, whose name I’m not gonna mention ’cause it wouldn’t serve any point, but you know who it is.

I got into big debate with my friend who is the host of the dinner, and this guy basically said, “Look, if somebody wants to come to my country to better their life, the hell I’m not gonna be the one to say they can’t come.” So there’s that aspect to it, “Well, they’re just trying to improve themselves, my God, and this is where they come, why can’t we? We’ve got more than we need. This country is so wonderful and we treat people that way.”

And my host said to this guy, “Well, what if one of these guys just illegally walks into your backyard and says he wants to date your daughter?”

“Come on,” the guest said, “that would never happen.”

“Well, it’s gonna happen to somebody, Mr. Media Person.” But the example was not a specific example, but simply an attempt to find the guy’s limits. Okay, at what point will anybody say, “No, we shouldn’t let those people in.” Or on what basis can they be persuaded? That’s all the question was, was an attempt to find out how far this guy would go. His opinion was really deeply rooted in guilt.

He had guilt that he was born in America, that he was prosperous and successful, and he just felt it was mean to tell a poor person trying to get here that they had no right to come, and that if they had to get here illegally that was fine with him ’cause they were trying to improve their lives. And since he’s got such a great life who is he to tell somebody else they can’t have one. So the Regime plays on all of these different emotions to get this stuff done.

In the meantime, what’s gonna happen? Well, by definition, mainstream culture, society, is gonna end up being corrupted, and all of this is happening at the very moment where we’re being told we have too many criminals in jail. There’s way too many people incarcerated, primarily people of color. It’s unjust and it’s unfair and it’s not the way to solve our problems. And so the impetus to imprison lawbreakers, that’s being attacked now as part of the unjustness and unfairness and discriminatory nature of this country.

It’s an all-out assault from within, and it’s sponsored by people who think they really, really do think that this country needs to find out what it’s like for most everybody else to live on this planet, and, furthermore, the reason we need to find out is because most of the squalor and most of the poverty can be rooted right back, traced right back to us, because we’ve conquered the world and we’ve stolen what we’ve needed from this little country or that little country. We sent the CIA to kill their leaders and take over, and we steal oil and natural gas. We do all these horrible, rotten things, and it’s about time we find out what the rest of the world lives like. I kid you not.

It’s clear that the Democrat Party didn’t have a whole lot of people today who think the US is the good guys. Listening to Dianne Feinstein today read her torture report, you’d have a tough time concluding that she thinks we’re the good guys.

So this is just unbelievable to me. It’s unbelievable. “Internal administration documents show the administration is considering allowing terrorists, transnational criminals, and anyone else who wants to enter or stay inside the United States to not even answer if theyÂ’ve ever been connected with a crime.”