It’s All About the E-Mails for Sony

RUSH: I want to expand on a little point that I made yesterday about what it is that really has the Sony executives scared, outside of Al Sharpton. And make no mistake, they are scared of Al Sharpton. We may laugh at it, and we would be right to laugh at it, but I’m telling you it is a great indicator of where we are now.

The executives at Sony, particularly Amy Pascal, but I’m sure all of them, are scared to death of Al Sharpton. They’re scared to death of what Sharpton could mean to their business. Stop and think about that for just a second. But aside from that, one of the things that’s really driving the fear at Sony, I believe — I could be wrong. Doubt it. But I think one of the major fears is the private information being revealed in person-to-person e-mails, such as what this producer Scott Rudin thinks of Angelina Jolie and how Amy Pascal answers, and what Amy Pascal thinks of whoever else.

I mean, it’s high school on parade. Remember in high school the big clique. Whether you were in it or not, there was something you noticed. Between class, members of the clique were passing notes to each other in the hallway on the way to the next class. If you weren’t in the clique, you wanted to be in on the clique so you could get the note. And if you were in the clique and got the note, if you were only one of two or three people sharing the note, you were at the really high point of the clique. Well, those notes are the equivalent of this e-mail in the big clique that everybody is seeing now. And we’re finding out that these great humanitarians are nothing of the sort. And we’re finding out that these colorblind, great, lead by example liberals are nothing of kind.

They’re not colorblind at all. They’re just as racial and racist as anybody else they criticize. We find out they mock President Obama because of his race. They make fun of black actors. They make fun of what they think are talentless actors. They rip and criticize massive ego, no talent actors. Hello, Angelina Jolie in these e-mails. And I really believe that it’s the threat of even more of those being released that has these Sony executives in a dither. I really, really do. And, you know, there’s evidence to support this.

Have you noticed, ladies and gentlemen, that the entertainment illuminati from The Oprah on up or down, depending on where you place her, are all suggesting, they’re coming out in their very best adult voices, in their most mature attitudes, and they are tsk-tsking the media for even publishing the content of these e-mails. They are quietly to loudly to forcefully to pleadingly asking, begging, demanding, suggesting to the media that they not publish the details of these e-mails discovered via the hack because it’s just beneath us.

Oh, yes. No one needs to know this. None of these e-mails would have been written had the people involved known that everybody was going to read them, and therefore they’re not really anybody else’s business. Tsk-tsk. You in the media shouldn’t be writing and publishing these e-mails because it’s just, why, helping the hackers, it’s helping those who are threatening our dear friends in the Hollywood community at Sony and so forth.

Now, isn’t that telling, too? I mean, the very same people who are hell-bent on finding every bit of information on their political enemies they can and then disseminating it and then using and then trying to destroy people, are now saying, “Not us, not us, don’t reveal our private communications, no, no, no, no. The media shouldn’t be helping the hackers by doing this. This is so beneath who we are.” Yeah, right.

So I’m telling you, this is the big fear, if you ask me. And at its root, it’s high school. And the thing is that all of these people who are groveled over and coddled are finding out what people really think of them. And the low-information voter and movie buyer, box office attendee, they are finding out what their bosses think of these people, and vice-versa. The idea we shouldn’t be publishing, oh, no, no, no, this is terrible, it’s irrelevant, what is happening in these e-mails.

So they don’t want anything known about them. And these are the same people, ladies and gentlemen, that are doing everything they can — let’s run a little experiment here, if you will. Just thinking of a little thought experiment. What if — just play along with me here. What if instead of mocking Kim Jong-un, what if Sony had made a movie mocking our Dear Leader, Barack Hussein O? What if Seth Rogan and James Franco and the whole cast of The Interview happened to star in a movie that mocked Obama?

Now, let’s not even include — I mean, The Interview is about the CIA asking two journalists to assassinate Kim Jong-un. Let’s take that out of it in our pretend movie in our thought experiment here. Let’s just say Sony gonna be doing a movie mocking Obama. Do you think that George Clooney would be writing people e-mail saying, “Do not object to this. We are artists. This is free speech. We must allow the creative community its outlet. We must permit people to make the movies of their dreams and desires, and it is not our business to censor them.”

Do you think that there would be calls from all over the place to pull a movie that mocked Obama? Do you think there would be pressure brought to bear on movie theaters not to exhibit — i.e., show — a movie that mocked Obama? Would there be threats? Maybe from some of the same people incensed over what the North Koreans are doing. Can you imagine the same people angry at Sony for caving to the North Koreans, do you think that they would be angry at Sony for caving on a movie mocking Obama? Nope. They’d be supportive of that. They would be leading the charge to make Sony cave. 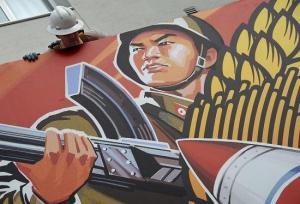 If there’s a movie mocking Obama, you know as well as I do that this same bunch from Oprah on down or up, whoever, would be all over Sony to pull that movie and not show it anywhere and not put it on the Web, not make it available to torrent sites, not make it available for sale, no video on demand, no nothing. The same people demanding that we not cave to North Korea would be demanding that Sony cave to Obama. And I mention this thought experiment only to illustrate the hypocrisy of what’s going on.

Now, it doesn’t change one thing. It really is outrageous. I mean, it is supreme cowardice to do this. And, by the way, the FBI has made it official now. The FBI says that this is a North Korean hack. Now, the hackers, whoever they are, have issued a letter. They sent an e-mail to the executives at Sony praising them for withdrawing the movie, The Interview. I have in my formerly nicotine-stained fingers here, I have a copy of the e-mail the hackers sent to Sony. I’m gonna read it as it’s written.

“It’s very wise that you have made the decision to cancel the release of The Interview. It will be very useful for you. We will ensure the security of your data unless you make additional trouble.”

The e-mail then demands that Sony continue to cooperate with further demands from the hackers or else they will release more data. Specifically, the hackers demand that all traces of the movie be wiped from the face of the Internet. They say, “Now we want you never let the movie released, distributed or leaked in any form of, for instance, DVD or piracy. And we want everything related to the movie, including its trailers, as well as its full version down from any website hosting them immediately.”

America as a superpower? You know how you can tell that America as a superpower may be in its last days is by looking at the way — here we have a bunch of hackers, I don’t care if it’s North Koreans or whoever, a bunch of hackers have brought a major movie studio, owned by one of the world’s largest technology firms, Sony, to its knees, and the State Department and other officials of the US government admitting openly that our options to deal with this are limited.

Now, if you happen to be the mullahs in Iran looking at this, if you happen to be Bashar al-Assad in Syria, if you happen to be anybody, imagine you’re the Castro brothers, and you see a picture of Obama sniffing a Cuban cigar at a White House party Wednesday night, and then you see the government saying (imitating Harf), “Oh, my God, this is why I got into government.” That’s what Marie Harf said. “This is why I did it. This is the reason I wanted to go into government to do some productive things, opening up relations with Cuba.” And the Regime talking about inviting Castro, what in the world would you think you couldn’t get away with, with the United States? And we still have two more years of this. This Cuba thing, it’s just the tip of the iceberg, as I warned effectively mere days ago.