Sony Reverses, Will Release The Interview on Christmas Day

RUSH: Well, the Drive-By Media cannot contain itself. The Drive-By Media is blowing up because Sony has just announced they’re gonna show the movie. It is going to play officially, not just in independent theaters, but Sony is going to release the movie, The Interview, on Christmas Day, despite the threats from the hackers that they would blow up the theaters, blow up Sony. 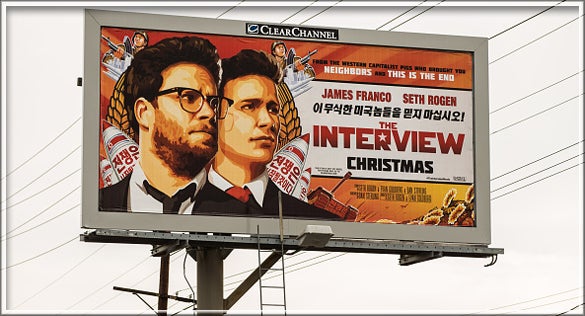 This is a stark turnaround. I mean, this is a huge 180, Sony going from appearing to kowtow and back off and reacting to the threat, to now almost defiant. And it looks like the number of theaters that are signing up to show the movie on Christmas Day is growing pretty rapidly. So quite a reverse and the Drive-Bys can’t contain themselves, they’re so excited about this. Why do you think that is?

Why would the Drive-Bys be so excited about this? Because they sense that there’s going to be unrest. You add this to the unrest that’s taking place over the grand jury decisions and the racial protests going on, the Drive-Bys could have the best Christmas they’ve had in gosh who knows how long. So that’s that.

RUSH: Here is Jake in Altoona, Pennsylvania. Hi Jake. You’re next. Great to have you on the Rush Limbaugh program. Hello.

CALLER: Hi. How are you doing?

CALLER: Hi. I just have a question. This is coming from a guy who has a flip phone. The North Korea Internet blackout the other day, whether or not it was caused by us, what do you think that would do to our society if something of that sort happened, considering I’m gonna say the majority can’t live more than 10 minutes without the Internet or looking at the —

RUSH: Well, forget that. You know what an electromagnetic pulse is?

RUSH: Okay, if one of those was detonated or set off, and they usually accompany a nuclear blast, but people have been working on creating massive versions of them as a weapon, forget the idea that we’ve become addicted or dependent, it’s worse than that.

CALLER: I mean, I guess my question is, what would happen, let alone —

RUSH: I tell you what, airplanes would fall out of the sky. Hospitals would shut down. Virtually everything is connected, everything is part of the Internet, everything’s online. The interconnectability of our culture. It’s not just the social media and people texting each other and Pinteresting each other and Snapchatting, and all this. It’s far more involved than that. It would be just like the electric grid going down. It would be disastrous for all realms if the actual Internet went down. An individual network here or there, not so much, but if the whole thing were hacked, if the whole thing were shut down, it would be a disaster.

Utility plants would maybe go off line. I mean, everything involves computer chips today. And computer chips largely need Internet connectability or do have. I don’t know how much it’s really required, but it doesn’t matter, they’re linked. The Internet is far more intricately woven into the fabric of society than just social media. That’s just a tip of the iceberg. The military, they have their own separate Internet per se. If somebody attacked that, if somebody succeeded in hacking that, taking that down, there would be no communication ability, satellite, GPS, all of that. Everything you can imagine would cease to exist.

I mean, the interdependence of our society and the Internet is far more than a bunch of teenagers not being able to send texts and photos to each other. Well, that would be a factor as well. But you’d have no television. Many people’s cars wouldn’t start. There’s any number of things. It would be a calamity. It would be an absolute disaster. And what did I read the other day? I think the story of the North Korean hack. I can’t remember specifically. I think it was a story involving the military admitting that we don’t have a plan in place to deal with this kind of an attack, that we are five years away from having a backup or a plan to deal with something like this.

The story was one of shock and dismay that we don’t have a plan. We know how vulnerable this would be, we know how vulnerable anybody is to loss of network connectability, capability, and we don’t have a plan for it, and how long have we had the ability? That was a multifaceted story, most of it built around the shock of everybody when they learn that we have no backup and that we’re five years away from being able to deal with that kind of attack. So I think, based on the nature your question, it’s a much more serious problem than you’re thinking.

Now, the North Korean Internet is so backwards, other than their military. Their military can do all kinds of things, but they’re really assisted by the ChiComs on this. But the actual, quote, unquote, version of the Internet that exists for the country at large is the equivalent of 56K modems. I mean, it’s backwards. It wouldn’t be much of a loss. They don’t have electricity anyway. Half the country’s starving. Now, the first people that get fed are the leadership and then the soldiers, and then after that you fend for yourself. And that’s why they practically eat anything. It’s just as backwards as you can get, which is another reason why some people, “Come on, you think the Norks actually did this to Sony by themselves? Not possible. They don’t have the ability to do it.”

You know, they make a big show of launching all these so-called nuclear missiles, but they never go anywhere. But they’re trying. That is the point. The Norks are trying, and they do spend whatever money they’ve got on their military, and they’re provocative, and for the most part they are allied with the ChiComs. So they do constitute a threat. When they were placed in the axis of evil, it was legitimate.

But the degree to which more than you would ever believe, in terms of institutions, businesses, institutions, and just hospitals, government, you name it, the connectability that everybody depends on would be huge if it went away, if it were successfully hit. Granted, your assessment that social media would create a bunch of crying maniacs is also true, but it would be far, far greater than that.