RUSH: Okay. So I made a prediction to Mr. Snerdley while the House vote was underway. And it’s turned out exactly as I predicted or forecast, and he’s sitting in there and cannot believe it. Snerdley is very invested in this vote. Snerdley is very tight with many of the people in the opposition, and like many of us, would love to see a leadership change in the House of Representatives, and as such, Snerdley has been glued to C-SPAN. That’s why I don’t have any calls up there.

Not yet over, because there’s some people that didn’t vote. They’re now trying to find those people, round ’em up, and get a vote out of ’em. I don’t know how many that is. There was also one member of the House that voted “present.” And I thought Obama was the only guy who did that. I don’t know who it is. But right now we stand at 28 votes with an unknown number of members who didn’t vote, didn’t answer the roll call. They’re trying to find ’em now. And so the opposition is breathlessly hanging on here by a thread. Just one vote to go. And I predicted to Snerdley that they’d get to 28. You’d get so close, so close, it would be a moral victory. But at the end of the day, no cigar.

Where does it stand now? (interruption) Well, they’re still trying to find the people that passed on the roll call the first time, right, but we don’t know how many people that is. (interruption) Yeah, yeah. It’s gonna be over soon. You want another prediction? Okay. That the people that they’re trying to round up now are also in Boehner’s camp, and they didn’t vote so as to be held out to see if their votes are needed. The old Clinton Marjorie Margolies Mezvinsky trick, if you will. I’m afraid you’re gonna end up stuck at 28. But I hope not, I hope they get — see, what happens if they get to 29, that constitutes a veto.

I guess that’s the best word for it, that Boehner’s Speakership vote has been vetoed.

It doesn’t elect a new Speaker. It just thwarts Boehner on the first ballot. That means you go to the a second ballot and that’s where it would get really, really interesting. Now, Mr. Snerdley, just so you know, Gloria Borger just reported on CNN that Boehner won in a landslide. Gloria Borger just reported on CNN that there was never any doubt. She said that Boehner had a huge cushion because of all the newly elected Republicans that owed their election to him. It’s a continuation of this folly that was in TheHill.com this morning that I mentioned right at the top of the program.

TheHill.com has a story, they can’t understand why all this opposition to Boehner, why, Boehner is the guy that led the Republicans to this massive victory in November, and these people ought to be bowing down to Boehner in gratitude for getting them elected and so forth. That is how pig ignorant these people in the Drive-By Media are about the way Congress works. ‘Cause what’s gonna happen now, Boehner — this hasn’t changed sense Henry VIII would eat five turkey drumsticks at dinner. If you don’t take the king out, you’re gone. ‘Cause the king is gonna take you out first chance he gets.

And what’s gonna happen here is that Boehner will surely try to punish members of these 28 that voted against him. It’s the standard operating procedure in any organization. So, anyway, looks like it’s gonna end up at 28. They needed 29. Moral victory. And of course there really aren’t any of those.

RUSH: It turns out that at least a couple of hard line Boehner votes who promised to vote anti-Boehner ended up voting for him. I don’t have the names in front of me. Groffman is one, I think. Mia Love voted for Boehner. Pete Sessions, well, that stands to reason. Pete Sessions voted for Boehner. There’s one other thing, though. Last I saw there was only 401 people that voted. (interruption) Who? Yeah, they can’t find Trey Gowdy.

But here’s the thing. It may be that they need more than 29 now. Remember, this 29 votes needed was based on 435, and 218. If 401, say, is the number, or 410 and not the 435 — I don’t know. I’m just openly speculating. I have to look at it, but they might have ended up needing more than 29 if they had a significant number of no-shows. I don’t know if that’s right. But regardless, if they end up with 28 it’s gonna be hard to convince me that the whole thing wasn’t designed to tease. So close, so close, and then blow the chip shot field goal in the last second.

CALLER: Hey, Rush, happy 2015. I live here in Texas, but not the biggest Cowboy fan, but that’s okay.

CALLER: You know, Rush, your comments just a minute ago were exactly what I was calling about. I’m sitting here watching C-SPAN, watching the vote take place, and I’m not a conspiracy theorist at all, Rush, but, you know, getting to 28 votes and being so close, to me almost seems like it was a contrived event just to throw the base, you know, we the base, some red meat to make us feel good. You know, we gave it the good fight but we just came one vote short.

CALLER: Rush, and seeing Trey Gowdy, who I totally respect, not even show up to vote. We’ve gotta phrase down there in Texas, and that’s, “Big hat, no ranch.” That’s kind of how I feel today about Trey Gowdy.

RUSH: Yeah, we interviewed him for the Limbaugh Letter, and I remember really liking him, and I still do. Don’t misunderstand. But, look, Boehner put him on the committee. Boehner gave him the Benghazi, whatever committee he’s got. I don’t think it was realistic that Trey was gonna vote against Boehner. Yeah, Trey Gowdy nominated Boehner in November. I think there’s a lot of expectations that people had here that weren’t really realistic. Look, the Speaker of the House is a powerful person, folks. It’s not like we’re trying to take out, you know, Aunt Agnes and get her committed to the home. This is a serious position with a lot of power, and people are gonna buck it at their own peril, and with as much fear that is permeating the people of this country, this ought not surprise a lot of people. 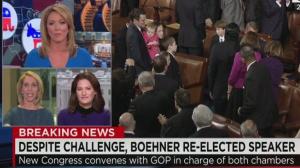 RUSH: I’ve been watching the news networks here. It’s stunning, all of the news readers and all the reporters and all the analysts at CNN are just ecstatic. They’re all smiles that John Boehner has been reelected Speaker of the House. Why, even Nancy Pelosi is happy. What in the world does that mean? Well, I don’t know. But I’m just gonna tell you this. I would feel a lot better if everybody were ticked off at whoever was elected Speaker. I’d be much happier today if the media, if CNN was ripping whoever was elected Speaker, then I would know we got the right guy.

But they’re all smiles. Oh, yeah, the establishment, they pulled another one out, folks. They hung in there, they hung tough, and the establishment lives to triumph another day. They’re literally all smiles. Look at Pelosi. She’s almost as happy as if she’d won herself. The Drive-Bys at CNN are all happy. Oh, man it’s a sight to behold.