RUSH: Now, this is what I was gonna say also before this parade or this rally that happened and whether it’s effective or not. Yesterday we had on the program news that Boehner was actually embracing — remember, this is an AP story, and they were livid. They were trying to humiliate Boehner. They were trying to embarrass him. They were accusing Boehner of secretly, privately embracing the Tea Party wing of the House Republican caucus and supporting them in his effort to defund elements of the Department of Homeland Security, which would make Obama’s amnesty financially impossible.

And the New York Times, when they found out about this, they were livid. So they had this story yesterday that basically was trying to humiliate Boehner and shame him for doing this kind of thing. I read this story, and I read it out loud here, too, and I was kind of amazed that this was the one area of the budget that they all agreed to that runs now through the end of September that they left open. And it is, in fact, the House Republicans are gonna target and withhold funding for certain elements of the Department of Homeland Security, which will make the implementation of Obama’s executive amnesty orders a little bit tougher to do.

Well, Boehner after the AP story, has come out and said (imitating Boehner), “No, no, no, no, wait, wait, wait a minute. Well, you’re misunderstanding what my purpose is here.” Boehner said this is not so much about immigration as it is us asserting ourselves against a president who is engaging in activity outside the Constitution. What we’re actually doing, we’re not really focusing on immigration here. We’re simply trying to establish that we’re the ones who write the laws. And my take on that was that the AP story must have had some impact because Boehner walked back. He didn’t say we’re not gonna do this. He’s just changing what he says is the express purpose.

So along comes this AP story today: “The No. 2 House Democrat says Congress risks sending the world a message of disunity in a time of terrorist threats if it fails to quickly fund the Department of Homeland Security. Rep. Steny Hoyer says some Republicans are trying to use the agency funding bill as a vehicle to overturn President Barack Obama’s immigration policies. The Maryland Democrat, who is his party’s whip, says this is complicating prospects for passage on legislation that, in most respects, has virtually unanimous bipartisan support. Hoyer tells MSNBC Tuesday that conservative Republicans ‘want to have confrontation’ on many issues.” That’s all they care about, is just a confrontation.

Hoyer said that “he hopes House Speaker John Boehner can tame recalcitrant GOP lawmakers.” Now, what a stretch. The No. 2 House Democrat says “Congress risks sending the world a message of disunity in a time of terrorist threats if it fails to quickly fund the Department of Homeland Security.” For crying out loud, we’re only talking about a few tiny areas of the Department of Homeland Security that would have to do with funding Obama’s unconstitutional amnesty. And Hoyer wants you to think and everybody else to think that the terrorists around the world are watching, and when the terrorists see that we’re not unified about our president’s policies, why, it makes us even more ripe for attack. It’s absurd.

Once again the Democrats continue wittingly or unwittingly to align themselves with America’s enemies. The recalcitrant Republicans are simply trying to adhere to the Constitution and use whatever tools they have at their disposal to see to it the president does, too. Or, if failing that, at least try to illustrate to people how the president is behaving in an illegal manner.

RUSH: My heart bleeds for these Democrats who just got shellacked. A landslide election defeat, and here they are running around bleeding and whining and moaning that the House Republicans are “sending a message of disunity” by attempting to stop the president’s wanton, unconstitutional executive orders on amnesty. Pelosi’s out saying the same thing. Let me ask a simple question: What was Steny Hoyer’s position on funding Bush’s surge? Remember the surge in Iraq? 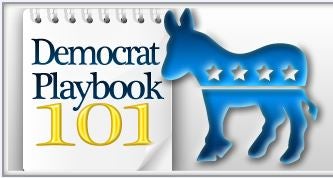 Do you think the Democrats displayed any “unity” whatsoever in the last three years of Bush’s term in the war in Iraq? Hoyer and Pelosi and the Democrats and their media are turning reality on its head. They’re claiming the Republicans are threatening to shut down the Department of Homeland Security at this time of increase peril from terrorism, when in reality it is Obama who is threatening to shut down DHS by vetoing the House’s bill, which would fund it!

It’s the exact opposite.

It’s the usual misdirection play that these people run all the time. This is Obama’s doing, if he vetoes this bill. Obama is gonna defund the Department of Homeland Security. This is why the Republicans left it out in the omnibus budget bill they just agreed to last month. The Republican bill specifically funds every part of the Department of Homeland Security that’s involved in security, including the Secret Service, TSA, the Border Patrol, Customs, and ICE.

That is a detail the Democrats and the media are refusing to mention. The Republican bill does not defund any aspect of Homeland Security that deals with terrorism. The only parts of DHS that get defunded are those that would fund Obama’s illegal granting of amnesty to illegal immigrants. Besides all that, when’s the last time these Democrats showed unity with the Republicans on any war that we were engaging in that had to do with the War on Terror?

Quickly go to the phones before the hour expires. This is Robert somewhere in Pennsylvania. Great to have you on the program, sir. Hello.

CALLER: Rush, mega dittos from a longtime listener, first-time caller. I’ll get right to my point. I’m calling you today because I love America. My parents emigrated to the United States in the early eighties when Francois Mitterand and his cronies, the socialist regime, took over in France. I’m active duty military now. My parents came over because they was where France was going. They saw this artificial world that Mitterand and now Hollande creates.

It starts in academia, moves to media, and then it infiltrates government.

They came to America to get away from that. They came to America because they saw the land of opportunity, free enterprise, and the possibility for a better life, and they did so well for themselves here. I was born here, and I was raised here to love America. My fear now, Rush, is that we’re starting to go down the same road. I know it’s been said many times, but when you have folks that are unwilling to recognize that this kind of political correctness that we’ve been embracing for the last 15/20 years that you rail about so much, when folks in the mainstream do not realize —

RUSH: I’m gonna tell you right now: Political correctness is killing our culture, and it could end up really, really damaging this country. I think there’s a grain of that going on, here. I don’t think the Regime is engaging in political correctness. They are hiding behind political correctness. I think there’s far more going on here, in the inability or the unwillingness to properly characterize who our enemies are. This goes back to almost immediately after 9/11, by the way. It wasn’t long after that, State Department people wanted to stop using the word “terrorism,” and it’s just built on that.

Look, I gotta run here, Robert, but I appreciate the call. I get your point. Well made.