Caller: Just Say No to the IRS

RUSH: Laura in western Nebraska. It’s great to have you. Thank you so much for waiting. Welcome to the program. Gives whole new meaning to, “Yes, we can.”

CALLER: Yes, we can.

CALLER: Throw a can and get shot.

RUSH: Take this, intruder, “yes, we can,” si, se puede, whatever it is. Laura, I didn’t mean to interrupt you. Just thought of that when you called.

CALLER: It’s okay. Rush, I hate to go backwards in the show, but you were talking about John Boehner and Barack Obama, why Boehner should be angry with Obama taking over separated powers, and what I called to say was there’s more to that than just John Boehner allowing him to do it. Congress has allowed him. They have empowered him. But so have We, the People. This country was founded based on a government that was a government by the consent of the governed. And We, the People have got to find a definitive way to withdraw our consent or this county’s lost, because the Republicans will not save it.

RUSH: All right. So where have we consented to what is happening in Washington? You think the people that voted for Obama actually voted for all he has done? I’m not gonna argue with you that the American people, the brainiacs of the world, but they have been greatly deceived here.

CALLER: They have been deceived but, yeah, those of us who didn’t vote for Obama and who see what’s going on, we can sense every day because get back on the hamster wheel and we allow a militarized government — the EPA, the IRS, the Department of Education — to intimidate us into doing what the government wants us to do —

RUSH: What do you mean, we allow it?

RUSH: How are we…? Wait a minute. Wait a minute. I’m gonna include myself in your charge here. How am I or you — how are “we” — allowing it? We’re trying to stop it. The only manner at our disposal is electing people that will stop it and they don’t choose to do it.

CALLER: I don’t agree with that. 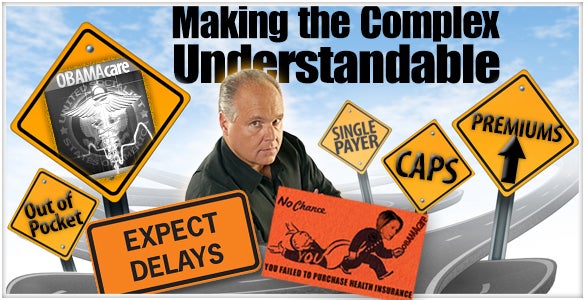 CALLER: I will not comply.

CALLER: I will also begin writing the IRS a check for 15% of my income. If they want more, they’ll have to come and get me.

CALLER: I guess if I go to the jail for a while I’ll get cable and maybe a jailhouse attorney. But I think in good conscience, we are being cowards, and I just cannot comply anymore with their constant lawlessness.

RUSH: I’m totally sympathetic. When they give a recession, I don’t participate. I know what you’re talking about.

CALLER: I guess… I think we have to find a way to say “no,” Rush, because Congress is not going to do it for us, and we are losing our country.

RUSH: So you would propose that people en masse refuse to play with Obamacare, just refuse to pay?

CALLER: Well, they can’t arrest 250,000 of us, and it would be even harder to arrest 2.5 million of us. They would have to address us, finally, not just during election time when they can flood us with ads.

RUSH: I wonder. I wonder if they would have to address it.

RUSH: Doesn’t matter. Social Security is broke. The War on Poverty is a joke. The Great Society’s broke. It never was flush.

CALLER: And if people stop paying for it, they’re going to have to do something about it.

RUSH: Well, there’s the IRS again. You will go to jail, and they will find a way to make an example of people who publicly flaunt them and try to persuade others. They will devote every amount of resources they’ve got to making an example.

CALLER: I think they will, Rush, but someone has to be that person that stands up. Someone has to stand out. If our Founders looked like this, we wouldn’t be here. The king was gonna make an example of many people, too, and it didn’t stop them. 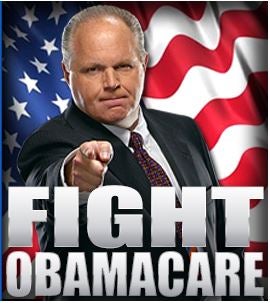 RUSH: Yeah. In fact, I was talking to somebody the other day. This is totally unrelated to what you said. It just jogged my memory. I talked to someone the other day who told me that there is more going on in this country that would cause a revolution than the king was doing to the colonists back in the 1700s.

CALLER: By far, by far. John Hancock was one of the wealthiest Founders, and he was willing to risk everything he had. His life and his freedom. I ask you, Rush. You were talking about the VA Scandal and what happened to the veterans in this country. My son was in the Marine Corps. He watched friends of his that weren’t even old enough to drink yet die for his country, and I’m not willing to go to jail and watch cable TV? Then why do I deserve the protection of those kids?

CALLER: No, but we did have leaders. We had men willing to stake their lives —

CALLER: — and their sacred honors on the future of this country.

CALLER: If we don’t have those people anymore, what is the point of remaining outside of jail, because we are not free.

RUSH: Well, there are ways for the states to get involved and arrest some of this.

CALLER: There are ways that I can tell you, Rush. I’m from Nebraska, a deep red state, and I’m gonna tell you what my Nebraska legislator did today — and I am from the most conservative and the largest legislative district in Nebraska.

CALLER: I’m also from one of the largest congressional districts in the country, because no one lives out here. I’m in the middle of Sioux County, which is as big as Rhode Island and has fewer than 1200 people.

CALLER: He introduced the medical marijuana law in the state of Nebraska right on the heels of the Nebraska Sheriffs Association suing Colorado for the damage the marijuana law is doing in Nebraska. That’s how conservative the quote/unquote “conservatives” in red states are.

RUSH: Wait, wait. What? How in the world is the Colorado marijuana law damaging Nebraska?

CALLER: The arrests and the amount of jail time people are now doing in Nebraska from transporting marijuana down I-80 to get to Colorado has been phenomenal.

RUSH: Oh. Well, you know where that’s headed, don’t you?

CALLER: Well, and that’s not even my point. I’m one of those people that says if we went back to personal responsibility we could legalize drugs. If you want to sit and do heroin all day, that’s fine. But if you starve to death on the streets, that’s your choice. But we can’t get there because now we can’t even be personally responsible for anything we do.

RUSH: You really are an extremist.

CALLER: I must be. But we used to spend every waking moment our legislature was in session trying to keep them from bolting left. If left to their own devices, that’s the way they turn.

I mean, I know plenty of both. I know plenty of pessimists, defeatists, fatalists. But I know people who think that. They don’t know what, but something’s gonna happen and cause this massive awakening. The tipping point, somewhere, is gonna be reached. They can’t tell me what they think it is, when it’s gonna happen, who’s gonna be responsible for it, but there are people that do have that hope. Anyway, Laura, I appreciate the call. I really do. I understand where you’re coming from a hundred percent.