RUSH: There’s one guy on the Democrat side, and there may be more, but there’s one guy who is not afraid of Obama’s incompetence in foreign policy at all. In fact, there’s a guy out there that is not worried about much of anything here, except Israel. Does that give you a hint as to who it might be? The problem in Paris: Israel. Terror attacks around the world: Israel. Because of their mistreatment of the Palestinians.

He’s an American. Jimmy Carter. Wait ’til you hear this. This is Monday on The Daily Show. Excuse me. I almost belched there. He was on Comedy Central, and he was asked this question: “I view ‘this extremism’ as a kind of pretext, this idea that itÂ’s a religious backing, seems a pretext for just powerless… theyÂ’re angry, nihilistic, and if they did not have the religious part, it would be something else, they would use something else as a pretext to be violent in this way.”

“I view ‘this extremism’ as a kind of pretext, this idea that itÂ’s a religious backing, seems a pretext for … theyÂ’re angry, nihilistic.” Does anybody know what that means? You want to take a stab? What do you think it means? (interruption) Okay, so the question to Carter, “Hey, it’s not that they’re religious, it’s not that they’re Islamist. They’re just ticked off. They’re just angry, and they’re using their Islamism as the reason, but if it weren’t that they’d come up with –” Is that what the question is? (interruption) So they’re not really Islamists. They’re just a bunch of — they need some adderall. They need some ADHD med meds. They’re too active and they’re running around shooting people, and if America didn’t have such stupid gun control laws it probably wouldn’t have happened in Paris, right?

CARTER: One of the origins for it is the Palestinian problem. You know, and this aggravates people who are affiliated in any way with the Arab people who live in the West Bank and Gaza, what they’re doing now, what’s being done to them. But I think that’s part of it.

And Carter’s supposed to say, “That’s exactly right. These young men, if they’re not mad about this, they would be mad about the Israelis. If they weren’t mad about this, they’d be mad that I’m not president anymore. You’re exactly right.” That was supposed to be the answer, but instead Carter says, “Well, one of the origins for this,” and he’s talking about the whole event in Paris. He’s not even reacting to the question. “One of the origins for this is the Palestinian problem, you know, and this aggravates people who are affiliated in any way with the Arab people who live in the West Bank and Gaza and what they’re doing now, what’s being done to them. I think that’s part of it.”

You know, it’s no wonder college kids love this show. Who can possibly translate this? But, anyway, that’s the setup to the big one that comes next. Jimmy Carter thinks that terrorism is gonna end up being good PR for Islam. All right? Here’s the question. This is on Huffing and Puffington Post live. This is a different host. This is Marc Lamont Hill, and he says to Jimmy Carter, “ThereÂ’s been a concern among some Islamic leaders that that very small percentage, that a handful of people in relation to billions of people are unfairly being seen as representatives of the religion and that itÂ’s producing a kind of Islamophobia around the world. Are you seeing that?”

So two times here, different places, Jimmy Carter is being asked to agree with the premise, “Hey, there is no Islamism here. These are just a bunch of radical extremists. This is not what Islam is.” And Carter is supposed to agree with both premises. And here’s what he says in answer to this attempt to get him to agree with them. 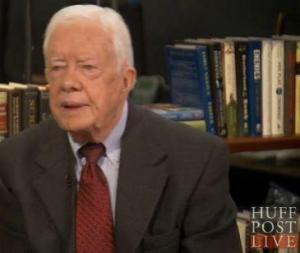 CARTER: I think this is going to give a lot of people an incentive to look into Islam and see what is it about this religion that makes it great, that makes it appeal to really billions of people, and to understand that the Islamic leaders condemn this kind of terrorism just like the rest of the world condemns it.

RUSH: I’m sorry. Is that not — I guarantee you, Leslie Gelb is probably afraid of this guy, too. You talk about non sequitur nonsensical. Okay, let’s parse this. Again, Marc Lamont Hill is trying to get Jimmy Carter to agree that the terrorists are not really Islamists, they’re not representative of the great religion of Islam. Just say yes, Mr. President, and go on to the next show.

Instead, Jimmy Carter said, “I think this is gonna give a lot of people incentive to look into Islam and what it is about this religion that makes it great.” Yeah, militant Islamists killing 12 people is gonna make all of us curious to go find out what’s great about this religion. Jimmy Carter: the fact that they run around doing all this terrorism, I mean, that’s gonna make an appeal to really billions of people. It does appeal to billions of people, and we’re gonna be investigating here to find out why, to understand the Islamic leaders, condemn this kind of terrorism. Just like the rest of the world.

Look, I don’t want to be insolent here, but who’s he talking about? Do you know? Where are these Islamic leaders who’ve condemned it? Help me out here. I’m telling you, I don’t know. Are there any? Have you seen any? I haven’t. But I don’t want to say there haven’t been any if there are. (interruption) Who? Like who? Give me a name. (interruption) Just say Mohammed, okay? Just say Ahmed. Give me a name. Who? (interruption) Okay, nobody in there can give me a name. Off the top of their heads they can’t remember a militant — sorry — Islamic leader condemning this. I can’t, either. I’m not saying that they haven’t.

This is incredible. Carter actually thinks that these militant acts of terrorism are gonna cause people to get curious about Islam. What they’re gonna be doing, if anything, is investigating it to find out what is it that is inspiring this. I mean, Jimmy Carter, he’s in effect saying Islam must be great, look at how its followers kill people who won’t accept it. Well, that’s what it’s all about, infidels.

Quick time-out. We’ll get to your phone calls when we come back and give continual thanks that Jimmy Carter is no longer president. But actually we’ve got Jimmy Carter’s second term here. And Hillary Clinton is gonna be his third if she ever gets elected, make no mistake about that.

RUSH: Abdel Fattah el-Sisi. He is the current president of Egypt. He was the general who overthrew the Muslim Brotherhood, Obama’s buddies in Egypt. That is why he’s the only Islamic leader of any type that I’m aware of who has come out and criticized militant Islamism. In fact, Abdel Fattah el-Sisi actually has called for a revolution in Islam.

He was in the Egyptian military and participated in ousting the Muslim Brotherhood. Obama’s buddies. That’s way, way, way back there in the Arab Spring. So neither Jimmy Carter nor Obama would have much use for Abdel Fattah el-Sisi. I can’t think of anybody else. Jimmy Carter says, “Ah, all these Muslim leaders denounce it.” He’s the only one that I can recall.