RUSH: John Kerry. This is unbelievable. My friends, I’m embarrassed. I’m literally embarrassed. John Kerry went over to France. They’re trying to make up for the fact that Obama didn’t go and be part of the big rally over there, so they sent John Kerry over for some sort of press conference with the French and the French media and intended for the French people. They actually dragged in James Taylor and Kerry spoke French again, which is embarrassing enough in itself, and then James Taylor sang “You’ve Got A Friend.”

I’m embarrassed to be an American today.

To have to take James Taylor over there, you know what’s gonna happen? John Bolton is gonna be a secretary of state someday we hope, and I can’t wait ’til he goes someplace in the Middle East and takes along with him the famous crock group The Clash and they can sing Rock the Casbah, whatever. And James Taylor (imitating Taylor), “Of course, I’ll be happy to sing You’ve Got A Friend.” He sang it and the French are sitting there listening to this. Oh, my God, what a bunch of wusses, what a bunch of mush. It’s squishy. And the militant Islamists all over the world cannot believe the good luck that they’ve been handed.

RUSH: Okay, the proof for those of you who thought it was a joke that John Kerry actually took James Taylor over to Paris to sing You’ve Got a Friend to the French people and the French media in a press conference, it actually happened. This is continued fallout from Obama not going and not sending anybody to the rally in Paris last weekend. The fallout’s huge. So the State Department, Jean-Francois Kerry (who served in Vietnam, by the way), is trying to make amends.

Marie Harf said, “Hey, we’ve gone out of the way to be conciliatory, be nice to the French. Why, John Kerry’s even speaking French to them!” She actually says that, as though that is an indication of how much we care, and that we didn’t mean to snub them. Our secretary of state is actually speaking to them in their native tongue. James Taylor. You’ve Got a Friend. Whatever. Didn’t he once have a relationship with Carole King way, way back? I’m talking sixties and seventies. (interruption) Oh, no. He did have a relationship with Carly Simon, yeah. I think.

(interruption) Well, I don’t know that they were ever married, but I think there was a tough time. It’s a long time ago. I don’t remember. Wasn’t a big fan at the time. My first Tonight Show appearance with Jay Leno, James Taylor was scheduled to appear and canceled. The producer was real nice guy, Dave Berg, who’s written a book, by the way, now about his time as a producer/booker at the Tonight Show. Dave Berg said, “Look, James Taylor did not cancel because you’re coming on.

“I just want you to know. I don’t want you think that. James, he just had a schedule conflict, and he had to cancel at the last moment. But I don’t want you to think it had anything to do with the fact that you’re on the show,” which told me it was because I was on the show that James Taylor canceled. This is back in my naive days. I’m not even aware that I’m hated and despised, yet. (laughing) Eye-opening things.

RUSH: Here we go, folks. Here we go. This is this morning in Paris at Elysee Palace. Secretary of State Jean-Francois Kerry held a joint press conference with the mayor of Paris, Anne Hidalgo, and here is a portion of his opening remarks.

KERRY: (haltingly) On the day of the living nightmare that began at Charlie Hebdo, I had a chance to share a few thoughts with you from back home in Washington. Today I just… I really wanted to come here and share a hug with all of Paris.

KERRY: I wanted to express to you personally the sheer horror and revulsion —

KERRY: — that all Americans felt for the cowardly and despicable act, the assault on innocent lives. 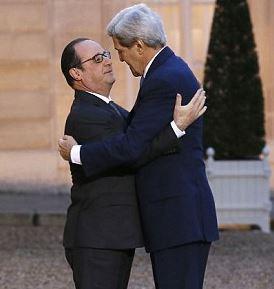 RUSH: Ah, this is not really happening. This is not really happening. This represents some of the greatest plunge, descent in American strength, credibility, and respect. It’s exactly what I feared when they put some guy like Kerry in that job. “I just, you know, really wanted to come here and share a hug with all of Paris.” I’d like to know where Henry Kissinger is today and how he’s reacting to this. Can you imagine Dr. Kissinger sitting wherever he is? He’s probably at… Well, where would he be? Where would he be? Some restaurant still closing out lunch.

Le Cirque, probably. That’s probably where he is, Le Cirque. Maybe he’s at Polo Bar saying, “Where else in the world could somebody like me become secretary of state? All I had to say was I wanted to come and give Israel a huge hug, and I could have a hero!” Can you imagine what he’s saying about this? (Kerry impression) “I just… I wanted to come and share a hug with all of Paris.” The sad thing is the audience probably thought it was great, meaningful, really sincere. And then Kerry tortured them again with his French and introduced — it’s not a joke — James Taylor to sing You’ve Got a Friend.

RUSH: I haven’t seen… Well, I did see a still shot. I don’t see any lighters, candles, cigarette lighters. I didn’t see any. I didn’t. I don’t know that he sang long enough for them to begin swaying back and forth. All I know is, “Winter, spring, summer or fall, all you gotta do is call.” Well, they called, and President Obama stiffed ’em — and instead they get John Kerry speaking French with James Taylor. (interruption) Nobody had to convince James Taylor it’s a good idea! 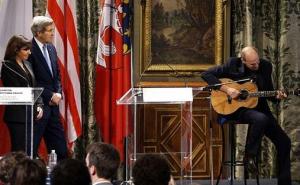 He’s a lib in good standing. This is what counts for substance today. Don’t you get it? He didn’t have… (interruption) It’s not embarrassing. I guarantee you, this is gonna go down in Kerry’s life and in James Taylor’s life and probably some of the French people’s lives over there. This is gonna end up being reported, written about in memoirs as one of the most meaningful days and moments in Anglo-French foreign policy history. You watch! We have had such a descent from seriousness into the symbolic and the sublime.

This is… I guarantee you, the good vibes these people were feeling after this? They think this really mattered today. This is a revolutionary, new kind of foreign policy, smart power. This was empathy, this was caring, this was an emotional demonstration of our commitment to each other. (interruption) Everybody was rolling over in their graves. But I’m just telling you, it’s a new day. I guarantee you when I read my…

I’ll bet you I could find any number of blogs this afternoon when I finish written by young people who think this one of the greatest days they have ever seen and they’ll think more foreign policy ought to be like this, because this is real meaningful. This is more than just some stiff diplomat standing up there talking. This was the United States demonstrating how it really cares. (interruption) Don’t rule it out. Do not rule it out.

Obama with Jay-Z and Beyonce?

RUSH: Okay, so I checked the e-mail during the break, and I got more disbelief. Do you realize how frequently this is starting to happen? You may not. I do. I will mention something happening in the news, and I’ll check the e-mail later, people think I’m making it up. “Surely that didn’t really happen.” Like, “Surely Kerry didn’t take James Taylor and sing ‘You Got a Friend’ to the French to make up for not going to the rally.” Yes. We just had the evidence. I pointed out that Marie Harf, who looks like Marie Harf, said (paraphrasing), “What do you mean we haven’t been courteous to the French? John Kerry spoke to them in French. That shows how much we care.” I checked the e-mail: “Come on, Rush, that couldn’t possibly have happened. Why do you keep making these things up?” Play audio sound bite number nine.

HARF: Well, I wouldn’t put it that way. We have done a number of things to show solidarity with the French people since those awful attacks. He is looking forward to being in Paris. As you know, he has a long history with Paris, speaks French, spoke directly to the French people the day of the attacks. So I think tomorrow will be a very moving day and a one really for the US to stand by France.

RUSH: That was last night on CNN’s Situation Room when she gave us a harbinger of things to come when Kerry goes to Paris. (imitating Harf) “He has a long history with Paris, speaks French, spoke directly to the French people the day of the attacks, see? So I think tomorrow will be a very moving day.” And I think to her this is real heavy stuff. (interruption) No, I don’t think she knows what she sounds like. No, no, no, no.