Doesn’t Anyone Care About the Rules in Politics?

RUSH: You know, folks, something about this. We had the State of the Union last night and we got Obama proposing all these things, and look at what Obama has done to the Constitution. The Constitution’s our rule book, essentially. You talk about monkeying with the rule book and ignoring it and flouting it and flaunting it.

Now, compare that to how upset everybody is over this ball deflation in New England. It’s funny to me how in sports there’s this overwhelming concern for fairness as it relates to the written rules and those rules being enforced as close to accurately as possible and consistently all the time. No looking the other way, the rule is the rule, and if you got evidence somebody broke the rule, you penalize them. But in politics, hardly anybody has anywhere near the same concern. In politics, fairness is a moving target based upon the needs of the Democrat Party.

Now, in professional sports, college sports, any sports, the rule book is about fairness. The rule book is how you establish the way the game’s gonna be played and how you mete out punishment for violation of the rules. And the purpose of the rules is to, obviously, guarantee an orderly playing of the game. And much as I hate to use the word, it applies here, the rules are about making it fair for both teams, right? That’s why this ball business got everybody so bent out of shape.

One team decided, apparently, to flout the rules to make it easier for them on a bad weather day. Now we’re learning that other teams have taken same, similar type measures and everybody is outraged by it. We got people on TV demanding that Bill Belichick be suspended for a year if he’s found having anything to do with this. I kid you not. There are other people out there who think the Patriots ought to be penalized with a lot of money and losing draft choices and that Belichick be suspended for a year.

But is there any similar kind of concern or anger or demand for fealty to the rules in politics? If our Constitution and laws were treated with the same respect as the rules governing major professional sports, do you realize how screwed the Democrat Party would be? Do you realize what a mess they would be in? I mean, voter fraud is one example. But look, Dingy Harry and flouting the rules of the Senate vis-a-vis the nuclear option and whether or not we’re gonna need cloture on a particular vote or whatever.

I mean, the Democrat Party punts the rules as often as they can and dares anybody to do anything about it. And then when the Republicans or somebody stands up, they say, “Get with it, be an adult. This is politics. This ain’t beanbag.” But nobody’s saying that about the deflated footballs in New England or about Spygate. Nobody said, “Come on, Jets, man up. Okay, so they broke the rules, but if you can’t beat ’em on the field, to hell with it. Stop complaining.” No, everybody came down on the side of the rules.

I’m telling you here and now, if the people of this country were as concerned about the rules and the laws, the Constitution or the laws of this country as they are about them being enforced in professional and amateur sports, the Democrat Party would be in major trouble. Let me prove it to you. If the New England Patriots were considered to be the progressives and let’s say, in this case, the Indianapolis Colts were the conservatives, and it was learned that the liberals, the Patriots, the liberals — well, what are they? Well, they’re compassionate and they try to help people and they only want to do good, and they help. But stop complaining, grow up. The Colts would be told to shut up and get with it and focus on their own problems, like racism and bigotry and so forth, instead of complaining about the Patriots breaking the rules. 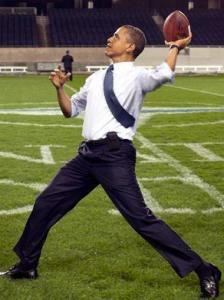 If the Patriots were the progressives in this circumstance, do you think the media and the blogs covering them would do so with the same intensity and hostility? I mean, the Boston media is going after this team like crazy right now, the Boston media, Indianapolis, they’re going after the Patriots, they want to get to the bottom of this. But if the Patriots were Barack Obama, no big deal, right? It’s like the IRS taking out organizations with the word “Patriot” in their names. If the IRS were focusing on the Patriots, if the IRS were demanding that the Patriots change their name because it was offensive to British people, and the Patriots said, “Screw you, we’re gonna do what we want to do,” people would be up in arms.

Why is it in politics the stupider the fans, the better? But in sports we want informed fans. We want ’em playing fantasy football. We want ’em being involved in all this sort of stuff. But it’s really no more complicated than this. Just imagine if the people of this country demanded as much fealty to the Constitution and the rules in politics as they do in sports, and I’m telling you, the Democrat Party would be up the proverbial creek, I’m telling you.

RUSH: Here’s Terry in Nashville. Terry, great to have you on the EIB Network. Hello.

RUSH: Thank you, sir. Appreciate that.

CALLER: Thank you, well, thank you. First-time caller, never dreamed I would have the opportunity to actually speak with you, but I’m honored, and thank you for the opportunity. Listen, I was only able to catch the last part of the State of the Scheme speech last night or whatever, but —

RUSH: Wait a minute. Wait. I like that. The State of the Scheme. Ha-ha.

CALLER: You can use that, my friend. But the most telling thing I heard came toward the end when President Obama clearly stated that he took an oath of office to do what he thinks best for the American people. And I submit to you that therein lies the problem —

CALLER: He actually said, “I took an oath of office to do what I think best for the American people.”

CALLER: Well, now, you know, I do have moments where I don’t think — I am fairly certain, ’cause I looked at my wife and I said, “No, he didn’t.” But you have a crack staff, and you guys, I mean, look that up, but, I mean, I submit to you that that’s the problem there, right there. I mean, that’s not the oath he took. And you dovetailed into it perfectly with your previous comments. He took an oath to preserve, protect, and defend the Constitution.

CALLER: And it also lies at the heart of the debate that needs to continually take place in this country, and I think especially in the Republican Party if they hope to offer a clear alternate vision of government to the people. Because, Rush, this country was founded by men who were familiar, all too familiar with living under government where one person was entrusted with power to control the lives of the masses, and they were brilliant enough to design a system that insured that no one had that power.

RUSH: They were opposed to it like nothing else.

CALLER: You know, today there’s some, and there’s always been people who believe that average Americans are not smart enough left to themselves to control their own lives or their destinies, and we need, you know, a large bureaucracy and Nanny State, if you will, that would reach into every aspect of our lives. But I happen to belong to the camp that believes that people are largely at their best, their most creative and inventive and purposeful when government just gets out of our way and lets us make the decisions that’s best for our families, our communities, and our neighborhoods, and that’s what makes us great.

RUSH: There’s no question about that. You’re absolutely right and you happen to hold the traditional view of the founders, the traditional view of the majority people in this country. I want to go back to this oath business because that’s an excuse. (imitating Obama) When he says, “I took an oath of office to do what I think best.” How many people have you seen get in trouble and they’ve had to come and publicly apologize, and one of the things they say, “I was just doing what I thought best, and you can’t blame me for that, I was just doing what I thought best.”

CALLER: — but we as a people have that responsibility.

RUSH: Well, I’ll tell you what: Government grows, and it corrupts. You have to draw the same conclusion. Okay, I’ve got the full quote here, Terry. (chuckles) Folks, this even worse than you led me to believe. Here’s the full quote from the guy: “If you share the broad vision I outline tonight, I ask you to join me in the work at hand. If you disagree with parts of it, I hope that you’ll at least work with me…” Now, wait a minute. Sorry.

Now, what the Democrats would tell you and the media would tell you is, “No, he’s not saying his oath was to do what he believes best. He’s saying that’s his agenda.” But I will guarantee you that everybody heard it the way you did, Terry. Everybody heard it that his oath is to do what he believes best for America. But even as an agenda, that’s totally indicative of who the guy is and how he approaches this. I’m really glad you called, because that, I missed.