RUSH: Larry in Woodburn, Oregon. Great to have you with us, sir. Hello.

CALLER: I’m so glad you took my call and thanks for taking my call.

CALLER: Deep condolences for the loss of Mr. Kit Carson there. I heard your show on Monday and I’m sorry for you.

CALLER: My question is kind of embarrassing actually. Snerdley gave me a bit of the business there ’cause he thought I was joking. I’m a proud member of the Rush Limbaugh Institute for Advanced Conservative Studies, but I’m here raising my hand. Rush, the distinction that the left is trying to make between Islamic terrorists, Islamic extremists and extremists acting in the name of Islam, what distinction are they trying to make? I’m missing the point. I’m missing what they’re trying to get me to think these people are, other than what they are.

RUSH: I’ll be happy to explain it to you. Because you understand it. You know. You just can’t believe it. Here’s what they’re doing. This distinction saying, “They are terrorists in the name of Islam,” instead of Islamist extremists or Islamist terrorism. It’s terrorism in the name of Islam.

That’s what they want everybody to believe. That’s why they’re drawing the distinction. They actually want you to believe that these are just renegade criminals that happen to live in the Middle East and have decided to put on the uniform of a terrorist, and then they go out and commit acts of terror and then claim that they’re from ISIS or claim that they are from the new Khorasan group or claim they’re from Al-Qaeda.

And what our Regime wants you to believe is that they’re lying. They’re committing the atrocities, no doubt about that, but Islam is a religion of peace. And these people are making a mockery of it and impugning, they are lying. That’s what they want you to believe. That’s the stretch. You understand that. You just don’t think anybody could be serious about trying that. But that’s what they’re doing.

RUSH: Now, earlier we had a guy call and say, “I don’t understand this, Rush. What is militant Islamist extremism and extremism in the name of Islam? What are they trying to tell us?” And I told him. I said, “What they’re really trying to do is make you think that the people committing all these atrocities, acts of terror and beheadings, are not Islamists. They really want you to believe they’re fake.

“They want you to believe it’s a bunch of phonies who are making themselves look like Al-Qaeda or look like ISIS or look like the Khorasan group, whatever, but they’re not, they’re just standard everyday thugs and criminals like every country has, and these people are just a bunch of wacko extremists, and they’re doing it in the name of Islam, and they are doing it to impugn the name of Islam. But we at the Obama administration, we know they’re not Islamists, they’re not Muslims, and that’s why we’re not gonna let them get away with impugning Islam.”

That’s what they really want you to believe. And if you don’t believe that, listen to this. This is the White House press secretary, Josh Earnest, just moments ago. Jonathan Karl of ABC News said, “Yesterday it was said the White House does not consider the Taliban to be a terror organization. Now, come on, Josh, how is that consistent with the designation that the Treasury department has on its list of specially designated terrorist groups, which clearly lists the Taliban? So does the administration consider the Taliban a terrorist organization or not?” Now, listen to this answer.

EARNEST: They do carry out tactics that are akin to terrorism. They do pursue terror attacks in an effort to try to advance their agenda, and by designating them in the way that you have described does allow the United States to put in place some financial sanctions against the leaders of that organization in a way that’s been beneficial to our ongoing efforts against Taliban. Now, it’s important to draw a distinction between Taliban and Al-Qaeda. The Taliban has resorted to terror tactics, but those terror tactics have principally been focused on Afghanistan. Al-Qaeda is a terrorist organization that has aspirations that extend beyond just the border between Afghanistan and Pakistan.

RUSH: So, you see, the Taliban committing acts of terror against their own people in Afghanistan, that’s not terrorism. That’s just the Taliban behaving as a bunch of thugs and criminals. Now, Al-Qaeda, ha, different story, ’cause Al-Qaeda, they do the same stuff the Taliban does, but they do it outside of Afghanistan. Now, that’s terrorism. These guys are trying to slice this so thin, this is actually embarrassing this insult to everybody’s intelligence that this administration is now engaged in.

The Taliban isn’t terrorist because they don’t do it outside of Afghanistan, but they are trying to advance their agenda but it’s just criminal acts, it’s extremism, it’s in the name of the Taliban, as they say. Now, Al-Qaeda, that’s a little different thing, but don’t doubt me when I tell you they are trying to convince you that the people committing these acts of terror is not Muslim. That’s what their objective is. Every society has a bunch of bad guys in it. Gangs, individual rotten criminals, and sometimes we have criminals in this country that try to make themselves look like Jesse James.

We have criminal gangs that try to make themselves look like the Crips when they’re the Bloods. Well, that’s what we have going on here, they want us to believe. It’s just your average, unhappy militant resident of, say, Islamabad who decides to go somewhere and make himself look like an Islamist and then commit acts of terror in that name, but he’s really not a member of any terror group. That’s how finely they are trying to define this. And the reason for it — it’s your wild guess — why they are hell-bent on not admitting that this is inspired by Islam, you tell me.

And before you say anything about Obama, this happened long before Obama came on the scene. The State Department started is doing this under Bush. Terrorism wasn’t terrorism, remember? We couldn’t pronounce the word. We couldn’t call it terrorism. We had meetings at the State Department after 9/11, convened to discuss the proposition on why do they hate us so much, as though we played a role in 9/11. We must have deserved it. We must have done something to tick ’em off. What did we do? Why do they dislike us so much? Well, right now they’re doing everything they can to try to convince you that ISIS, ah, that’s not Islam. 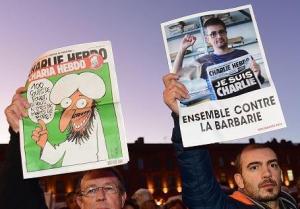 Now, is it that they’re afraid of Charles Hebdo-type things happening here, and they think if they appease them by not properly identifying them, that they’ll leave us alone? Are they that dumb? Are they that shortsighted and stupid? It’s hard to believe that. So what would be the reason? Why go through all of these asinine contortions? “Well, no, this is not terrorism. This is extremism in the name of terrorism! This isn’t Islam. This is extremism in the name of Islam.”

So they’re not really Islamists and Muslims. They’re just a bunch of people that are trying to impugn those nice people from the religion of peace. But it’s not just here. Folks, it’s not just here. Al Jazeera. “Shortly after news broke of a deadly January 27 attack by Islamic terrorists on a hotel in Libya’s capital, Al Jazeera English executive Carlos van Meek shot out an email to his employees. ‘All: We manage our words carefully around here. … So I’d like to bring to your attention some key words that have a tendency of tripping us up.'”

He “warned the network’s journalists against the use of terms including ‘terrorist,’ ‘militant,’ ‘Islamist’ and ‘jihad.’ ‘One person’s terrorist is another person’s freedom fighter,’ the Al Jazeera executive wrote.” That is so old that has become a cliche, but now it happens to be governing policy at the Al Jazeera supposed news network. “The word ‘extremist’ was labeled off-limits,” to Al Jazeera journalists. “‘Avoid characterizing people,’ Van Meek said.” If there was ever a guy with a right name for what he’s doing, it’s this guy.

“‘Often their actions do the work for the viewer.’ ‘Do not use,’ van Meek’s said of the term ‘Islamist.’ He described it as ‘a simplistic label.’ According to van Meek’s instructions, Al Jazeera English employees are not to use the Arabic term ‘jihad.’ … Instead of ‘terrorists,’ van Meek told his employees to use the terms ‘fighters’ and ‘militants’ — but only in certain contexts.” This sounds like it could come from AP. It sounds like it could come from the White House. You know, folks, I got fired once for using the word “therefore.”

Of course I was set up. You can’t not use the word “therefore.” At some point, you’re gonna use it in normal, everyday conversation. But you should have heard the coaching sessions I got. What was happening in my case is they didn’t have a reason to fire me but they wanted to ’cause I was too controversial. But I was a hard worker. I was showing up early every day, staying late, doing everything. I loved it. But they just were nervous about me. They didn’t have any cause.

So they had to create circumstances or orders that I would violate just by being alive that would give them grounds, and one of the things I was forbidden to say was “therefore.” You should have seen this. I mean, the instructions in the memo. “Do not in any further discussions on air use the word ‘therefore.’ The word is confusing to many listeners. To some listeners ‘therefore’ can mean,” whatever. “To other listeners ‘therefore’ would also stand for the fact that you’re calling someone a liar or that you could be expressing disbelief in what you’ve heard.”

It was two weeks later and I happened to use the word “therefore.” I got called in to a coaching session for an hour, and the whole thing was designed to make me frustrated and quit. This is… I’m reliving this, it’s different circumstances, but this is all absurd. So you tell me: Why all of this bending over forwards, backgrounds, whatever, not to describe accurately what everybody knows is happening? What do you think it is? You think it’s just nothing more than fear? There’s got to be something besides fear.

RUSH: Now, here’s the thing about this, folks. This is jaw dropping. So much that he says jaw dropping, and nobody in Washington wants to discuss this. “Muslim scripture…” This is in Andrew McCarthy. Our old buddy here has written about this. He’s trying to get as many people as he can to listen. He’s researched it for trials. Muslim scripture commands Muslims to kill Jews. In the scriptures, Mohammed himself says at the end of the world, Allah will have the trees and the stones help Muslims kill Jews.

There’s no question. And yet all this is going on. “Call ’em this name! Don’t describe this as terrorism,” and while that’s going on, the White House has sent a campaign team to Israel to help the leftist opponents of Netanyahu. Our one ally in the region and Obama has decided to enter the prime minister campaign there and to help advise, and who knows what else, the opponents of Netanyahu. Now, I don’t know if that’s unprecedented. Clinton might have done something similar. I’m not exactly sure. But it stands common sense upside down.