RUSH: When it comes to the Seahawks, folks, this one is actually real. I mean in terms of it being out there as a legitimate news story. This call that happened in that game — I’ll get back to vaccines here in just a second. I’m just setting the table with all that’s coming up on the program today. This thing with that stupid, inexplicable call on the last play of the game in the Super Bowl, do you know that that call, do you know that the reason that call was made was because of latent racism on the Seahawks coaching staff? Yeah, I got it right there in The Nation magazine. And, by the way, not just there, it’s everywhere where you find lunatic leftists.

Well, why does it make no sense? Well, I’ll explain it if you just sit there and be patient. I’ll explain it from the left’s perverted thought process, I’ll tell you how that call was racist. The call was racist not to give the ball to Marshawn Lynch and instead give it to Russell Wilson because the Seahawks and Coach Carroll think that Wilson is a much cleaner cut black guy. He’s a more wholesome black guy than Marshawn Lynch. He’s not as dark as Marshawn Lynch, liberals do, and they have now said that they got a source in the Seahawks locker room that told them this, an unnamed source.

This is exactly how liberals think. Liberals think anything like this cannot happen. There has to be a reason. There has to be a bigoted reason behind everything that they can’t explain, and in this case that’s the Seahawks coaching. Now, we’re in a split-second circumstance here. We’ve got less than a minute. We got one time-out. We’ve got the Super Bowl — this is what’s crazy about the Belichick-is-a-genius rumors. Everybody’s in panic mode at that time. Nobody is traveling along at five miles an hour seeing the whole world go by in slow motion and have time to come up with a reason, genius. Everybody’s reacting here.

So the idea that Belichick is some genius by not calling a time-out and forcing the Patriots into throwing a pass, that’s as ridiculous as this, which is that the Seahawks coaching staff, not just Carroll, but the management, too, they’re tired of Marshawn Lynch. He’s a bad actor, grabs crotch after touchdowns, gets fined, he won’t talk to the media. They don’t want this guy to be the star of the game, no way. They want the clean cut face of the franchise, Russell Wilson, to be the star of the game.

That’s why they didn’t call a play that would win the Super Bowl. And they claim that they’ve got a source in the Seattle locker room, a player, unnamed, that is responsible for spreading this rumor. And there are many other rumors that are variations on that theme. You probably have heard them. But the left is eagerly picking this one up and running with it, racism, bigotry, explains why Marshawn Lynch did not get the call.

RUSH: Grab audio sound bite number five. This is last night on The Kelly File, the Fox News Channel. She’s speaking to a lawyer, the attorney Arthur Aidala about the Seahawk decision to try a pass play instead of giving the ball to Marshawn Lynch, and here you go. 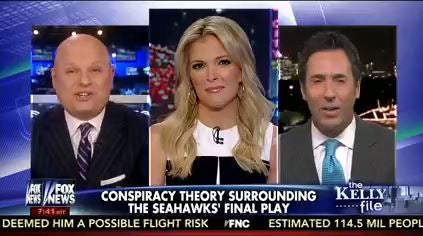 AIDALA: The other theory, which is more compelling and more believable, is that Pete Carroll was almost instructed that the running back who mocked the media, who mocked the system the whole week, could not be the star of the game, could not be the MVP. They wanted Wilson, the quarterback, to be the MVP. People were saying this in the locker room, apparently, Megyn, some of the players are saying they didn’t want to let the running back be the star.

RUSH: Okay. So there you have it. That’s Arthur Aidala, a lawyer on Fox News, and then a bunch of lunatic fringe leftist bigots and racists themselves are out there making the same claim that it was racism behind the call, the politics of race is behind the call not to give it to Marshawn Lynch. And everybody is sourcing Seahawks players.

Now, if Seahawks players, unnamed in the locker room, are telling people in the media that’s what they think, then they got more trouble on that team and they got more trouble in that locker room than anybody has any idea. You got two black guys here, you got Russell Wilson, you got Marshawn Lynch and people are charging racism here because one of them is more authentic than the other. That would be Lynch is more authentically black and therefore the Seahawks don’t like these — you know, the crotch grabbing after he scores a touchdown sometimes, and he doesn’t talk to the media and basically a malcontent. They didn’t want to reward that.

People need to remind themselves they just signed Marshawn Lynch to a massive contract extension. They just announced this Super Bowl week. I mean, it’s not as though they’re trying to get rid of the guy.

RUSH: By the way, folks, one of the ways that you end up, if you’re a lunatic fringe leftist, and if you’re known for believing and publishing lies about conservatives, and if you believe that racism was behind the call to throw the ball instead of giving it to Marshawn Lynch, if you look at this guy who made the claim in his original post to the story, thought that Russell Wilson was biracial and that explained Russell Wilson’s less-than-dark African-Americanism. Russell Wilson is not biracial and so that has been deleted from the original article. But that’s how convoluted these people are.

You know, the leftists are the ones that judge everybody by the color of their skin, their sex orientation. They’re the ones that have bigoted thoughts running through their perverted minds with all of this stuff. They’re the ones obsessed with all of this. If you want to know the roots of this, by the way, I want to remind you we covered the origins of this story even when we didn’t realize it at the time. You remember when the Seahawks got rid of Percy Harvin? They traded Percy Harvin to the Jets, or maybe they released him and he signed with the Jets a free agent. I don’t remember how that went down.

See, he wasn’t down for the struggle. Russell Wilson was too close to the white power structure that owns and manages the team, and there was strife throughout the Seahawk locker room. Remember this? And so Percy Harvin, he couldn’t get along with Wilson. And, by the way, I think the story, he was buddy-buddy with Lynch. So it continues, Russell Wilson continues to be, in terms of leftist media, the focal point of problems in that locker room.

RUSH: It was October 23rd last year that we talked about it on this program, the strife in the Seattle Seahawk locker room. There was a story by Mike Freeman, Bleacher Report. This is one of the many leftist sportswriter that spread lies about me, by the way, during that ill-fated Rams business, that supposedly I missed slavery and that I thought slavery was good and the economy has never been the same since. They were totally fabricated, made-up quotes by a bunch of silly leftists, and they just ran these things as though they were legitimate.

They never called, never checked it out. There were a bunch of them, like Bryan Burwell who has since passed away. I mean, the hate on the left here is just incredible. They don’t care to get anything right or wrong. They just instinctively believe some of the most insane, lunatic assertions made about conservatives, when it is they who harbor the bigotry, when it is they who harbor the hate. Anyway, this Mike Freeman guy wrote that he had sources inside the Seattle locker room that Russell Wilson is out there doing all this PR, doing all these PSAs and all this charity work and getting all this great, puff piece media.

All the while, “He’s sold out. He’s too close to management. He’s not black enough,” and so forth, and Percy Harvin just resented the hell out of all of it and wanted out of there, so they had to get rid of Harvin because they wanted to protect Wilson. He’s the future; Harvin they couldn’t care less about. So Harvin was gonna blow up. Harvin was close to Marshawn Lynch. So they get Harvin out of there. Some people in the leftist media remember that, I’m sure, and somebody in the Seattle locker room tells ’em, “Yeah, you know why Lynch didn’t get the ball?

“Yeah, Seattle doesn’t want that kind of black guy being the star of the game. They don’t want him being the MVP. They want their clean-cut, wholesome black guy,” who they originally thought was biracial to explain his less-than-dark status. Leftist reporters believed this. It is absolutely… They’re the ones that pollute our culture with these kinds of theories. They’re the ones that pollute our culture by reporting this kind of drivel, and then they drive on by. They create this mess, they drive on by down to the next event, and they start blowing it up, too.

They’re in sports; they’re in news.