RUSH: Do you believe it? The news media is out there hyping terrorism again, exactly what the president doesn’t want to happen, ’cause he doesn’t think there is any. He really doesn’t. There’s no terrorism. It’s just a bunch of random-acting folks out there that are doing random acts, mean things to people. But there’s no terrorism about it, there’s nothing organized. It’s just a bunch of unhappy random people doing things. The media is reporting that the fourth, and presumably last, hostage held by ISIS has been confirmed to be dead. That would be Kayla Mueller.

Can you imagine how he’s reacting to this today, the media hyping another American killed by ISIS and ignoring the most important issue out there, global warming, man-made global warming? I mean, that’s what the president’s trying to convince everybody. Man-made global warming is at the top of the list. All of this stuff by ISIS, it’s just random folks doing random things. The president’s already put out a statement on the young woman’s death. I haven’t had a chance to read his statement in its entirety.

Snerdley, did Obama say anything about Kayla Mueller being killed by random shooting from some folks? (interruption) Well, I mean, in case you’ve missed it, that’s how Obama described the attack on that Jewish deli in Paris and on the magazine in Paris where the Muslim terrorists sought out and gunned down some Jewish people, which Obama views as just random shooting like the kinds that occur every night in Chicago. Here’s what he said. This was on the Vox.com website this morning. Matthew Yglesias interviewing Obama about foreign policy, and this is what Obama had to say about terrorism.

OBAMA: When you’ve got a bunch of violent, vicious zealots, uh, who behead people or randomly shoot, uh, a bunch of folks in, uh, a deli in Paris, it is right and appropriate for us to be vigilant and aggressive in trying to deal with that, the same way that a big city mayor’s gotta cut the crime rate down if he wants that city to thrive.

RUSH: So there isn’t any terrorism out there. This is not militant Al-Qaeda. It’s not ISIS. It’s just some zealots, some random folks doing some shooting, bunch of violent, vicious zealots, beheading people. Yeah, violent, vicious folks beheading people. Randomly shooting a bunch of folks in a deli in Paris. Yeah, we should be mad about that, we should be vigilant and aggressive, the same way a big city mayor’s gotta cut down the crime rate, like in Chicago.

It’s no different than that, folks, and all of this hysteria about terrorism is uncalled for and unwarranted, and the media should stop hyping it and get focused on what Obama really cares about, and that’s the government taking over the Internet, something called net neutrality, and of course man-made global warming.

RUSH: Here’s Josh Earnest, the White House press secretary today at the daily briefing. Jonathan Karl of ABC News said, “Is the president saying, as he seems to be implying here, the threat of climate change is greater than the threat of terrorism, Josh?”

EARNEST: There are many more people on an annual basis who have to confront the impact, the direct impact on their lives of climate change or on the spread of a disease, than on terrorism.

KARL: So the answer is yes, the president thinks that climate change is a greater threat than terrorism?

EARNEST: Well, you’re talking about the direct daily impact of these kinds of challenges —

EARNEST: — on the daily lives of Americans —

RUSH: Stop the tape, name one.

RUSH: Back to the audio sound bites here. This is Bob Beckel last night on The Five on Fox. The Drive-Bys are trying to explain Obama and the reason why he’s downplaying terrorism. (paraphrased) “There is no terrorism! There’s just some ‘folks’ doing random shootings.” That’s what he said in the Vox interview. “Ah, there’s just some random shootings. The ‘folks’ are just getting involved.” He will not say “terrorists,” he will not call it “terrorism,” and here’s Bob Beckel’s explanation for why. 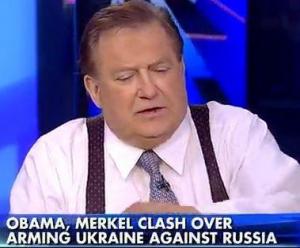 RUSH: Okay. (interruption) What is Beckel saying? Well, okay. Let’s parse it, shall we? Bob Beckel said, “You know what I’ve finally figured out about this, I think, is I think Obama grew up among Muslims. I think he was very strongly affected by Muslims. I think in his dream of dreams he hopes that these guys aren’t really Muslims…” To hell with the dreams. What about real life? Are you…? Well.

“[H]e doesn’t want to call them Muslims because he really does like Muslims.” He doesn’t know Muslims that act like this. “Here’s a guy that was very much affected by Muslims in his life. He had friends who were Muslims. I think he just doesn’t want to make himself believe that they could be a nasty group.” (interruption) You think there’s any more to it than that? What are you…? (interruption) Well, he said he grew up among Muslims; he was strongly affected by Muslims.

In his dream of dreams, he thinks these guys aren’t really Muslims. (chuckles) There’s also the fact that there’s a lot of them, and he just may not want to make ’em mad. (chuckles) Yeah. Yeah. I know. I know. “Walks like a duck, quacks like a duck, but isn’t a duck.” That’s Beckel’s explanation here. Beckel’s finally figured it out. (summarized) “He just can’t believe it. He’s president of the United States, and he just can’t believe that these guys are Islamists. He can’t believe they’re Muslims. He knows Muslims, and they don’t do this.”